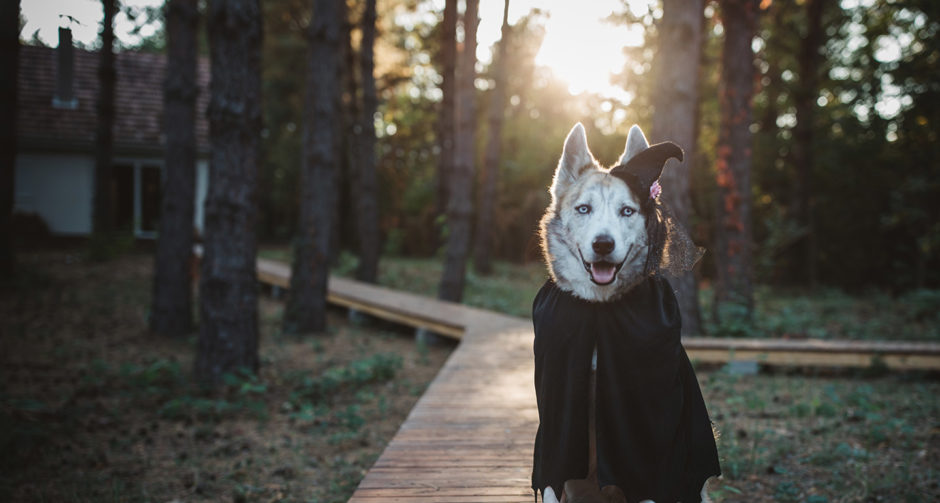 There are thousands of horror films out there. Plenty of fans are committed to these spooky movies—and will drag anyone into the dungeon to watch them. Sometimes, that includes their precious pups, who will stare at the screen and, perhaps, bark when they see a home invasion play out. If you’re among these fright-obsessed cinephiles, why not choose a horror movie name for your dog? That way, when the phone rings and a voice asks, “What’s your favorite scary movie,” you’ll have the perfect horror dog name ready to prove your loyalty.

Browse this list of horror movie names for dogs to find a perfectly chilling name for your new pet.

Uncle Charlie offers the menace while Charlie (short for Charlotte) hopes for the possibility of life being shaken up in Hitchcock’s “Shadow of a Doubt.” This is a gender-neutral name we can all appreciate.

If you’ve got a blonde with a dark past, one of Hitchcock’s most fascinating protagonists from “Marnie” would suit your dog best.

You’d do both Daphne du Maurier and Hitchcock proud by naming your dog after the novel/film “Rebecca.”

Pair your Rebecca with her very own Mrs. Danvers. Please ensure that they are never split up.

I’m not saying you should name your Scottish Terrier after “Vertigo’s” lead character, but ... actually, I am.

If you want an air of mystery, no name is better than Kim Novak’s Madeleine in “Vertigo.”

Mess with your friends by referring to Judy exclusively as Madeleine for a while. If they like “Vertigo,” they’ll get it. (Your dog may suffer from identity issues at some point, though.)

If you have a pair of dogs, why not name them after this devious duo in “Rope”? Buy them tiny suits and martini glasses for Halloween.

Does your dog like staring out of windows? “Rear Window’s” L.B. “Jeff” Jefferies sounds ideal for you.

If your dog hates showers, at least you’ll know it’s because you named your dog after “Psycho’s” Marion Crane.

If you have a female dog, a penchant for horror, and maybe some deep-seated mommy issues, why not honor the greatest mother in cinematic history?

If you use Norma as a name for a mother dog, it only makes sense to use Norman for her child.

Maybe naming your dog after a killer dog movie is not the best idea. Then again, this is possibly the most famous dog in horror history.

If your dog is a big fan of riding in cars, it only feels right to name them after this killer car from the Stephen King novel of the same name.

Please do not bathe this dog with pig’s blood. They deserve better.

Another horrible cinematic mother, also from the novel “Carrie.” With this name, you can pretend all of your dog’s barks are actually fake Bible quotes.

All work and no play makes Jack a dull dog. And this name works to refer to either Jack Torrance or Jack Nicholson, the actor who played him in the Stanley Kubrick adaptation of “The Shining.”

For the timid but persistent pet, try naming them after one of Shelley Duvall’s greatest performances/characters: “The Shining’s” Wendy.

Tell people your dog has “the shining,” just like the son in King’s novel, whenever they walk up to them.

You don’t even need a dog for this one. Just tell people it’s Danny’s imaginary friend.

If you’re bringing in an older dog to keep a younger one company, here’s hoping they’ll form a bond just like Mr. Hallorann and Danny did.

I truly hope you never injure yourself at home because this dog might never call for help, enjoying your “Misery” all too much.

Name your dog after the cat from “Pet Sematary”—but when it’s time, maybe aim for cremation instead of a burial.

Just name your dog It. Then you can explain, “I called it It, from ‘It,’” in hilariously repetitive fashion. (Bonus: If It has a child, call it It Chapter Two.)

Dress this dog up as a clown as often as possible. “It” will appreciate it.

What better name than the fictional town of “Salem’s Lot”?

Ever wonder if your dog has made a pact with the Devil? Faust’s tale has been around and adapted dozens of times onto film since the 1900s.

Name your dog after the German expressionist masterpiece, “The Cabinet of Dr. Caligari.” Bonus points if their doghouse looks like a nightmare.

If not Caligari himself, why not our sleepwalking man forced to murder innocent souls by Dr. Caligari?

What a cute, smart-looking dog!

Nothing says “they’re a biter” like the name of a literal vampire.

If Dracula is too popular for you, why not go for F.W. Murnau’s name for the great count?

Then again, going with the classic vampire name is never a bad idea.

Speaking of Dracula, how about Bela Lugosi, best remembered for his iconic portrayal of the count.

Abraham Van Helsing was ready to hunt down Dracula. Give your dog a cute little crucifix to carry around.

Not the monster, just the scientist (who himself, is—gasp!—the true monster).

Or you could just use Dr. Frankenstein’s first name.

Nothing says you’re a horror fan like naming your dog after Boris Karloff, of “Frankenstein” and “The Mummy” fame.

Speaking of “The Mummy,” get ready to wrap your dog up in toilet paper this Halloween.

Celebrate director Tod Browning, who brought us “Dracula,” “Freaks” and more, by giving your dog a simple name like this.

Best known as “The Man of a Thousand Faces,” actor Lon Chaney could transform into anyone from the Hunchback of Notre Dame to the Phantom of the Opera.

Clause Rains played The Invisible Man, and his name packs a nice mystique.

One of our favorite mad scientists—just make sure your dog doesn’t become a “Re-Animator.”

Celebrate “Friday the 13th,” not with Jason, but with Pamela Voorhees, the OG killer of the series.

But you can also use Pamela’s son’s name, the popular figure we all know too well.

Have your pet Laurie face off against your pet Michael Myers. They’ll eternally be in battle with each other.

Throw in a third dog to the bunch and hope that this one, named after Dr. Loomis, can psychoanalyze your pet Michael.

Hopefully you won’t have any zombies lurking around your backyard, so this dog doesn’t become “Shaun of the Dead.”

One of the best radio DJs in cinema, Stevie Wayne from “The Fog” is a great low-key reference.

If you’re a fan of the “Resident Evil” films, its leading lady offers a perfect name for your pup.

Who doesn’t love a true “Scream” queen? Sidney Prescott is an absolute favorite.

Name your dog after the best reporter in horror history, Gale Weathers from “Scream.”

No Gale would be complete without a Deputy Sheriff Dewey in tow to haphazardly help out and bumble through the killings.

Is your dog afraid of sharks? I mean, who isn’t? So why not go with the last name of “Jaws”’ protagonist.

Move over, Ahab and your boring whale. We’ve got an obsessive shark hunter here in “Jaws.”

The original gal from “A Nightmare on Elm Street,” whose subsequent appearances only made her more amazing.

We’ve also got to include Heather [Langenkamp] who played not only Nancy, but also herself in Wes Craven’s genius “New Nightmare.”

No “Nightmare” would be complete without everyone’s favorite villain, Freddy Kreuger.

One of horror director George Romero’s best films is “Martin”—and it makes a perfect name.

One of Clive Barker’s most notable characters, from “Hellraiser,” it’d be pretty amusing to name your dog this.

Nothing says “I love horror” like a dog named for the iconic Vincent Price.

Truly one of the best protagonists of horror cinema, from Sam Raimi’s “Evil Dead” series.

Celebrate amazing women in horror like Ellen Ripley in “Alien.”

Ripley’s first name speaks for itself.

The main role of “Rosemary’s Baby.” You’ll probably want to make sure your dog is spayed.

Rosemary’s husband, Guy Woodhouse, is a real piece of work—but who doesn’t want to yell “Guy” across the room whenever you want your dog to come running over?

No, not the mouse, but Ruth Gordon’s unforgettable neighbor from “Rosemary’s Baby.”

When you want to let everyone else know your dog is an absolute angel, “The Omen” works best.

Name your dog after the man from “Saw” who created some of the most absurd, and frankly monstrous, traps and scenarios to get people to appreciate their lives if they escape.

Your dog will be the ideal “Portrait of a Serial Killer.”

David Lynch’s most iconic protagonist from both TV and film, “Twin Peaks”’ Laura Palmer is the name to choose.

On the flip side of “Twin Peaks,” special agent Dale Cooper is a great option.

Wesley Snipes gave us a better movie and character than most of what Marvel puts out nowadays, so here’s to “Blade.”

Instead of “The Thing,” maybe go with Kurt Russell’s amazing R.J. MacReady.

The greatest demon of them all, messing with two priests and a young girl in “The Exorcist.”

For any dog who acts like they’re possessed by a demon, Linda Blair’s young Regan from “The Exorcist” is the perfect name.

The sole reason to name your dog this is to say “Quid pro quo, Clarice” to your dog at any given moment, imitating Anthony Hopkins’ voice from “Silence of the Lambs.”

Name your dog after the world’s best-known cannibal.

You can also expand this one to Buffalo Bill if your heart desires.

How about going with one of the few good zombies in cinema: Bub from “Day of the Dead.”

She’s got a great body and she knows how to use it. Karyn Kusama’s underrated “Jennifer’s Body” deserves a fierce pup named after it.

Chucky’s bride is just as much of a treat as the man-doll himself. Now imagine your dog with Jennifer Tilly’s wonderful voice.

After Dario Argento, one of the best Italian horror directors of the ‘70s and ‘80s, who brought us “Suspiria” and “Profondo Rosso.”

Hitchcock, of course, whose “Psycho” and “The Birds” inspired fear in us all.

After Tobe Hooper, the man who gave us “The Texas Chainsaw Massacre” and other horror classics.

Sam Raimi brought us not only the “Evil Dead” series but gems like “Drag Me to Hell” and “Darkman” (not to mention the best “Spider-Man” films to date).

As in Craven, who gave us everything from “A Nightmare on Elm Street” to “Scream” and beyond.

This name does double director duty. It could refer to Cronenberg, the master behind “Videodrome,” “Crash,” “The Brood” and more; or Lynch, creator of “Eraserhead,” “Twin Peaks,” “Blue Velvet” and more.

Get yourself two dogs who look very similar and send them to your neighbors’ house to harass them with a note for eggs attached. These dogs might get up to some “Funny Games.”

Name your dog after the cheating husband from “Les Diaboliques,” because who among us doesn’t love a good cinematic bad guy?

Who can ever forget the first time they saw “Audition” and witnessed what Asami could do to a man?

If your dog has long, black hair, name them after Sadako, of “The Ring” fame. (You can also use the English language remake name of Samara)

“Let the Right One In’s” young vampire has the best name for a best friend you could ask for.

Why not roll with the marvelous child from Guillermo del Toro’s “Pan’s Labyrinth” as your name of choice?

We may have listed over 100 horror movie names for dogs, but there are hundreds more to be found. Maybe they’re lurking in your closet right now. Maybe they’re hiding under your bed. Maybe they’re waiting in your dreams. Or maybe, tonight, instead of feeling the weight of your dog jumping into bed by your feet, you’ll feel something different. Something spectral. Something pulling at your leg. Something … slobbering? No, wait, that’s definitely my little baby Xenomorph trying to eat me alive.