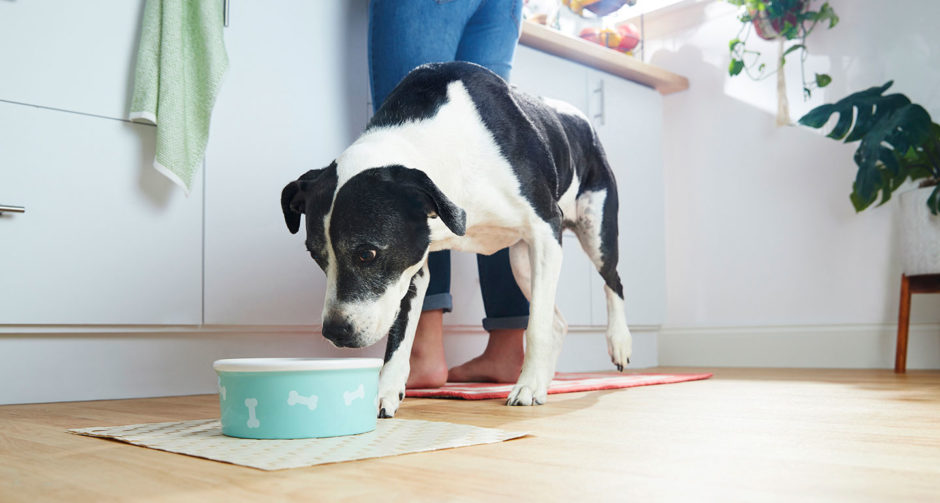 When a dog has cancer, their diet can play a significant role in their quality and length of life. But for pet parents, knowing the right foods to offer is often confusing.

Cancer has the ability to affect every step of a dog’s digestive process. The disease and its various methods of treatment can cause a lack of saliva and growth of mouth ulcers. Nausea, vomiting, diarrhea and loss of appetite are also side effects. In other words, a dog’s quality of life can be greatly diminished.

Some parents of dogs with cancer are so anxious to comfort and show love to their furry friend that they overfeed their pet. Others feed their pup unhealthy commercial or home-cooked meals, says Adam Christman, DVM, MBA, co-chief of staff at Brick Town Veterinary Hospital in Brick, New Jersey. Both are blunders that could make the dog ill or even promote cancer growth, Christman says.

That's why it's vital to consult with a veterinarian, oncologist or animal nutrition specialist to ensure you feed your dog the proper diet.

“One of the biggest mistakes I see owners make is going to unreliable resources, like the internet, their friends or big-box retail employees, instead of the veterinarian, oncologist or veterinary nutritionist,” Dr. Christman says.

Dogs with cancer go through complex biologic changes that require a delicate nutritional balance. While there are some basic guidelines you can follow, dog parents should partner with their veterinarian or other canine health care specialist to determine the best dog food for cancer patients.

Why Diet Is Important When Your Dog Has Cancer

To understand why diet is so important for dogs with cancer, pet parents should know that cancer is primarily fed through oxygen and carbohydrates, says Carol Osborne, DVM, of Chagrin Falls Veterinary Center and Pet Clinic in Chagrin Falls, Ohio.

“We can’t adjust the oxygen, but we can adjust the carbs,” explains Dr. Osborne, who says a third of her practice involves treating patients with terminal cancer. “We prescribe diets in which we try to maintain the animal’s body weight and body condition as we try to starve the cancer.”

Dr. Osborne, who has conducted research on cancer in animals, says studies indicate that cancer cells can't use fat for energy—but they feast on carbohydrates. And higher levels of omega-3 fatty acids may actually help reduce tumors, she adds.

Sarah Smock of Alexandria, Virginia, lost Mandy, her red Golden Retriever, to cancer just before Mandy turned 10. Mandy was well cared for by her pet parents. In fact, she had a blood test the month she was diagnosed with cancer. The results were negative. The veterinarian told Smock that Retrievers often hide symptoms of cancer. Smock theorized that Mandy had done just that.

Now Smock feeds her new Springer Spaniel, who's almost 10, a diet with fewer carbs. There have been no cancer scares.

The right mix of foods can play a role in longevity, too, some believe.A veterinarian outlined a high-protein diet for the 18-year-old dog of Emelie Dunham who lives in Knoxville, Tennessee. Daisy, a hound mutt, was diagnosed with cancer six years ago and is still living a quality life. At first, the family found it hard to stick to the diet, because they had a second dog who was allergic to Daisy’s prescribed beef and chicken. After consulting with their veterinarian, the family switched Daisy’s diet to lamb, fish and duck. The effort has yielded positive results.

“She has had various cancers and tumors for the past six years,” Dunham says. “I think she’s made a deal with the devil and will outlive all of us!”

What to Feed a Dog With Cancer

The ideal diet for dogs with cancer is as unique as each dog themselves. But there are general guidelines many vets follow.

Sara Ochoa, DVM, of Whitehouse Veterinary Hospital in Whitehouse, Texas, says that a primary goal of feeding a dog with cancer is ensuring they maintain their body weight. That’s why it’s important for pet parents to avoid making drastic changes to the dog’s diet until they have consulted a veterinarian, oncologist or another specialist.

“One major mistake owners make is switching up their food a lot,” Dr. Ochoa says. “That can lead to diarrhea and vomiting. This is not something we like to see with our cancer patients.”

But that doesn’t mean no variety at all. It’s often wise to mix and match foods to give dogs a variety in taste, especially if dogs are undergoing chemotherapy, she says.

“Similar to humans, their taste buds are different, and hence providing a healthy array of foods without causing a food aversion is an important understanding,” Dr. Ochoa says. “You shouldn’t put your dog on a [limited] diet unless enforced by the veterinarians.”

For dogs diagnosed with cancer and without other dietary or health concerns, Dr. Osborne recommends a diet full of easy-to-digest fatty proteins like chicken, turkey, pork, fish and eggs. Pet parents can look for these ingredients in store-bought dog foods–Primal is Osborne’s brand of choice–or prepare homemade dishes with those ingredients, she says.

One ingredient to avoid: Beef, which is difficult to digest so should be avoided, Osborne adds.

Pet parents who cook their own meals for their dog should ensure poultry, pork, fish and organ meats such as liver are thoroughly cooked to kill microbes both inside and on the surface of the meat, Dr. Christman says.

Also, remember that you want your dog to maintain their weight.

“You are not looking for lean cuts. You are looking for cuts with fat,” Dr. Osborne says. “When it comes to vegetables, look for cruciferous ones. Broccoli has almost as much protein as steak. And certain cruciferous vegetables, including cauliflower and turnips, have cancer-fighting properties.”

Another point to consider is that dogs react to smell. If your dog begins to lose their appetite, lightly season their food with dog-safe spices like cumin, coriander, turmeric and ginger, just as you would your own food, Dr. Osborne says. Adding a bit of pepperoni or sausage can also entice a dog to eat.

Supplements to Give a Dog With Cancer

Supplements can also ensure your dog with cancer has a balanced diet, especially if the parent is cooking the food, Dr. Ochoa says.

“Recently people have been reaching for CBD oils to help with appetite and cancer,” she says. “CBD should be discussed with your veterinarian to make sure it will not interact with any other treatment they are receiving. At this time, we have limited research done on the effects of CBD in cancer patients.”

“With cancer, there can be a muscle-wasting effect that leads to weight loss and overall weakness,” he says. “Iron is a key component of hemoglobin, which binds to and transports oxygen around the body. Cancer and chemotherapy can contribute to anemia, so giving an iron supplement to cancer and other chronic disease patients can help combat anemia.”

He adds that B vitamins are essential for the immune system and digestive tract function. Amino acids are the basic building blocks of proteins, which form muscle and other body tissues.

Also, blue-green algae have been shown to have anti-cancer effects, along with a potent anti-oxidant combination to help reduce cellular damage in all body systems, he says.

Superfoods That Are Good for Your Dog

Veterinarians all have different go-to human foods they recommend for their patients. Organic, high-protein and cruciferous foods are often high on their lists for their cancer-fighting properties. Some of the most popular include:

Again, no one diet suits all dogs with cancer. Vets’ dietary decisions are based on a dog's history, other diseases the pet might have, and the stage and type of cancer.

However, a general rule is to avoid grains or choose food that has as few grains as possible.

“The most dramatic metabolic disturbance occurs in carbohydrate metabolism,” Dr. Christman says. “Cancer cells metabolize glucose from carbohydrates through a process called anaerobic glycolysis, which forms lactate as a byproduct. The dog’s body must then expend energy to convert that lactate into a usable form. The end result? The tumor gains energy from carbohydrates, while the dog suffers a dramatic energy loss.”

Many commercial dog foods have grains because they are inexpensive fillers. If you must buy one to feed your dog with cancer, make sure that the first ingredient on the label is protein and any grains are at the end of the list.

But vets caution that not all dogs with cancer respond well to high-protein diets. In fact, Dr. Christman warns a high-protein diet may have negative results for some dogs, specifically those who have both cancer and other medical concerns, such as kidney failure. Again, pet parents should consult with their specialists to determine if a high-protein diet is right for their dog.

The Limits of a Good Diet

Don’t expect a diet to produce miracles. It’s only one part—albeit an important part—of your dog’s cancer treatment plan. Chemotherapy may be a part of that plan, too, although chemotherapy treatment for dogs differs from treatment for humans because “our goal is not always to cure them of cancer as we do for people, but to make them feel much better,” Dr. Ochoa says.

"A dog has no quality of life if she is vomiting all the time,” she continues. “We do not push our dogs to some of the extremes that people with cancer go through.”

For Brette Sember of Clarence, New York, managing her dog’s diet is an important part of his cancer treatment.

Sember is a long-time Golden Retriever dog parent who currently has a 4½-year-old female named Pellinoire and an 11½-year-old male, Merlin. Merlin had a hemangiosarcoma removed in April 2018, underwent chemo infusions and now is on metronomic chemotherapy in pill form.

“The cancer has not recurred, at least not visibly, but my vet says that it will at some point,” says Sember, who previously lost three Golden Retrievers to cancer.

Sember conducted extensive research on food and consulted with her vet about what foods would be best for Merlin.

“I compared a lot of different foods and got my vet's opinion once I had narrowed it down,” she says. “I did consider a grain-free food, but my vet did not recommend it. I originally wanted organic food but could not find one that was not grain-free that rated high enough and was at a reasonable price point.”

Besides the food recommended by her vet, Sember routinely feeds raw fruits and vegetables, usually organic, to her dogs. She also feeds them organic chicken with a bit of chicken broth.

“This started because Merlin struggled with nausea and adding chicken and rice to his food was the only way I could get him to eat," she says. "For us, the food was just one component of our plan to try to beat cancer."

And while there are no guarantees, vets have seen results with specialized diets.

Dr. Ochoa recalls a cancer patient named Lucy, whose owners did not want to pursue chemotherapy for the otherwise healthy, happy dog.

“In her last few weeks, she would only eat high-energy, high-calorie food that we usually give our patients who are recovering from surgery.  Her owners did everything they possibly could for her,” Dr. Ochoa says. “She lived about 5 months after her diagnosis. That is a long time for dogs that do not undergo chemotherapy.”

Receiving a diagnosis for your dog can be one of the scariest things you go through as a pet parent. A proper diet, with input from your vet or other pet care specialist, is one weapon in your arsenal that can help in your battle.

Keeping Your Dog Happy and Comfortable Through Their Cancer Battle

8 Superfoods for Dogs (That Your Dog Will Happily Eat)