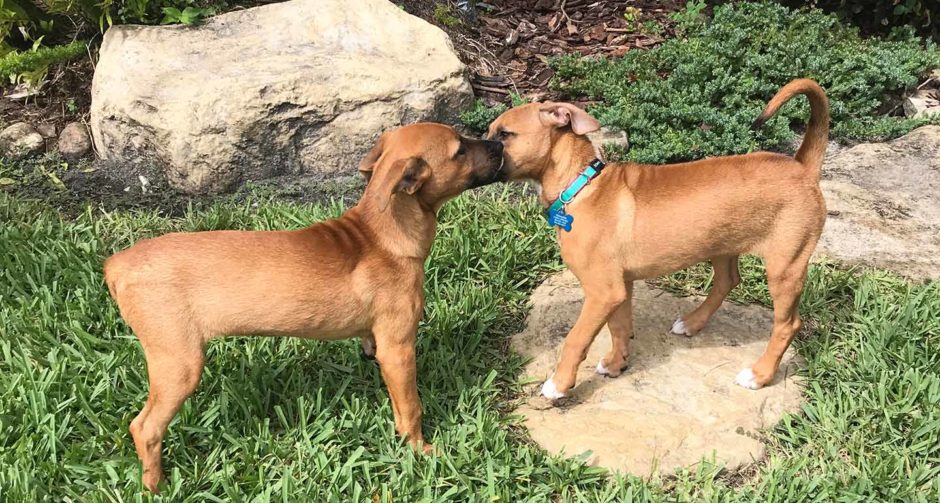 Do dogs know their siblings, even after they’ve been separated? The story of Lilly, Blue and Lulu makes a compelling argument.

It was a lazy Sunday afternoon and Lilly and Blue were relaxing in the cool grass of their backyard when Lulu hesitantly walked through the gate.

At first Lilly and Blue were too comfortable to be bothered to greet their company. Then, a breeze wafted through the air and two small noses began to twitch. Lilly rose from her soporific state and slowly approached the small brown creature. The two dogs—identical except for the pink collar Lulu was wearing—stared at each other for a minute. Suddenly two pairs of eyes widened and the sisters slowly inched toward each other until they were nose to nose.

As if given permission, their brother Blue joined the girls. For a good 10 minutes the puppies, litter mates who were rescued from the street by 100+ Abandoned Dogs of the Everglades in southeast Florida and separated about two months earlier, reacquainted themselves with each other. Rescue founder Amy Roman keeps track of each dog in her care and occasionally sets up dog sibling reunions for the pups after they’ve found forever homes. 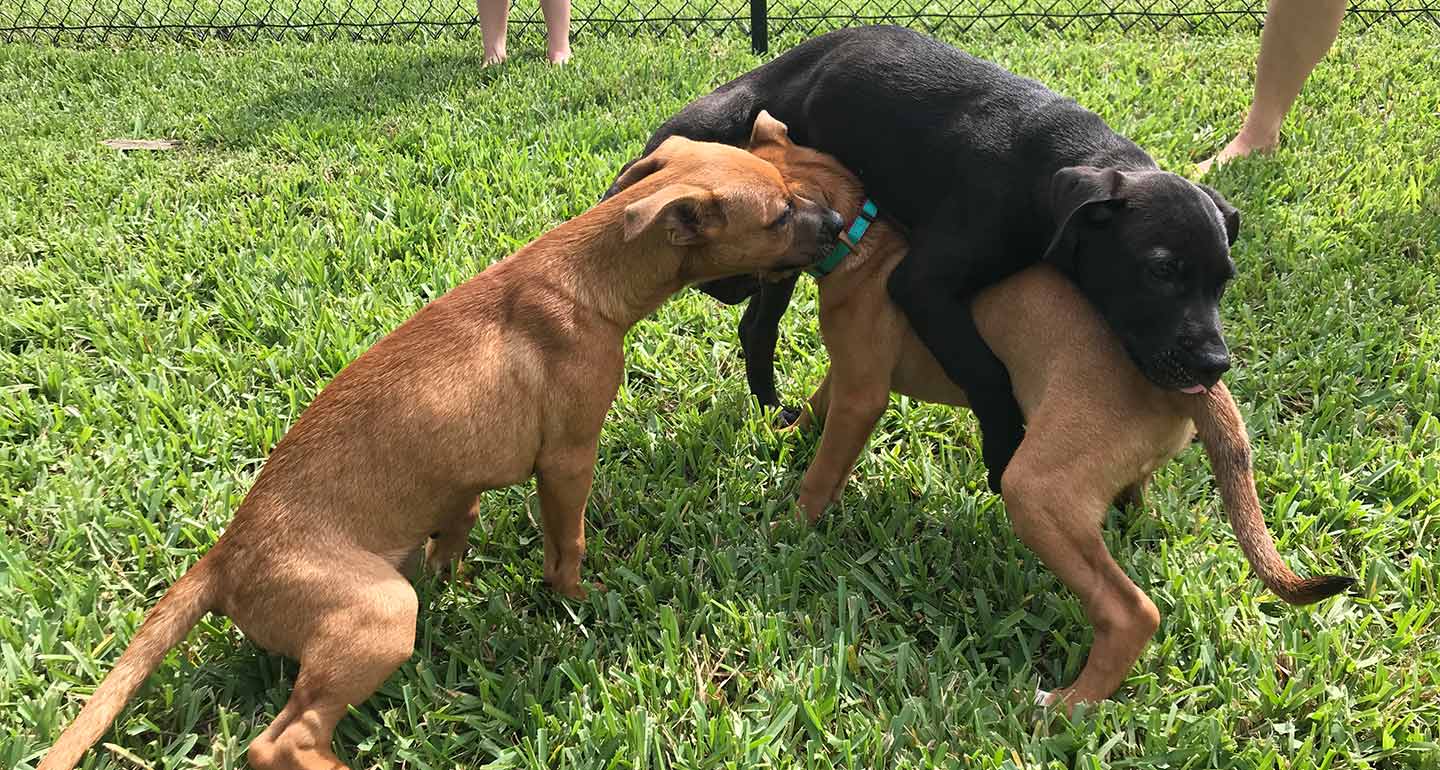 Mindy M., who prefers not to share her last name due to her work in law enforcement, adopted Lilly and Blue in October with her husband, Nick. She was astounded by the puppies' behavior when they saw Lulu.

"I've had the neighbor's dog come over and they won't go near him. They've been pretty disinterested in other dogs, but they knew Lulu,” Mindy says. “Once they got her scent, they were loving up all over her, like, we missed you."

Derek F., a colleague of Mindy’s who also declined to share his last name, agrees. He and wife, Brooke, adopted Lulu from the same shelter after seeing pictures of Lilly and Blue on Mindy’s Facebook page and going to check out the rescue for themselves. After witnessing the reunion, he's convinced the pups recognized each other.

"I really think they knew who Lulu was,” he says. “I have another dog, Fenway, and Lulu doesn't act that way with him."

The three puppies, along with another male, were abandoned in a box, Roman says. In her experience, finding litters of pups with no mother around happens frequently.

"We never ever leave a mommy dog behind,” she says. “Unfortunately, there are so many litters in the rural parts of Miami."

The dogs, originally named Al Pacino, Meryl Streep, Robert DeNiro and Sandra Bullock and seemingly American Bulldog/German Shepherd mixes, were taken to a foster home where they were cared for until they were old enough for adoption. In this case, two of the dog siblings were adopted at the same time. Usually, Roman says, littermates are all separated when they’re adopted.

Roman’s sibling reunions are a hit with pets and their parents. Still, Roman thinks the experience is more for the dog parents than the dogs.

"I remember one reunion we had. The puppies hadn't seen each other in about a year,” she recalls. “They all played in the park and got along really well. But did they look and say, 'that's my sister?' I think that's a human emotion we place on the dogs."

Still, Roman says, whether or not the dogs recognized their long-lost siblings, the afternoon was a success.

"We had a beautiful photo shoot of them all sitting a circle," she says. 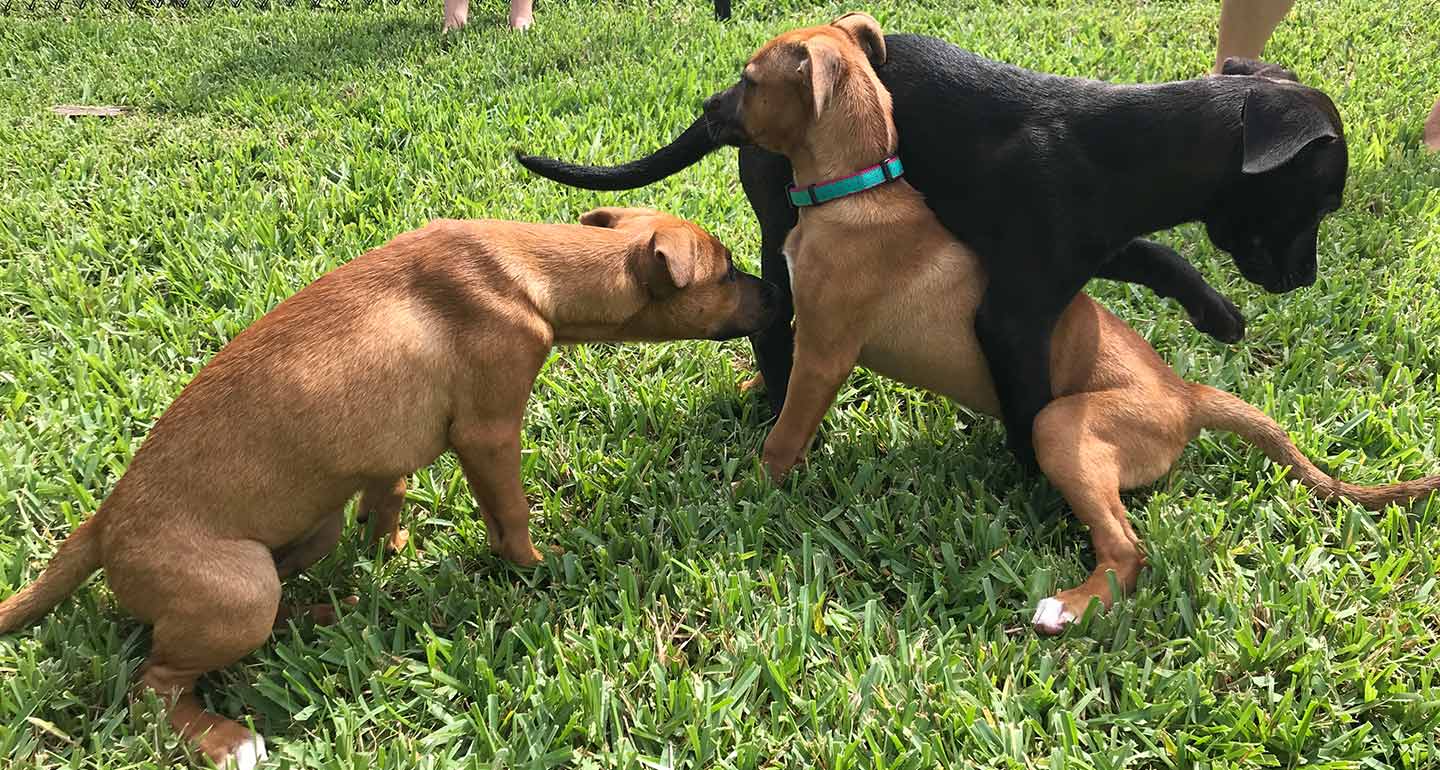 Do Dogs Really Know Their Siblings?

Though the internet is filled with dog sibling reunion videos, Yolanda Ochoa, DVM, regional veterinary director with home veterinary service Fetch My Vet in southeast Florida says that we'll probably never know for sure what the pups are feeling.

"I guess it's possible that siblings recognize each other. We do know that dogs have long term memory,” she says, adding that experiences that occur between the ages of 8 and 16 weeks in a puppy's life really imprint on their brain. If littermates were together during that time, there could be a chance they would recognize each other in the future.

Dr. Ochoa says that other factors like pheromones, basically hormones that animals can smell, might play a part too: "Dogs can uniquely sniff out a dog they've smelled before."

And who knows, she says—dogs may even have a sixth sense that humans can’t understand. "Dogs sometimes gravitate to certain people. They might be doing the same thing with other dogs."

Still, she says, it's unclear whether dogs recognize their brothers and sisters. "Since they don't talk and we can't read their minds, we'll never know for sure."

How to Find Your Dog’s Siblings

Reuniting your dog with their littermates can be a fun and heartwarming experience. But if you’re wondering how to find your dog’s siblings, be warned: It isn’t always easy, says Amanda Chussler, assistant director of the Tri County Animal Rescue in Boca Raton, Florida. In most cases, the parents of both pets must agree for their records to be shared in order to connect with their long-lost family members, she says, and few shelters set up playdates like those held by Roman and her Everglades rescue.

Still, if you want to try reuniting your pup with a long-lost sibling, it’s worth asking the shelter about the possibility. Dr. Ochoa says sibling reunions are a positive experience for dogs.

"Any socialization that's positive is a good thing,” she says. “Dogs need to do dog things with other dogs. It's good for their brains and healthy for their psyche."

For family reunions, Dr. Ochoa recommends introducing the pups at their own pace.

"I think we should always remember they're dogs and there's a limit to their abilities,” she says. “Sometimes they don't understand what's going on in an environment and they might react."

Lilly, Blue, and Lulu have the best of all possible worlds. From a rough start, when they were found abandoned, they now have their own new families. Lilly and Blue have gained a human brother, Nicholas, while Lulu is getting to know her 3-year-old dog brother, Fenway.

The families that have adopted the lucky pups are also planning regular play dates so the puppies can grow up together. Says Derek, "I'm curious to see how they'll all react to each other six months from now. I think they have a real bond."