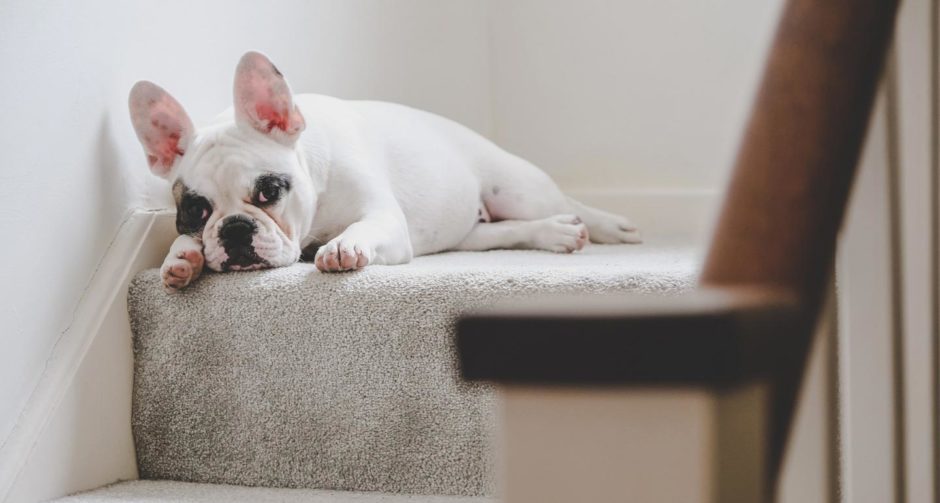 Do dogs get bored? The short answer is yes, they do. And when they’re bored, they often act out, which can affect the whole household—and even the entire community. That’s a lesson I learned from my friend Frank Rubio, pet parent of Tug, a Pit Bull.

Tug was a real handful, Rubio told me. When Tug was left to his own devices in the backyard, he took to chewing on anything available. Rubio recalls one time when Tug chewed through the fence and had a great time with the neighbor’s Great Dane, Thor, the two of them getting into a bunch of cleaning supplies together.

There, they found a bottle of bleach that they broke open and dragged around the house. (Luckily, neither dog ingested any bleach.)

Rubio came home to find his dog in his backyard unusually content and docile. At first, Rubio was quite pleased. Until, that is, he heard from the neighbor.

Tug wasn’t a “bad” dog. He was just easily bored and, when left to his own devices, got into “trouble.” The old saying is that an idle mind is the devil’s playground, and that is particularly true of our canine companions.

What Causes Boredom in Dogs?

Behaviors like chewing, digging and foraging are natural for canines, says Patrick Melese, DVM, Dipl. of the American College of Veterinary Behaviorists and owner of Veterinary Behavior Consultants in San Diego, California. And when dogs are bored, if not given an alternative, they do what comes naturally.

Dylan Maxwell Blau, a professional dog training expert and behaviorist, and owner of Epic Dog Pros in Long Beach, California, says the fault for wayward behavior in bored dogs lies not with the dog, but the owner.

“The No. 1 thing we see is dog owners who don’t live up to the potential of the dog,” Blau says. “Right now, my dog is looking at me and wondering, what’s next? A dog is a companion animal and they want to do stuff. It’s probably bored with you.”

“If you define boredom as the need for intellectual and physical stimulation, then, yes, most pet dogs don’t get their basic needs met,” agrees Stefanie Schwartz, DVM, Dipl. of the American College of Veterinary Behaviorists, a board-certified veterinary behaviorist in Southern California.

Signs of Boredom in Dogs

Dogs can’t explain in words when they need a little action in their lives, but they have several other ways of letting you know. In the presence of their parent, they may:

If you’re lucky, your bored dog may just take a nap while waiting for the next adventure.

However, many dogs don’t get bored until their parent is not present. That’s when they act out in common ways such as:

“All of these are normal dog behaviors.” Dr. Melese says. “They are exploring and trying to entertain themselves.”

Sometimes, what may be perceived of as “boredom” can be something more problematic, such as separation anxiety in dogs, confinement phobia or territorial aggression, Dr. Melese says. These issues can require consultation with a veterinary behaviorist.

How to Help Your Bored Dog

The old saying that a tired kid is a good kid can also be true for dogs. So, if you want your furry friend to stop their bored misbehaviors, there are plenty of boredom busters that veterinary behaviorists recommend.

Dr. Schwartz says most dogs were bred with a purpose in mind, and for many breeds, that was to be a working dog.

Blau says many communities have organized “pack walks” where pet parents and dogs can get in some socializing and exercise.

“Put your dog on a predictable walk schedule and relax into routine,” Dr. Schwartz says. “The routine is important.” If your own schedule is too hectic to stick to a schedule, consider hiring a dog walker.

Dogs love to chase and show off their fancy steps, so and agility drills and training are a great way to work out your dog without wearing yourself out in the process. These activities also strengthen pet parents and pet bonds.

“It’s an opportunity to have fun with your dog,” Blau says.

Doggy day care is another place where dogs can receive mental, social and physical stimulation. The social interaction and play day care provides can be exhausting for pups—in a good way.

“Often the next day, the dog is ready to lay low,” Dr. Melese says.

Dogs are born to chew, so the importance of a good bone cannot be overstated. There is no shortage of bones and natural chews and dog chew toys on the market to satisfy a dog’s teething needs.

“It is important to make sure the bone won’t shatter or injure the dog’s mouth and that it’s not toxic,” Dr. Melese says.

The right bone can often save your favorite shoes, or couch. Learn about five long-lasting dog chews.

Puzzle toys with either treats or toys inside can keep a dog engaged, Dr. Melese says. It’s important for dog parents to figure out whether and what treats and toys trigger a dog’s interest, and then determine the level of complexity it can handle.

Dr. Melese tells the story of Mika, a 14-year-old mixed-breed dog, who would become anxious at night and kept her owner awake with pacing and whining. The dog was introduced to a snuffle mat, where the owner hid treats for Mika to seek out. Giving the dog a nightly routine and activity eased Mika’s anxiety.

A Room of Dog’s Own

Blau recalls a client whose French Bulldogs had destroyed a $10,000 sofa and were on their way to ruining a $5,000 sofa before they were trained not to chew. The training incorporated the right bones for the dogs as well as learning to rest in a bed the owner set up for the Frenchies.

Often dogs just need a place where they can relax and destress, says Blau. Many dogs who work for police, or emergency response, actually find their crates as places of refuge. The same can be true for house dogs. Again, routine and repetition can help dogs get comfortable in their own special space, he adds. Learn how to create a Zen space for your dog.

Some dogs appear drawn to television, although Dr. Schwartz says there is no scientific proof that dogs react to television or music consistently. Dr. Melese, however, disagrees and has consulted with a company in Southern California that is developing programming that targets dogs with visuals and sounds of other dogs that he says has proved very engaging to some.

The experts agree there really are no one-size-fits-all solutions.

“It really depends on what the dog is into,” Blau says. “Some dogs are not food driven; others are. It’s problem solving. It’s trial and error.”

But though the tactics may differ, Dr. Melese says, the goal should be to “set the dog up for success so the dog isn’t coming up with things to do that you might not like.”

For Tug the dog, the solution was exercise. Rubio was a morning jogger, and Tug began tagging along on his runs.

“I would spend the first half of the run being tugged," says Rubio, pantomiming the push and pull of their tandem exercise. "The other half I'd spend tugging him."

As it turned out, five miles in the morning and some playtime and a walk in the evening made Tug a happy boy.

How to Stop Your Dog From Chewing on Your Things

What Type of Exercise Is Right for Your Dog?