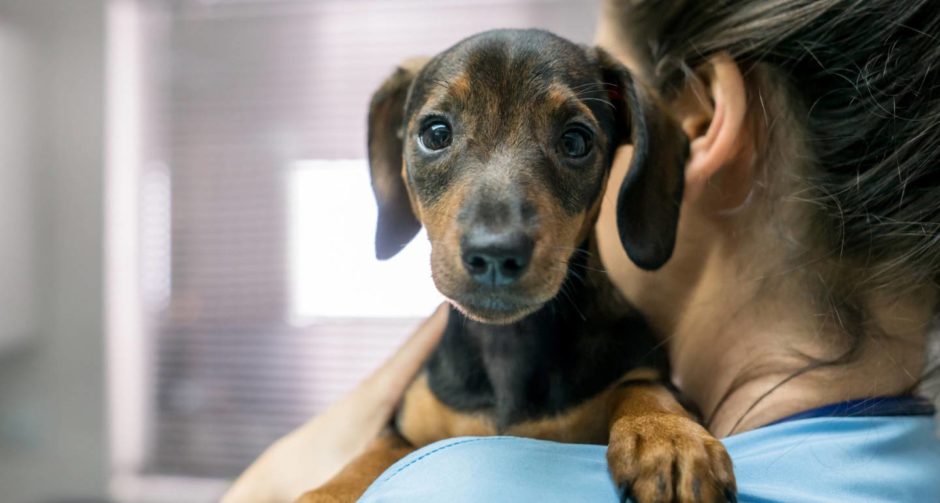 Have you ever watched some of those veterinary shows on the Animal Planet network? My son, who is 8, loves the show called “Monsters Inside Me,” which focuses on people who get infections, notably those caused by parasites. During an episode, he asked me if animals get parasites like people, and I replied, “Well, of course and a matter of fact, many animals harbor parasites that can then get transmitted to other animals and people.” The fact that a TV series can focus on parasitic infections exemplifies their importance and interest to veterinarians and medical doctors.

This article focuses on parasites and puppies. Puppies are immature dogs, and the word “puppy” describes dogs from birth to sexual maturity, which is around 4 to 6 months of age. It varies depending on the breed. You may have heard the term “deworm” which is, basically, treating for parasites using drugs called anthelmintics. Given the term deworm, people seem to mainly think about worms, but a couple of other categories of parasites are worth mentioning.

There are five main groups of parasites that commonly infect puppies:

Only a few of these parasites can be easily seen: tapeworms, whipworms and roundworms. The rest are microscopic, and they are identified in body fluids, primarily in the feces. So, if your puppy has diarrhea but you don’t see any “worms” that doesn’t mean parasites are not the cause! The most important being roundworms, hookworms, coccidia and tapeworms.

What Parasites Are Most Common In Puppies?

While parasites can infect dogs at any life stage, puppies are a concern because they don’t have a mature immune system, they don’t have a lot of fat stores to use for energy and they have higher fluid intake demands than adults. Because most of the common parasites cause inappetance, diarrhea and vomiting, loss of fluid is more harmful to puppies than adult dogs. Some parasites are spread to puppies through their mother via the placenta or through mother’s milk — roundworms are a key example of this. The following table gives you an idea of how common these parasites are:

So, in puppies, the greatest concern is infection with roundworms and hookworms because they are very common and cause serious illness. Tapeworms and whipworms, while sometimes found as frequently or more often, don’t cause as serious of disease in puppies.

Symptoms And More Of Specific Parasites

Diagnosis Of Worms And Other Parasites In Puppies

Some puppy parasites are large enough to see and can be found in the feces or on the areas around the anus. I would say the most common is the tapeworm. Tapeworms are made up of segments (proglottids) where their eggs are contained. They shed these segments in the stool, and many puppy owners see these segments in the stool, on their puppy’s fur or on the ground. They look like small maggots or cooked rice grains that move — YUCK!

Even if you see parasites in your puppy’s stool, a veterinarian should still examine him to determine exactly what is infecting your puppy. Choosing the treatment, knowing if the parasite is a danger to you, other pets or your family, and the need for environmental/home cleaning all depend on the type of parasite causing the infection.

Have you ever been asked by your veterinarian to “bring in a stool sample”? Well, that’s what we examine to search for parasite eggs and microscopic parasites. This is the most common method to diagnose roundworms, hookworms, whipworms and coccidia. Other parasites, namely whipworms and Toxoplasma, don’t shed their eggs routinely in the stool. There are other tests of the blood and serum for those parasites whose eggs are not readily found in feces; these are mostly used for Giardia.

Treating Worms And Other Parasites In Puppies

Many treatments are available for control of parasitic infections, and these come in many formulations: pills, chewable dog treats, liquid, granules added to dog food, pastes and injections. The benzimidazoles are most popular and include drugs like fenbendazole, mebendazole and albendazole. This class of anthelmintics (anti-parasite drugs) are used to treat roundworms, tapeworms, hookworms and whipworms. A typical treatment protocol would be to give the product for one to three days and then repeat the dosing in two to three weeks. The repeat dosing is used to kill the parasites that were not adults (eggs, larvae) during the first treatment but have now “grown up.” Most life cycles of puppy parasites are around three weeks long.

ther parasite treatments include praziquantel, used for flukes and tapeworms; pyrantel pamoate for roundworms and other nematodes; and macrocyclic lactones like ivermectin and milbemycin found in heartworm preventives. So, by using most monthly heartworm preventives, you can also treat for intestinal parasites.

Side Effects Of Deworming Puppies

For the most part, the major classes of anti-parasite drugs (avermectins/benzimadizoles) have a very high margin of safety, meaning that giving too much will rarely cause problems. That being said, always follow your veterinarian’s recommendations for deworming.

Puppies with a large number of parasites (high worm burden) may become ill after treatment. Imagine all of the parasites in the intestines all dying at once, the lining of the intestines become inflamed, causing diarrhea, vomiting and lack of appetite. This is usually a self-limiting problem, and puppies are back to normal within a day or so.

Use of heartworm preventive in higher doses (ivermectin) is very effective against most parasites; however, some breeds cannot tolerate the higher dose. This relates to a mutation in a gene called MDR-1, which codes for proteins that protect the brain (blood-brain barrier). When dogs with MDR-1 mutation get drugs like ivermectin, opiates (morphine-like painkillers) and chemotherapy, they can have serious problems like lapsing into a coma, tremors and death.

Using many of the same drugs for treating parasitic infections will also prevent them. Current recommendations from the CDC and the American Association of Veterinary Parasitologists are to provide deworming medications against roundworms and hookworms at 2 weeks of age, repeating the dewormer every 2 weeks until the pups are 2 months old. Ideally, treat monthly from 2 months to 6 months of age to eliminate different developing stages of the intestinal parasites. Puppies should be dewormed using the above protocol despite fecal exam results.

Puppies may have prepatent infections with minimal to no parasite eggs being shed in their feces.

Pregnant dogs should also be treated to try to prevent transplacental infection to the fetal pups and to prevent transmission through nursing. Your veterinarian will provide a plan for you, because there are a few regimens available. Housing conditions and location are important factors related to parasitic infection. Puppies housed together, with frequent exposure to new dogs and puppies, are more likely to become infected. Unclean conditions, exposure to other animals’ feces, and transmission from other creatures — like fleas, mosquitoes and cockroaches — increase the chance of infection, too.

As with any medical product, there are persons who search for more “natural” ingredients. The problem is that there is little scientific data proving or disproving their effectiveness. Many products have multiple ingredients like sage leaf, fennel seed and papaya leaf. Although individual ingredients can have some degree of anti-parasite activity, the exact dose and combination needed to kill and prevent parasites is largely unknown to the scientific community.

Some naturalistic and holistic health care providers recommend products like diatomaceous earth and garlic to prevent parasites from infecting the GI tract. I could find little peer-reviewed, scientific information on whether that combination truly is effective in puppies. However, there was one paper in the journal Veterinary Parasitology that stated garlic and papaya do not control parasites in goats and lambs.

In my opinion, because the more modern dewormers (fenbendazole, praziquantel, pyrantel) are so safe, proven and relatively inexpensive, there is no need to experiment with herbs and plants on your puppy to treat his or her worms.

Not only do many of these parasites cause illness in puppies, but some can infect people and other species like cats. Contagious agents that infect multiple species and spread from animals to humans are called “zoonotic.” Hookworms and roundworms can invade broken skin, causing “larva migrans,” which are parasites that migrate through an unsuitable host. Parasites need their hosts to not only get food, but also to complete their life cycle and reproduce.

When puppy parasites like hookworms, roundworms and Toxoplasma infect people, those parasites cannot complete their life cycle. However, they will cause problems! For example, say you are playing catch in the dog park and bend down to tie your shoelace. Then you wipe your brow, unsuspectingly infecting your eye with a dog roundworm. Well, that worm can cause ocular larva migrans. It will actually grow and move around inside your eye, and could cause blindness. Visceral migrans occurs when roundworms migrate through the inside of the abdomen, causing damage to internal organs. Canine roundworms are the leading cause of visceral and ocular larva migrans. Hookworms cause cutaneous larva migrans; they penetrate the skin and live under the surface, creating red, irritated marks. I tell my kids that they are never to run around a sandbox or playground without their shoes on because stray dogs and cats frequent those areas to find food from trash bins. It’s likely that they’ll also urinate and defecate in those same areas, infecting the ground with parasites.

If you have children, then you’ve probably heard about toxoplasmosis, which is caused by Toxoplasma gondii, a very common parasite found in cats. Toxoplasmosis can cause birth defects and death of the fetus, in dogs and in humans. This protozoan needs a feline host and most cats never become ill from it. They shed Toxoplasma oocysts in their feces. This parasite is not a major problem for puppies.

Cryptosporidium is a major problem in cows and other ruminants. Dogs are rarely affected, but puppies and dogs with compromised immune systems can get sick, typically with vomiting and diarrhea. Luckily the strain that infects cows and people rarely is found in puppies. That strain led to a major outbreak of illness in Milwaukee back in 1993. It was the largest waterborne outbreak of disease in U.S. history!

In The Know About Parasites In Puppies

I hope that you now have plenty of information about parasites affecting puppies. Remember, all puppies should be treated from 2 weeks of age to 8 weeks of age, minimum. Products like fenbendazole are very safe and effective. Many parasites that your puppy may have can infect you and your family, like roundworms and hookworms. Please speak to your family veterinarian about parasite control and stay away from “Dr. Google,” where you’ll find thousands of testimonials on how a homemade brew of herbs and such cured a puppy’s whipworm infection.