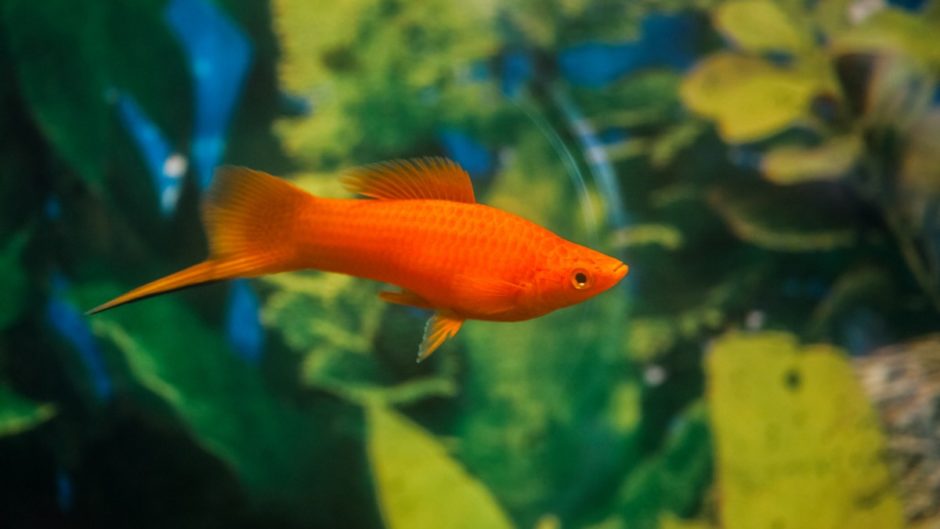 Swordtails and platies are quite rightly among the most popular aquarium fish in the world. No community aquarium is complete without one or the other, or both. Most aquarists believe that they have kept a true swordtail (Xiphophorus hellerii); platy, southern platyfish or moonfish (X. maculatus); or sunset, variegated or variatus platy (X. variatus). But most aquarists have actually kept hybrids between these species — not “pure” swordtails and platies.

Take a close look at any platies or swordtails you may have in your tanks or those that you see in aquatic shops. Some platies appear more elongated than they should be. Indeed, some may even look a little like swordless swordtails. Conversely, some swordtails may look somewhat shorter than they should.

Faced with this situation, it is easy to think that these slight or more apparent departures from the original body shapes are down to selective breeding in captivity, and this is true — but only to a point. For example, every batch of newborn “pure” platies or swordtails will exhibit some variation in body shape. If we select, say, only the most elongated platies from these batches and breed from them, subsequently selecting just the most elongated offspring — and so on — we can eventually end up with true-breeding elongated platies. The same (but in the opposite direction) applies to swordtails. This type of intense artificial selection (as opposed to natural selection) carried out in a protected aquarium environment accelerates the pace of evolution far beyond its natural rate and often goes in directions other than those that would occur in nature.

However, even selective breeding can only achieve so much. Another approach is required if greater variety or more rapid development is sought or desired. In these cases, the basic raw materials are provided by nature itself because swordtails and platies are very closely related to each other. They belong to the Xiphophorus genus, and because of their “biological proximity,” they can easily interbreed and produce viable hybrids in the process.

Such a state of affairs lends itself perfectly to commercial development, particularly when the original species are highly variable. The inevitable consequence is that swordtails and platies are now available in a mind-boggling array of fin and color configurations, making them top sellers, alongside other favorites like guppies, mollies, angels, neons and cardinals.

The inherent (generic) variability of both platies and swordtails is, of course, good news for those dealers and aquarists who are always on the lookout for something novel. It’s also good for the aquatic trade and the hobby because the presence of colorful, spectacular, hardy fish in dealers’ tanks is one of the best ways of stimulating interest in aquariumkeeping.

Hybridization has been at the heart of platy and swordtail culture for nearly 100 years. The hybrids created in the early and mid-1900s were fundamental in determining the nature of the fish we see today. A similar situation applies to the sunset or variatus platy. Hybridizations are reported between it and the swordtail and southern platy, and also with other species, including the Monterrey platy (X. couchianus) and swordtail platy (X. xiphidium). (See the “Swordtail Hybrids” sidebar for specific swordtail hybrids.)

With so many hybrids in the hobby, how can we tell what is a platy and what is a swordtail? Biologically, platies and swordtails both belong to the genus Xiphophorus of the subfamily Poeciliinae of the family Poeciliidae (the same family that includes other popular aquarium fish like the guppies and mollies).

Within the Xiphophorus genus, there are 26 separate species, more or less. I say “more or less” because there’s always some debate going on regarding the validity of certain nominal species. There is, for instance, a beautiful fish found in Rio Soto La Marina in Tamaulipas, Mexico, known as the speckled platy or hybrid swordplaty. It is usually reported as a naturally occurring hybrid between X. variatus and X. xiphidium (X. ‘Kosszanderi’), while FishBase (fishbase.org, a comprehensive online fish database) lists it as a valid species (i.e., X. kosszanderi without the apostrophes). Xiphophorus ‘Kosszanderi’ is shaped overall like an X. maculatus platy, but males carry a distinct (though short) sword. The same goes for the spiketail or swordtail platy (X. xiphidium) from the same river system and for Anderson’s platy (X. andersi).

Conversely, there are swordtail species that don’t bear a sword or have a very short one. In some cases, the sword is even shorter than that possessed by some platies. These include:

In summary, a little more than 42 percent of the species listed as swordtails or platies don’t quite fit the picture of what either should be. In other words, we can’t use the possession or lack of a sword as a distinguishing characteristic between the two, despite the fact that the best-known “pure” swordtail species (X. hellerii) does have a beautiful sword, and the two best-known “pure” platy species (X. maculatus and X. variatus) do not have swords.

Furthermore, not even overall body shape is a good, infallible criterion, with some species being referred to as both swordtails and platies. For an example of such confusion, search FishBase for the southern platy (X. maculatus). The photograph is undoubtedly of a platylike fish, but it doesn’t look like a typical X. maculatus at all. If anything, it looks like a red X. variatus or a hybrid between the two species.

Many people feel the need to know exactly what a platy or a swordtail is, and this comes down to people wanting to fit naturally varying phenomena into neatly ordered boxes. This, in fact, is one of the reasons why members of specialist livebearer societies tend to dispense with common names altogether. By sticking to the scientific names, there’s little risk of confusion. And none of these specialist fishkeepers mind whether a particular fish is a swordtail or a platy. As long as we know that we are talking about X. gordoni or X. mayae or X. meyeri or whatever, we’re OK.

In the midst of all the ambiguity and confusion, it is easy to forget that the spectacular platy and swordtail mutants we find in the hobby are descended from three species. All three are abundant in the wild, though some individual populations may be under pressure. Here, therefore, are some details regarding the “true” or “pure” swordtail (X. hellerii), and the two “true” or “pure” platies: “the” platy (X. maculatus), and the sunset or variatus platy (X. variatus).

Females are generally larger than males, some being capable of reaching about 6.3 inches in spacious aquaria. Males (excluding the sword) can grow to about 5.5 inches.

Slightly alkaline, medium-hard water is best, but a range of water conditions will be tolerated, as long as they are neither too soft, nor too acidic. Suitable temperatures lie between 71.5 to 82 degrees Fahrenheit. Diet: Swordtails will accept a wide range of foods, which should include both animal-based and plant-based components.

Not unlike the guppy, swordtails have received a great deal of attention from hobbyists, commercial breeders and scientists since they were first introduced into the hobby in 1909. The result, again as in guppies, has been a proliferation of color and fin types, some of which would stand little or no chance of survival in the wild. The swordtail hybridizes easily with its close relatives, the “normal” platy or moonfish (X. maculatus), as well as the sunset, variegated or variatus platy (X. variatus). This has been done so often and in so many combinations that many of today’s swordtails are not pure X. hellerii. It is probably true to say that nowadays, pure X. hellerii swordtails only occur in the wild and in the tanks of specialist commercial breeders and aquarists. Furthermore, even pure swordtails themselves are difficult to describe because there are several isolated but distinctive populations of the species, some even containing spotted or red individuals. The nearest the aquarium trade and hobby come to true wild-type swords are the short-finned varieties from which many others have been developed. Hi-fin, lyretail, reds, wagtails, bloodfins, tuxedos, marigold, albinos, pineapple, red-eye reds and numerous others are regularly available and make colorful and generally hardy additions to the tropical aquarium. Male swordtails are often aggressive toward each other, but this can be minimized by keeping multiple specimens in the same tank.

From Vera Cruz in Mexico to Belize and Guatemala

This species has been introduced into the following countries: Saudi Arabia, Indonesia, Jamaica, Japan, Madagascar, Mauritius, Nigeria, Palau, Reunion, India, Colombia, Sri Lanka, Brazil, Bahamas, Australia, Singapore, United States (including Hawaii and the commonwealth of Puerto Rico) and Canada. Established populations exist in a number of these, including the United States.

Cultivated forms are generally larger than wild-caught specimens, with females measuring about 2.4 inches and males 1.6 inches, though both can grow a little larger, depending on genetic makeup and aquarium conditions.

Natural or slightly alkaline water conditions at 64.5 to 77 degrees are preferred, but some deviation from this will be tolerated. Diet: Platies will accept a wide range of fish food, which should include a vegetable component.

The swordtail (X. hellerii) and the sunset or variatus platy (X. variatus) have led to numerous artificially produced varieties of the “common” platy. This occurs because of the inherent genetic variability that X. maculatus exhibits and the ease with which it hybridizes with its near relatives. Xiphophorus maculatus is easily distinguished from X. variatus, despite any additions of fancy finnage or colors that may have occurred. Xiphophorus maculatus has a rather stumpy body, while X. variatus has a more swordtail-shaped body (minus the sword). In addition, X. variatus usually has a series of vertical bars on the sides of the body. These characteristics apply only to offspring of pure X. maculatus and X. variatus parentage. Hybrids exhibit intermediate characteristics, and distinguishing criteria become blurred.

This species has been introduced into fewer countries than its two  relatives: Colombia, Costa Rica, Hong Kong, Puerto Rico, Singapore and United States (including Hawaii), with established populations in a number of these, including the United States.

As in X. maculatus, aquarium varieties are usually larger than those occurring in the wild: Females grow to 2.8 inches and males to 2.2 inches. Both sexes can grow a little larger than this. Water preferences: Neutral to slightly alkaline water at about 59 to 77 degrees is preferred, but a little deviation from this can be tolerated.

These fish accept a wide range of food. Provide a vegetable component on a regular basis.

Despite its name, Xiphophorus variatus is not as varied a species as X. maculatus, the “common” platy. Several natural populations do exist, the most attractive probably being that from the Rio Axtla, which is closest in appearance to the more “basic” of the cultivated varieties.

Breeders have produced large, high-finned and colorful sunset platy varieties. These varieties are so common nowadays that there are virtually no basic wild forms left in the hobby.

Even if you are not sure if you have platies or swordtails in your fish aquarium, it really doesn’t matter. These fish are hardy and beautiful aquarium residents. Due to the genetic variability of these great aquarium fish, breeders are able to create a seemingly infinite amount of varieties for fishkeepers. Keep an aquarium-bred strain, or if you are interested in pure strains, join a specialist livebearer society.