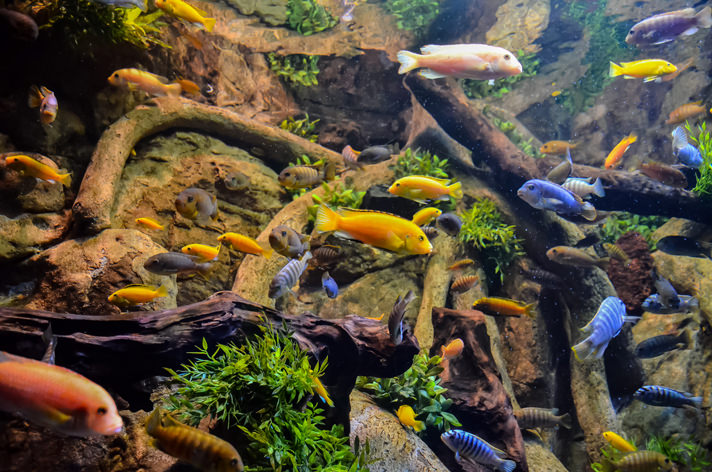 Ammonia is sometimes referred to as one of the  “invisible assassins” in aquaria (along with nitrite). The only acceptable ammonia level in an aquarium is zero. Why do we spend so much time discussing something we want little or nothing to do with? By understanding ammonia, we also come to understand many associated and fundamental facts and processes about our aquaria as a whole. Understanding ammonia both directly and indirectly makes us better aquarists.

Ammonia is a chemical compound made up of nitrogen and hydrogen atoms. Our tropical fish experience it in two different forms: free ammonia NH3 and the ammonium ion NH4+. The makeup of the form we encounter depends on certain environmental factors within our aquariums. The form that ammonia takes also determines its toxicity to our tropical fish and other aquarium inhabitants.

Ammonia can enter our aquaria via three different routes. The least likely source of ammonia introduction in an aquarium is through tap water. To ensure that water is disinfected and safe for us to drink, water companies have treated water with chlorine for years. Chlorine is a relatively unstable gas, and if you live a long way from where it is added to the water, chlorine concentrations could drop below the levels required for disinfection. Consequently, water companies have started to add a more stable, longer-lasting disinfectant called chloramine, which is chlorine bound to ammonium.

By adding tap water treated with chloramine to an aquarium we are inadvertently adding ammonium. Some tap water conditioners release chlorine from our tap water, which can lead to the ammonia being released. You should opt for a tap water conditioner that treats both chlorine and ammonia, especially during water changes when tropical fish are already in place.

Decomposition of organic matter in the aquarium is a second route through which ammonia can enter your aquarium. Proteins are highly abundant in all living organisms, such as aquatic plants, animals and microorganisms. These proteins are made up of soluble building blocks called amino acids (can you spot their association with ammonia yet?). Each amino acid contains an amino group that consists of NH2. So the break down of proteins inevitably leads to the release of ammonia into the water.

In a healthy aquarium, aquatic plants shed leaves, tropical fish constantly shed mucus and when we add fish food (live, frozen or dried), we add a quantity of protein to our aquarium. When these proteins are broken down by a host of opportunistic heterotrophic bacteria in our filters, substrate and water, the amino groups are released and form ammonia. We can bear testimony to this from our own aquarium experiences. If in our earlier days of fish keeping we were to overfeed, or we found dead fish, we would soon notice a change of behavior in our other tropical fish caused by, among other things, a steep rise in ammonia.

The third route also involves the break down of proteins, but this time, through our fishes’ digestion and assimilation of proteins. After our fish consume and digest protein, they then take up amino acids and distribute them to where they are required in their bodies. They are then synthesized into new protein, causing fish to grow. As part of this protein-building process, some amino acids may be altered or may be surplus, leading to their break down in the liver.

Fish either reprocess the resultant amine group from each amino to make new amino acids that can be used to build more fish protein. Otherwise, it is rejected back into the blood. From there, ammonia is excreted from our tropical fish’s bodies via the gills. Alternatively, if our fish are offered too much protein, something similar will happen.

Why Is Ammonia So Bad?

How does feeding too much protein lead to a rise in ammonia? If a high protein growth diet is offered in excess amounts to your fish, they will not be able to utilize all the protein efficiently, so levels of excretion will increase, having a negative effect on water quality. Excess protein in particular is likely to affect water quality. It is all in the balance.

If protein in the diet is in excess of what your tropical fish require, they will not utilize all of the protein in the diet for growth, but either break it down and burn it for energy or excrete high levels undigested. This is highly undesirable, and it is a problem that advanced fish food formulations are designed to try to address.

Tropical fish excrete ammonia because it is toxic. It is colorless and readily dissolves in water. That’s why it is not possible to conclude that any aquarium water is in top condition simply because it is clear and sparkling. Because of ammonia’s toxicity the only way to ensure your tropical fish do not suffer from its effects is to keep it at zero. But what determines the ammonia levels in our aquaria?

The first thing to consider is the actual quantity of ammonia. The amount of ammonia that can accumulate is really a function of the inputs and outputs of ammonia within your closed-aquarium system.

What are our inputs? We’ve already seen how the various different sources of ammonia can affect the overall ammonia levels in an aquarium. But all inputs of ammonia, however extreme, should be judged in relation to their outputs. In an aquarium (besides the regular partial water changes that really dilute more persistent, accumulated pollutants) filtration is the means of removing (or outputting) ammonia.

Even though a biofilter facilitates the removal of ammonia within an aquarium, I prefer to describe it as reprocessing rather than filtration. This is because filtration removes, whereas reprocessing changes the characteristics of something, which in this case is exactly what happens to ammonia. Aerobic bacteria converts ammonia to nitrite (NO2). This is also called the nitrogen cycle. The greater the capacity for such bacteria in a system, supported by all their requirements (oxygen, removal of wastes, etc.), will determine how much ammonia can be reprocessed.

If filtration is limiting, as in an undersized filter, then ammonia will soon accumulate. A classic period for ammonia accumulation is when an aquarium and its filtration system are new and immature. These are the circumstances under which most new aquarists find themselves, and it is usual that this is also when they experience ammonia problems for the first time–hardly a warm welcome to the fish keeping hobby!

It is because of ammonia, its toxicity and the inability of an immature biofilter to reprocess it, that “New Tank Syndrome” can become a fatal reality for many tropical fish. To avoid it, new fish should be added gradually and the water tested frequently to check that the new aquarium and maturing filter are able to cope with the ammonia input from the initial few fish. Only then can additional tropical fish be introduced and so on, over the first few months, until the aquarium is brought up to its full capacity.

Ammonia exists in an aquarium in two forms: free or unionized ammonia (NH3) and ionized ammonia, called ammonium (NH4). Free ammonia is highly toxic compared to ammonium (not that this means you can relax if your ammonia is in the form of ammonium), and the proportion of toxic to less toxic ammonia depends on several factors, the most important being pH and temperature.

Ammonia is a tissue irritant, causing real problems for delicate areas such as exposed gill tissue. The gill tissue responds to this irritation by hemorrhaging, with the delicate filaments thickening and clumping together–a condition called hyperplasia. The vast reduction in surface area caused by the clumping reduces a tropical fish’s ability to absorb oxygen from the water. In addition to their undesirable state of affairs, any oxygen that is absorbed is done so suboptimally, as the presence of ammonia reduces the blood’s carrying capacity.

If that’s not bad enough for our tropical fish, the reduction in the surface area of the gills also reduces a fish’s ability to excrete ammonia from its body, causing the ammonia levels in the fish to increase, damaging every cell in the fish’s body. More than 90 percent of all ammonia excreted by tropical fish is done so by the gills. It’s not surprising therefore that when tropical fish do experience ammonia in an aquarium, they show a pronounced and typical gasping response.

If ammonia strikes in what has previously been a mature and stable aquarium (not a result of New Pond Syndrome), then you should check the following:

Have you (or anyone else) changed the fish food or fed more than usual?

Is the fish tank filter blocked? Is its flow rate reduced? Does the media need cleaning?

Are there any fish missing? Is a dead tropical fish decaying unnoticed behind your aquarium decor?

Have you recently added more tropical fish–perhaps more than your aquarium can handle?

In summary, ammonia is lethal, and we should aim for zero levels at all times. Sublethal levels can also go unnoticed, causing tropical fish stress and making them more susceptible to disease. If an ammonia spike does occur, it is likely to be in either a new aquarium (new tank syndrome) or due to an acute catastrophic event (overfeeding, fish death, etc.). However, rapid intervention and a mature filter will address both the problem and enable your aquarium (and tropical fish) to recover. Fortunately, a filter will reprocess ammonia relatively into nitrite. Unfortunately, nitrite is still lethal to freshwater and saltwater fish and proves to be more persistent and is a more stubborn problem to resolve–but that’s another story!