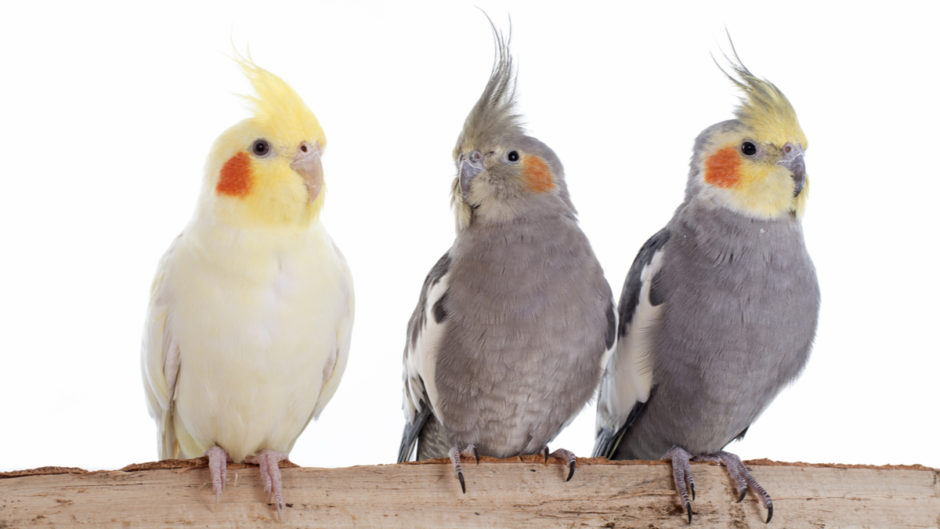 These days, there’s plenty of great parrot advice floating around, and though much of it applies to the cockatiel, any cockatiel owner will tell you that her bird is special. That attitude might seem biased, but it’s true. The cockatiel requires some special considerations that new owners should know in order to best care for these unique birds.

The cockatiel is one of three commonly kept parrots that create an abundance of bird dust. The other dust culprits are the cockatiel’s close cousin, the cockatoo, and the African grey parrot. You might notice a layer of fine, white dust covering pretty much everything near your cockatiel’s cage, especially objects that draw dust with static, like the television. This dust comes from white powder-down feathers that grow close to the bird’s skin. These feathers emerge among the down feathers, and both are used to help insulate the bird. What’s unique about the powder down feathers is that the tips crumble into a fine dust as the bird preens, spreading the powder throughout the feathers and helping to waterproof the bird.

The dust isn’t a problem for most people, but it can create respiratory issues and even aggravate asthma for others. Cockatiels can cause allergic reactions in other pet birds kept in close proximity; macaws seem to be especially affected by dustier bird species.

Bathing your cockatiel frequently helps reduce feather dust, and placing an air filter near your bird’s cage, like the HEPA filter, will polish the air and cut down the possibility of respiratory issues. I have had many cockatiels over the years, and I never so much as sneezed from the dust. And I’m not a compulsive duster.

Most hens have the singular mindset to make more cockatiels, even if there’s no male around. Frequent egg laying is a problem in cockatiels, and though egg laying is biologically innate, many female cockatiels will lay way too many eggs in short succession, causing potential health issues, including egg binding, paralysis, and weakening of the bones.

Just because she’s laying eggs does not mean that your cockatiel needs or wants a mate or to have babies. It means that her body has been sent external signals that it’s time to nest, and she can’t help her instincts. Usually, a cockatiel will come into mating condition when the light gets longer in the spring. An abundance of food and water also prompts a cockatiel to want to set up house. Since you’re not going to restrict your bird’s food and water, restrict the light your hen receives if she persists in laying eggs. Use sun lamps and/or a cage cover to allow no more than 10 hours of sunlight a day until her hormones calm down and she stops nesting.

If your bird is laying and sitting on eggs, allow her to have them for a few days, and then remove them. It’s not necessary to replace the eggs with plastic eggs, as many canary breeders do. This will only prolong her sitting on them. Nesting is very stressful for a female cockatiel without a male. Most pairs take turns sitting on the eggs, so if she’s alone, she might forgo the food and water dish in order to protect her eggs, even if they’ll never hatch.

If you have a pair of cockatiels and your hen is laying an abundance of eggs, remove any perceived nesting areas and you may have to move the male to another room temporarily if egg laying becomes a real problem. Consult your avian veterinarian for more advice on this issue.

3. Cockatiels Can Be Seed Junkies

An all-seed diet greatly increases disease in most parrots and decreases lifespan significantly. But what do we feed a bird whose natural diet is mainly seeds? The cockatiel uses the same natural habitat as the Australian grass parakeets, and the foods it eats are similar, although the cockatiel has also been seen feeding on vegetation and insects. Also, the wild cockatiel’s diet consists of both young and mature seeds of all varieties, even seed crops, much to the chagrin of farmers.

There’s no way to mimic the cockatiel’s wild habitat in the average household. The wild cockatiel eats far more than a pet cockatiel, but it also exercises far more as well. It also doesn’t have a shot at living as long as your cockatiel. So, it’s best to feed your cockatiel according to the research and advice that we use for all parrots; variety is key. Some cockatiel bird food is fine, but supplement it with pellets, cooked diets, nutritious vegetables and fruit. Even though your cockatiel might love seeds, don’t make it the only item in your bird’s dish.

It’s the middle of the night and suddenly you’re woken from a deep sleep by the sound of thrashing and clanging — scary! You know it’s probably not an intruder; it’s your cockatiel having “night frights, also called “night thrashing.” Cockatiels are notorious for this behavior. Something in the darkness frightens the bird; perhaps a noise, lights or shadows; and the bird tries to take off to protect itself and thrashes around its cage in a panic. It’s not unusual for a bird to harm itself this way, usually an injuring an eye, leg or breaking feathers.

To prevent or reduce the frequency of night frights, use a night light in the bird’s room, though some birds do better covered in complete darkness using bird cage covers. You’ll have to evaluate your bird’s individual preferences after the night frights occur. Try to eliminate the trigger for the night frights. Perhaps your pet cat is stalking the birds at night, or headlights shine randomly into the window as cars pass, scaring the bird. If your bird still thrashes at night, consider using night-time bird cages without any perches or bird toys, and line it with towels.

All parrots have a sensitive respiratory system, but the athletic cockatiel is even more sensitive than most. This bird has a very light body for its size, and succumbs to fumes easily. Keep your bird’s air toxin-free, and keep them well away from fumes from non-stick coating, candles, air fresheners and aerosol sprays.

The cockatiel is well suited for outdoor aviary life. This bird is an agile flyer and appreciates being allowed to take advantage of this natural attribute. It also will appreciate being outdoors in good weather, soaking up the sunshine. Sunshine is important for a bird’s overall health. Since it is a fairly docile bird, it does well in a large aviary with other docile birds, such as budgies, some species of grass parakeets and some varieties finches. Do not house cockatiels with lovebirds or larger parrots; the cockatiel is unable to defend itself against these more aggressive birds.

The cockatiel, with its long tail, needs a larger bird cage than a similar-sized bird with a shorter tail; otherwise its tail will rake against the bars and dip into the water cup, making it perpetually ratty.

Cockatiels also need to exercise, or they risk becoming “perch potatoes.” An overweight cockatiel can develop fatty tumors, gout, heart disease and general illness. Better to allow your cockatiel daily exercise than to spend a ton of cash at the vet’s office.

The cockatiel is the only small parrot with a head crest. The crest raises and lowers according to the bird’s mood. As you get to know your bird, you’ll come to understand what each crest position means. When the crest is raised to full height, it usually means that the bird is excited, fearful or curious. A lowered crest, with just the tip of it sticking up, indicated that the bird is content. Subtle differences in crest positions can signal an entirely different mood. For instance, an angry ‘tiel might hold its crest tightly against its head, which is often accompanied with a hunched back.

The cockatiel is also one of the only small parrots that hisses and spits when afraid or behaving aggressively.

Many people get cockatiels because they aren’t “loud.” Well, volume is subjective, and there are plenty of cockatiel owners with neighbors who would argue otherwise. Though the cockatiel a whole lot of bird noise, it’s definitely persistent in its vocalizations. I once had an African grey that learned the cockatiel call in his previous home and performed it constantly at 10 times the volume; the worst of both worlds! Don’t get a cockatiel because you think it will be a quieter parrot. Get one because you like what the bird offers; a fun personality and a docile and quirky nature.