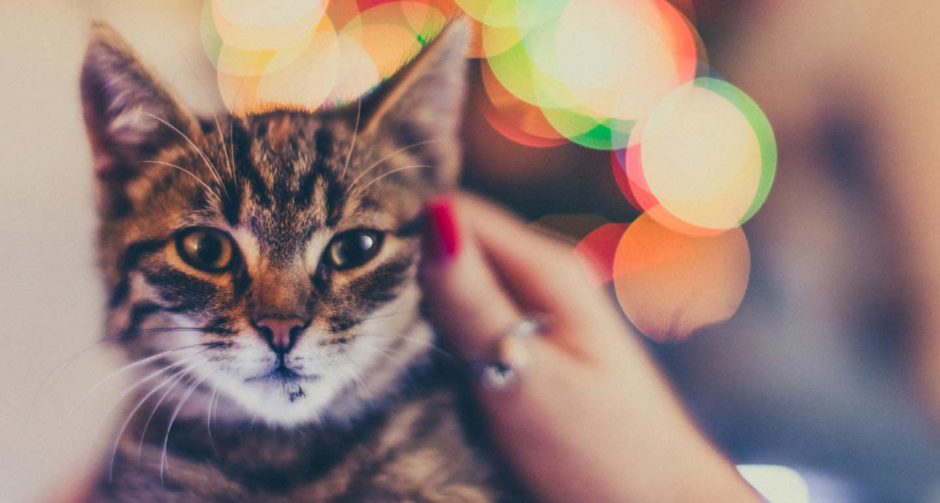 Is there anything cuter than a puppy under the Christmas tree (or Hanukkah bush)? Why sure there is—a dog or cat of any age who comes into your life to brighten up the holiday season! That special pet deserves a memorable name that will remind you of their arrival. And when it comes to Christmas names for pets, you’ve got a wide selection to choose from.

So, get ready to get into the spirit of the season with these Christmas names for pets.

As in Christmas carols, of course!

This ingredient is the star of the holidays, from cookies to gingerbread houses to peppermint bark.

You can’t have a gingerbread house without this spice, which is why it makes a perfect Christmas girl dog or cat name, especially if your pet has red or orange fur.

A name to keep sugar plums dancing in your head all season long.

The Spanish word for cinnamon, another popular holiday spice.

One of Santa’s reindeer (and, because its literal translation means “female fox,” it’s especially appropriate for dog breeds that resemble foxes).

This name can remind you of Christmas Eve, especially if that’s the day your new pet entered your life.

Spanish for “dove,” a symbol of peace.

This popular holiday plant can be dangerous to pets, but that doesn’t mean you can’t use it as a cute Christmas name!

Often paired with Holly, this plant is as good a name as it is a Christmas decoration.

Perfect for the new pet you found in your stocking!

Evoking festive happiness, this name celebrates all the joy your new pet brings to your world.

This name will have you singing “Angels We Have Heard on High” all year long.

Like a candy cane, of course! You can also use the alternate spelling Kane.

A reference to Charles Dickens, author of “A Christmas Carol.”

Kris Kringle is another name for Santa Claus.

One of Santa’s reindeer. For a cute nickname, you can shorten it to Dash.

The red-nosed legend is one of Santa’s most famous reindeer, and his name comes with a cute nickname: Rudy.

This is the word for “happy” in Latin—and who isn’t happy around the holidays?

The word for Christmas in Swedish.

Another name for Christmas, as in, “yuletide greetings.”

The angel who told Mary she was pregnant with Jesus.

Last name of famous crooner Bing Crosby, whose “White Christmas” and other songs after often heard during the holidays.

Santa’s surname is especially appropriate for cats who like to use their own “claus” on toy scratchers.

The antler-sporting dog in “How the Grinch Stole Christmas.”

The famous dog in “A Charlie Brown Christmas.”

The canine star of “The Dog Who Saved Christmas.”

The dog at the center of 2014’s “Shelby: The Dog Who Saved Christmas.”

The dog in “Scoot and Kassie’s Christmas Adventure.”

The dog who stars in “Adventures of Bailey: Christmas Hero”—and also a reference to George Bailey, the main character in “It’s a Wonderful Life.”

The dog in “Hercules Saves Christmas.”

Looking for a dog name from “The Nightmare Before Christmas” ? Well, you’ve found it!

Bring this name with you to your next holiday trivia night—it’s the dog’s name in “National Lampoon’s Christmas Vacation”!

These are the stray dogs recruited to pull Santa’s sleigh in 2004’s “Nine Dog Christmas.”

These dogs starred in the Disney movie, “Santa Buddies.”

The Jack Russell Terrier in 2016’s “A Doggone Christmas.”

A little on the nose? Maybe—but when you name your pooch after the canine star of “A Dog Named Christmas,” you can just shorten it to Chris.

The handsome pup in the get-out-your-tissues film, “Christmas With Tucker.”

These little oranges are in peak season around the holidays.

That’s the sweet pudding dish made at Hanukkah.

Bitter greens that are in season in the winter.

A fruit that’s in season this time of year, sometimes used in Christmas pudding.

Another fruit that comes into its own in the late fall and early winter.

What else would you leave Santa beside that glass of milk?

Though the vegetable is more associated with Halloween, pumpkin pie is still a common holiday-time treat.

Because it’s not Christmas dinner without a side of cranberry sauce.

Perfect for snuggling in front of the fire with a steaming mug.

A top toy for Hanukkah

It’s a city in Germany, but also the name of 3D ornaments made in Germany in the 19th century.

Here’s a Christmas girl dog name that will remind you of holiday bells.

This holiday décor can be dangerous if eaten by pets—so why not add a pet named Tinsel to your home instead?

From holly berries to cranberries, these juicy fruits are a sure signal of the season.

Maybe this name will inspire angelic behavior out of your new pet? Hey, it’s worth a try.

Reminiscent of the festive décor strung around many holiday homes at Christmastime.

Named for the source of light that led the Wise Men and for the sparkly Christmas tree topper.

As important characters in the story of Christmas, shepherds can serve as name inspiration for all pets (not just, say, the German variety).

One of three wise men (and no, not the ghost).

The donkey in the early ‘60s Christmas song, “Dominick the Donkey.”

The Snowman in the “Frosty the Snowman” song.

The good king in the Christmas song made famous by Bing Crosby.

A character in “The Nutcracker,” the ballet that’s performed every holiday season.

The first name of the Tex-Mex Santa Claus (Pancho Claus).

Will Ferrell’s character in the recent Christmas classic, “Elf.”

The character at the center of the “12 Dogs of Christmas.”

The angel in “It’s a Wonderful Life.”

From the Christmas carol, “O Come, O Come Emmanuel.” (You can always shorten it to Manny.)

These are names of the Bumpus’ hounds in Jean Shepherd’s book “Wanda Hickey’s Night of Golden Memories and Other Disasters,” which was later made into the movie “A Christmas Story” in 1983 (and still shown today). Even though the Bumpus family had 785 dogs, the hillbilly family gave them the same three names!

The Spanish word for “white.”

The French word for “white.”

The Spanish word for “snow.”

The Spanish word for “cold.”

As in North Pole, where it’s always chilly. (Warning: Some people may assume you were inspired by Kanye.)

The capital of Norway, and the site of the Winter Olympics in 1952.

After St. Moritz, the city in Switzerland where the Winter Olympics were held (twice) before World War II.

The city in Japan where the Winter Olympics were held in 1972.

The word for “winter” in Czech.

The word for “snow” in Finnish.

The word for “white” in Italian.

The state that’s home to one of the most famous dog-sledding races, the Iditarod, a 938-mile trek from Anchorage to Nome that takes place every year.

Drinking hot cocoa may just be the greatest way to warm up on a cold day or night.

This name would fit perfectly with an all-white pet.

These winter storms may not be fun to sit through, but they do make for a cute and unique pet name!

Perfect for a pup who enjoys wearing a Christmas sweater.

This name inspired by the masses of ice near the north and south poles has an outdoorsy vibe.

A name that can directly reference the Alps, a European mountain range, or just about any elevated mountain areas.

The Colorado town famous for its ski slopes.

Once you pick your furry family member’s name, you’ll want to broadcast it everywhere—starting with your pet’s apparel itself. The GoTags Personalized Stainless Steel ID Tag lets pet parents engrave their pet’s name, address and phone number right on the tag, to help reunite them with their pet in case they get lost. Parents can also use an embroidered collar, like the Personalized Reflective Nylon Dog Collar from GoTags, or a personalized leash like the GoTags Personalized Nylon Dog Leash, to announce their holiday-themed name to the world.

Of course, this isn’t an exhaustive list of Christmas names for pets, but take it as a starting point for finding that perfect Christmas cat name or memorable moniker for your new pup. And happy holidays!