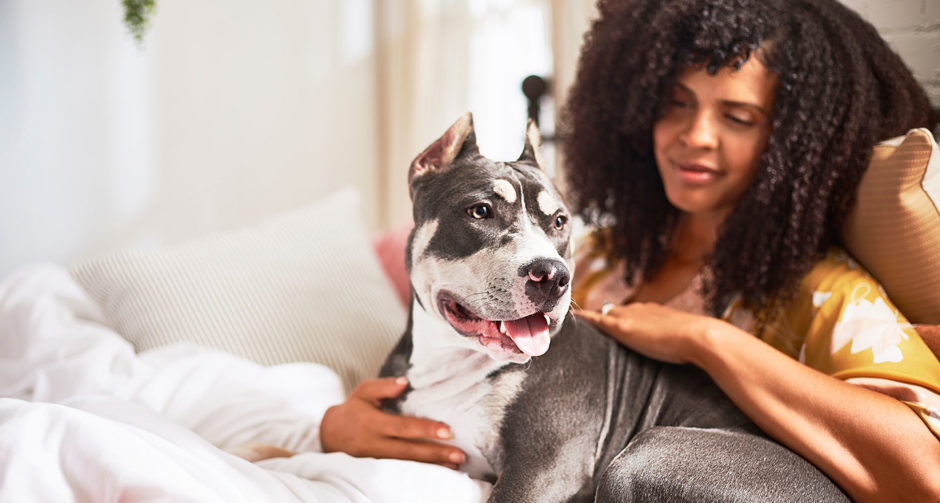 Before Shakira Parks and her husband welcomed a new puppy into their family, they did everything they could to prepare. They read up on the best puppy products and created a little nursery of sorts for their new bundle of joy. In fact, before they even decided to get a new puppy, they did a lot of research to make sure it would be a good fit for their 9-year-old American Staffordshire Terrier, Vegas. And just like parents of human babies, no matter how much they prepared, there were some things they couldn’t anticipate.

“She was a real handful,” says Parks, who is the studio operations manager at Chewy. “I was like, ‘Oh my god, what did I sign up for?’”

Boston Beanz, named after Parks’ hometown of Boston, Massachusetts, was 7 weeks old and full of that rambunctious puppy energy.

“She was an athlete the moment we got her,” Parks says. “Jumping off furniture. Running up stairs.”

Vegas, who was used to being an only child, wasn’t sure what she had signed up for, either, and let her feelings known by giving her little sister, also an Am Staff, the cold shoulder. Fortunately, the freeze out didn’t last long. After a few weeks, they had completely bonded to each other. Now, Vegas doesn’t even want to leave the house without Beanz.

And Beanz loves her big sis. “When her big sister is around, she acts like she can conquer the world,” Parks says.

Those first few weeks were crucial to setting Beanz up for success as a full-fledged and thriving member of the family. To make the transition into her new home easier, Parks made sure she stocked up on everything Beanz could need and then some. If you’re looking to add a new fur baby into your household, here are Parks’ top puppy product picks. 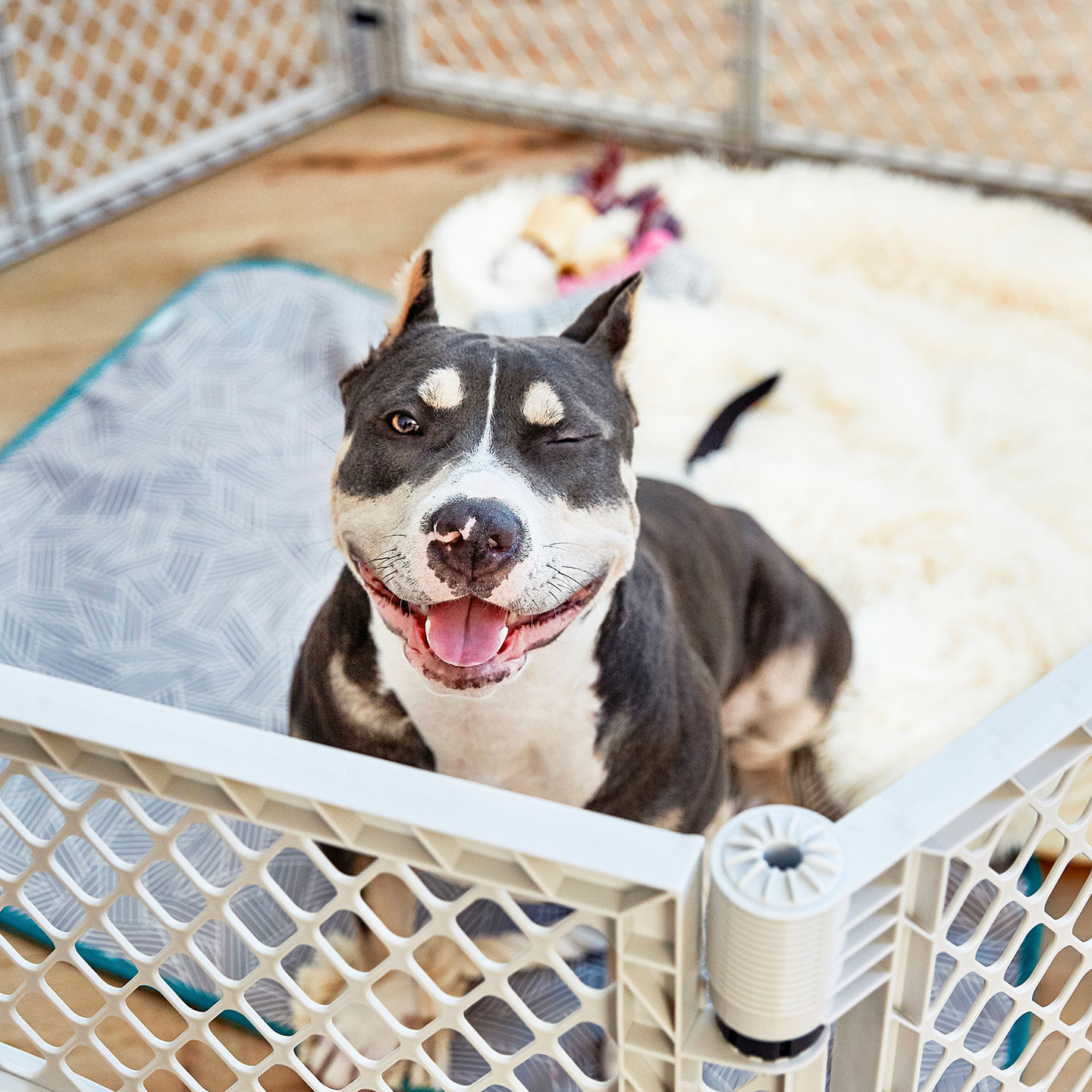 The first thing Parks did when preparing for Beanz’s arrival was to set up a “nursery” space in the living room. The idea, she says, was to give Beanz her own space while ensuring Vegas could have a break from puppyhood. Parks used MyPet’s Petyard Passage with the two-panel extension to create a 34-square-foot puppy pen. She definitely recommends getting the extension to create a large enough space to put all your basic puppy supplies and give your new charge room to roam. 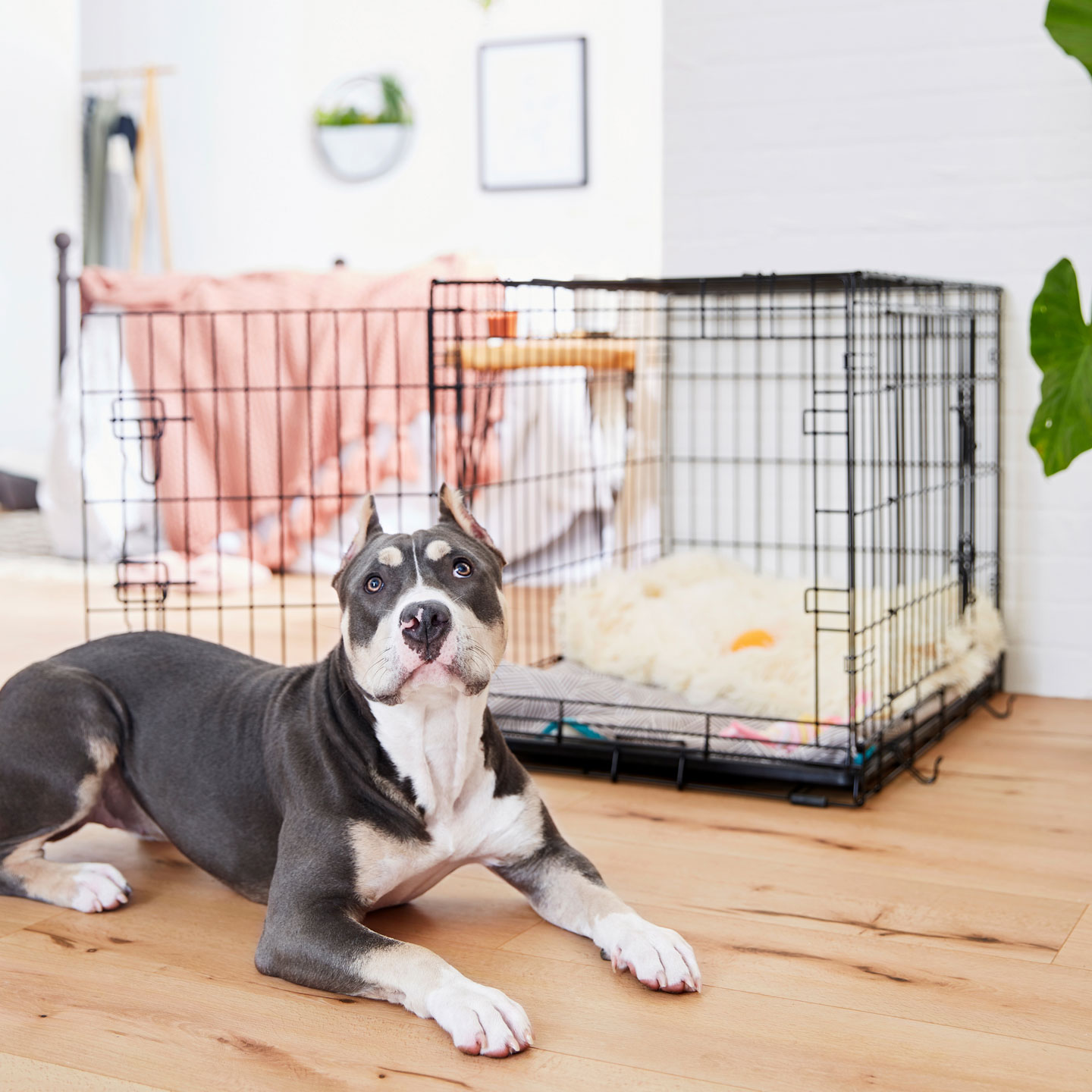 Inside the puppy pen, Parks placed the Frisco Heavy Duty Double Door Dog Crate. What she loves most about this particular crate is its two doors, one on the end and one on the side. Usually crates only have one door on the end. Having that side door allowed Parks to put the crate flat up against the wall, instead of having it jut out into the room.

“It gives you a lot more flexibility [on where you can place it],” Parks says.

Beanz loves her crate and, since Parks started with the larger 42-inch size, she’s been able to grow into it.

“She sleeps in it and goes and hangs out [in it],” she says. “We leave the door open and I’ll randomly find her taking naps in there.” 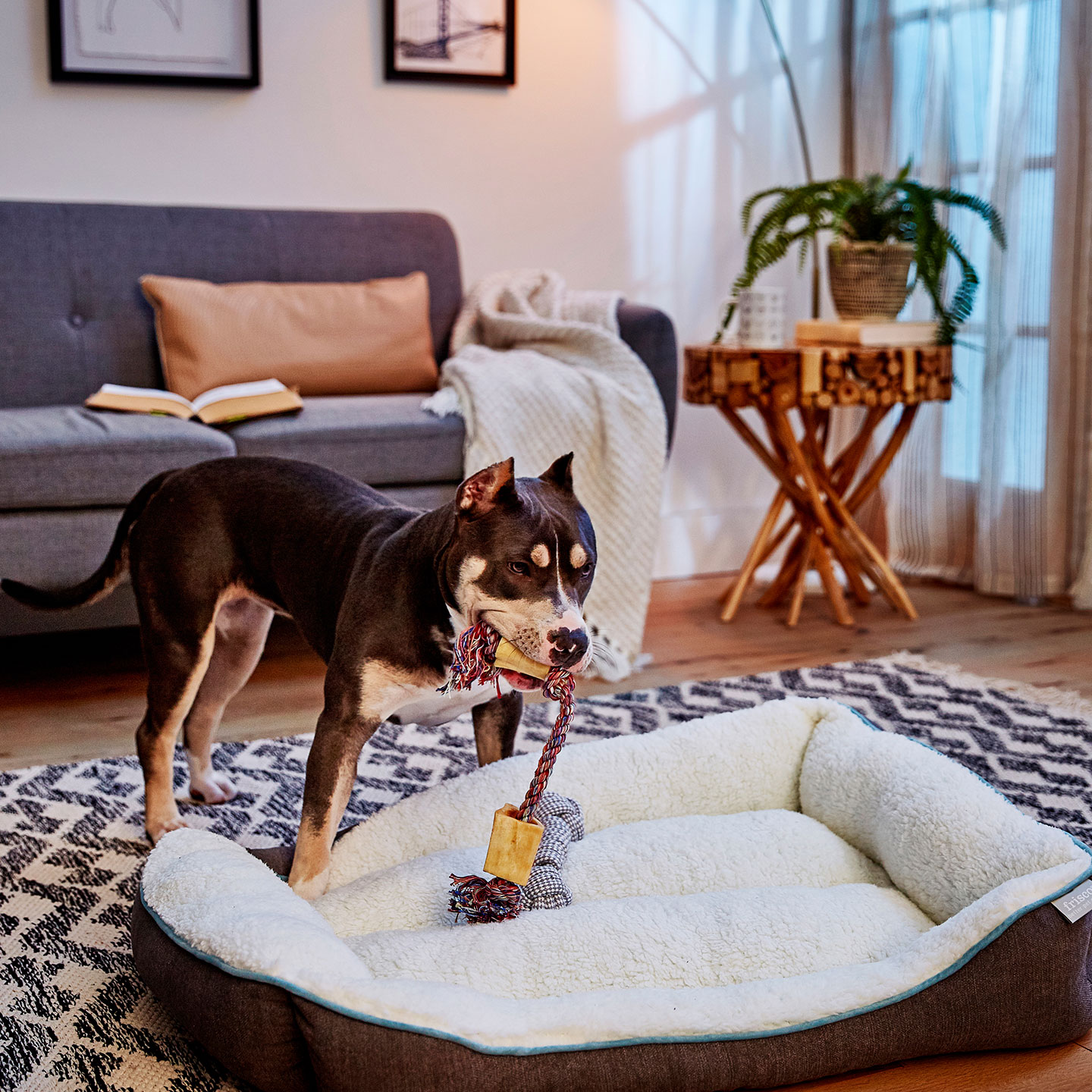 Inside the crate, Parks put the Frisco Sherpa Bolster Rectangular Dog Bed. She likes that it's machine-washable and sturdy enough to stand up to the rough-and-tumble Beanz.

“She peed on it immediately—as soon as I gave it to her,” Parks says. “So, thumbs up.”

Although Beanz, who’s about 45 pounds these days, has pretty much grown out of her puppy bed, she can still use it if she curls up in it.

“It’s lasted a lot longer than I thought,” Parks says. 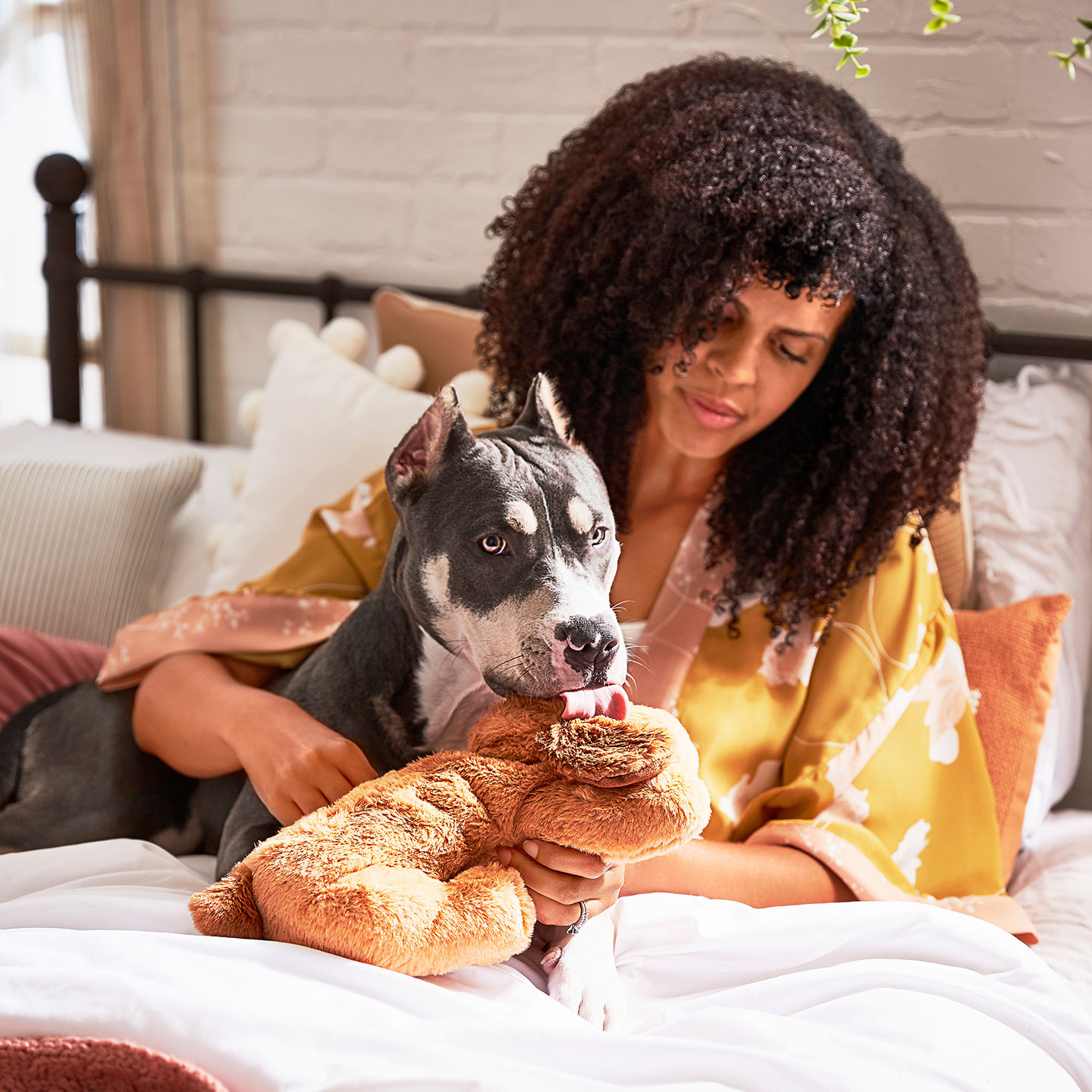 Smart Pet Love’s New Puppy Starter Kit comes with a teething ring, a blanket and a “Snuggle Puppy,” a plush dog that has a simulated heartbeat and a pocket for placing heating pads.

“That was totally worth it,” Parks says.

Parks brought it in the car when they drove to pick Beanz up for the first time. When they came home, she put the puppy and the blanket in Beanz’s crate. Beanz loved to cuddle with puppy and Parks says it helped Beanz sleep longer.

“When she’s asleep in the crate, she doesn’t feel like she’s alone,” Parks says.

She thought it was such a great investment that she even bought one for her sister who got a new puppy two weeks after she brought home Beanz.

Even though Beanz is 6 months old now, she still has a special place in her heart for her Snuggle Puppy.

“She’s killed everything else, but she will not kill that toy,” Parks says. 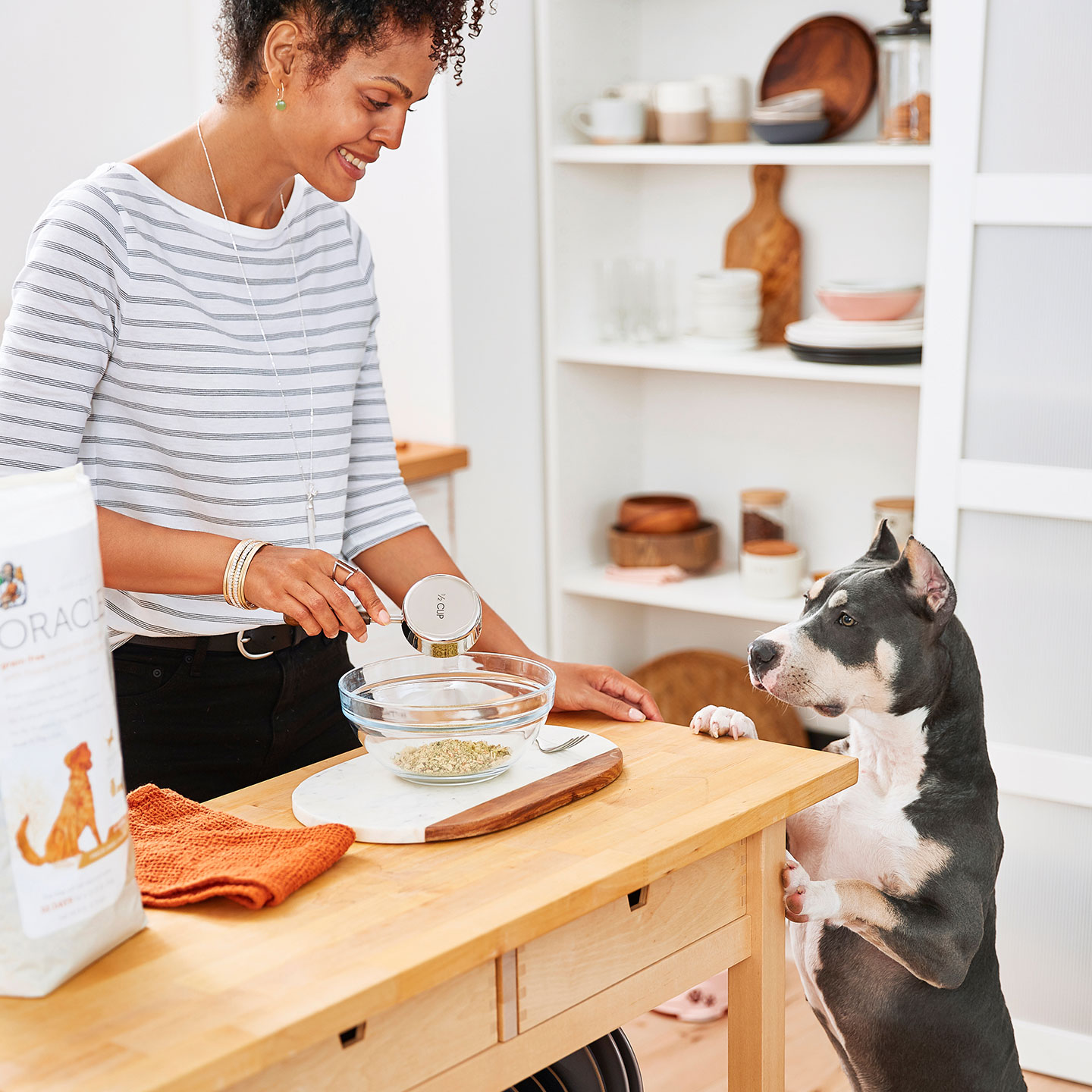 When it came to choosing which food to give Beanz, Parks opted for Dr. Harvey’s Oracle Grain-Free Chicken Formula Freeze-Dried Dog Food. She liked that it was a raw-based diet that’s easy to prepare. (Learn more about raw diets for dogs.) 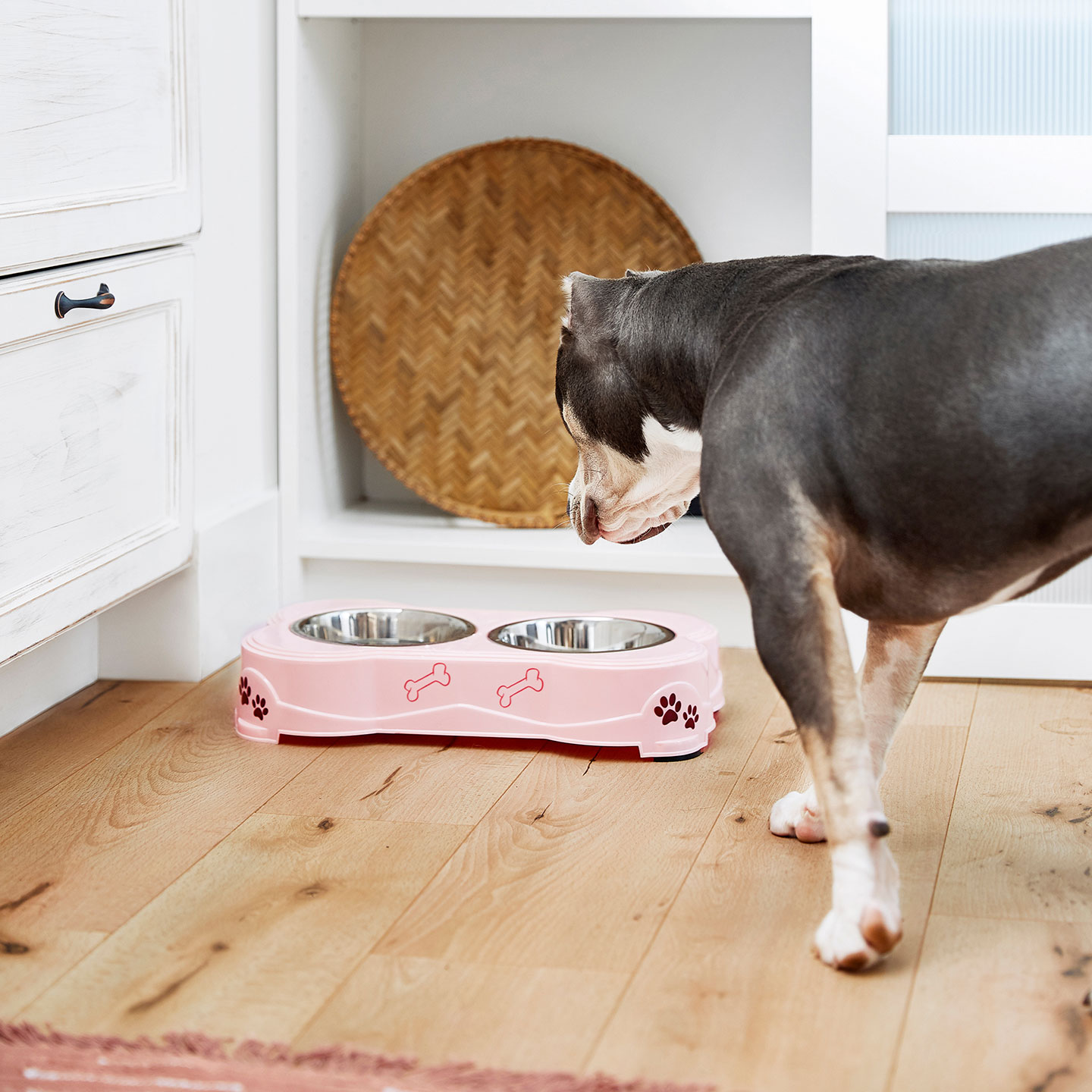 For food and water dishes, Parks wanted something that had a stylish design and would fit with her own home décor. After all, Beanz’s nursery was in the middle of the living room for all to see.

She chose Loving Pets’ Dolce Double Diner food and water bowl because she liked the color (pink) and the print (dog bones and pawprints). Plus, it was the right size for a small puppy.

“It matched her blanket and all that stuff,” Parks says. “I wanted things to look cute together for her little space. I wanted it to be color coordinated.” 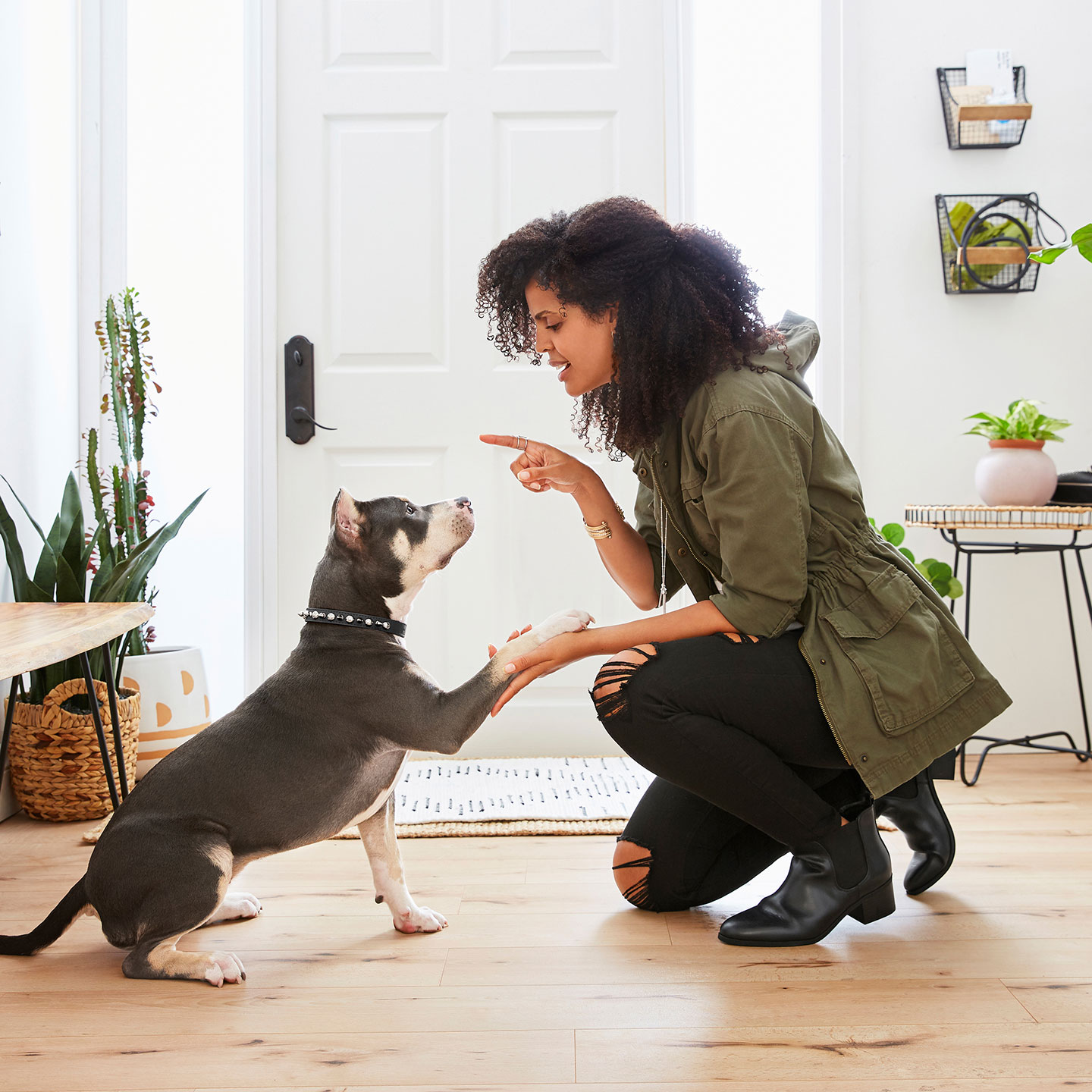 “I got the little sister the little miniature version of that,” she says. “I wanted them to look cute together out walking.” 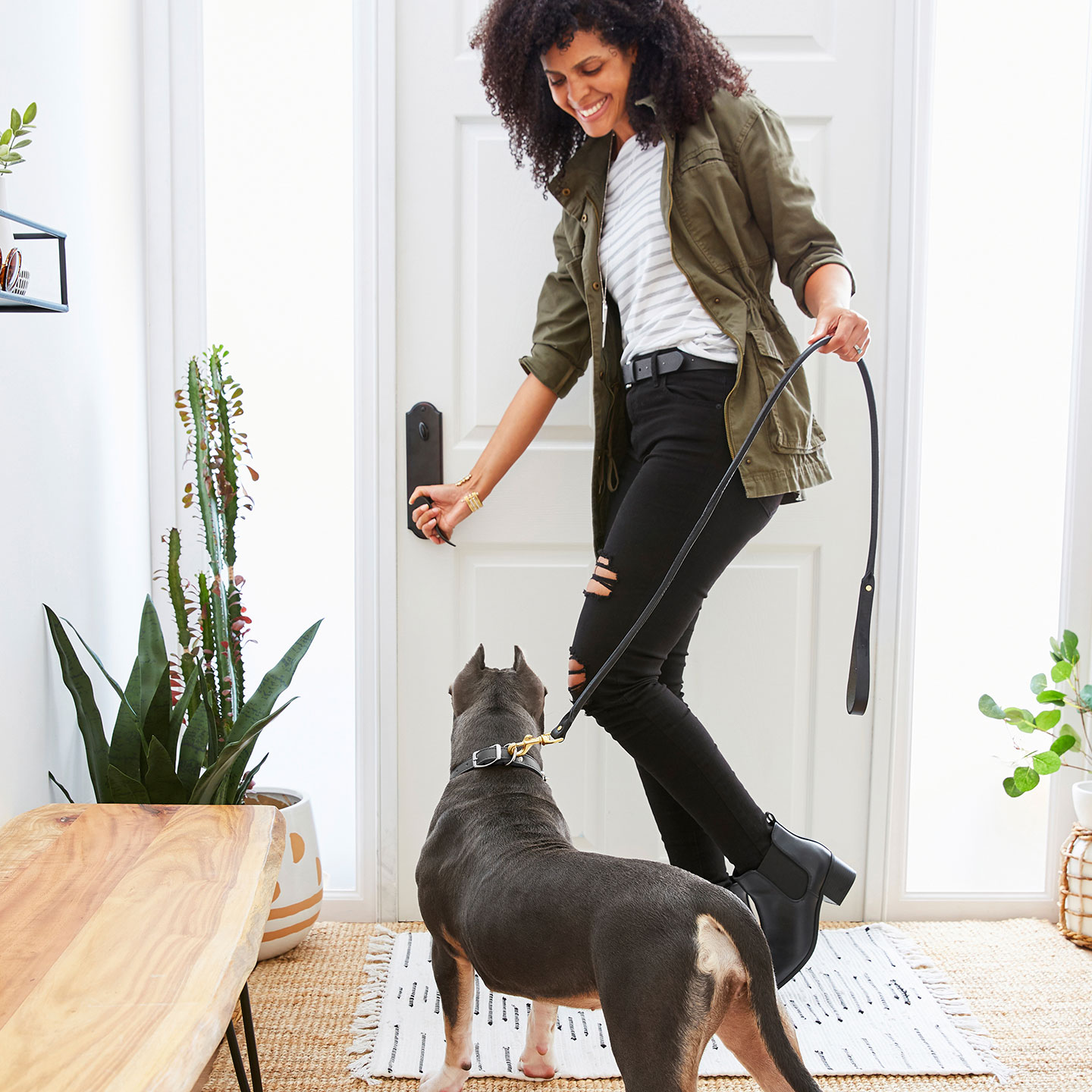 Another new dog essential is a dog leash. To go along with the collar, Parks got Beanz the OmniPet Round Latigo Leather Dog Leash. The leather is not only stylish but durable and has a soft grip, she notes. She started with the 4-foot leash, but, being a large dog breed, Beanz quickly outgrew that. “It was a little short,” Parks recalls. “I had to stand in the grass when we went out for potty walks.” They’ve since moved to a standard 6-foot leather lead. 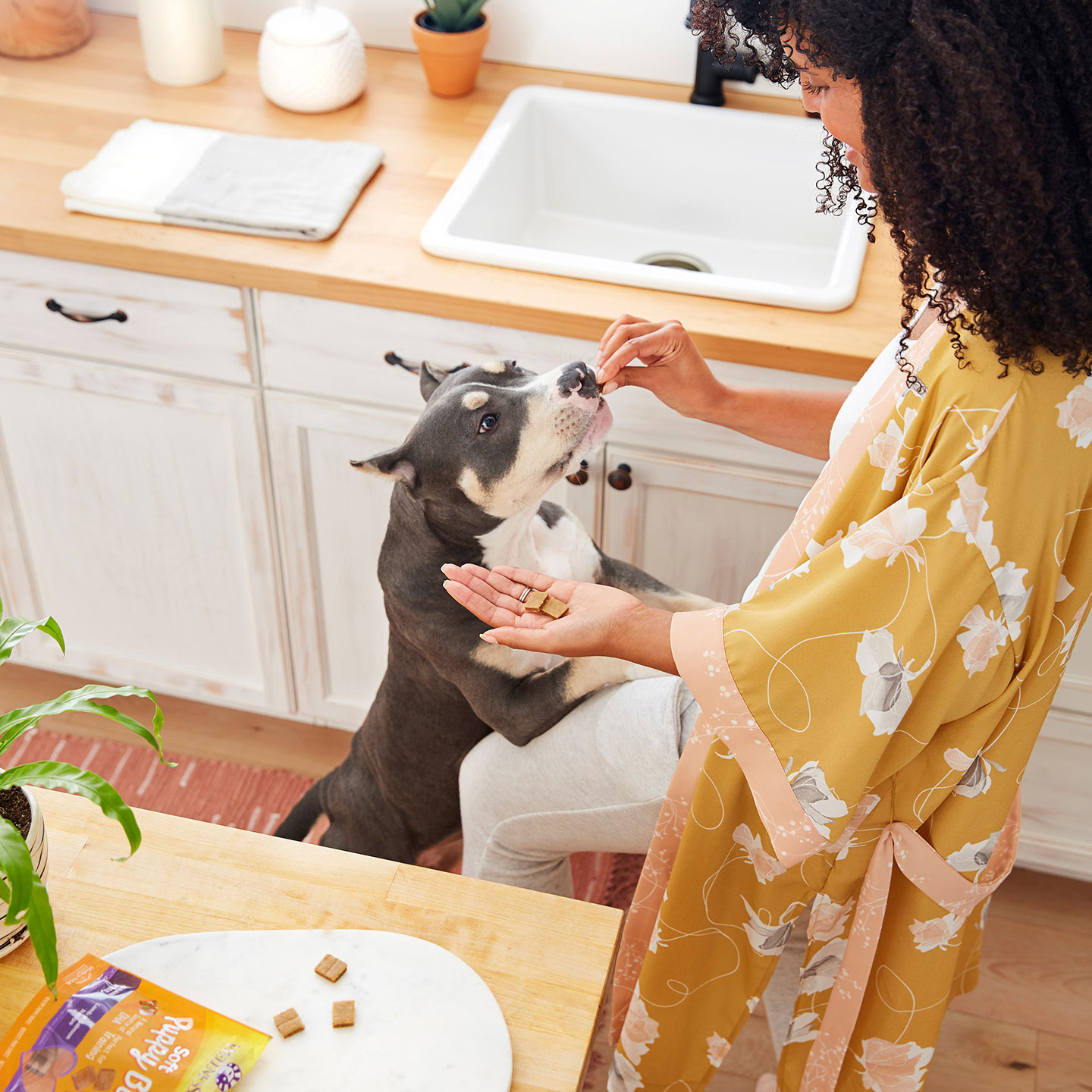 New puppies need training—not only to learn the rules of the house, but also basic commands, like sit and stay. The small size of Wellness’ Soft Puppy Bites grain-free treats make them a perfect reward during training sessions. And Beanz needed lot of training at first.

“Walking on a leash was a huge one. That one was really hard,” Parks says. “All she wanted to do was pull. She was a born sled dog.”

Parks also likes that the treats are soft and can easily be broken up into even smaller pieces, if needed. 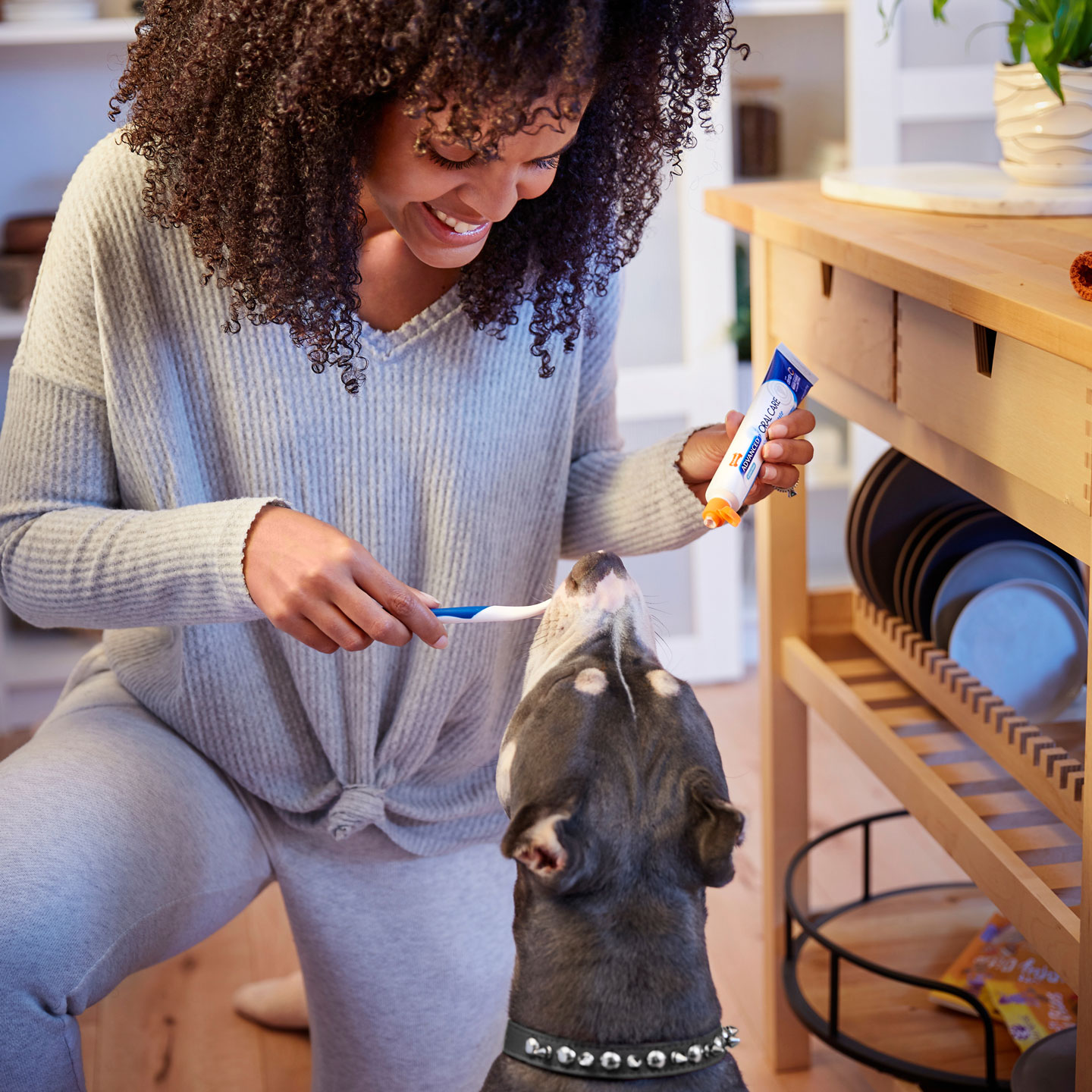 Parks also has a great pro tip for getting those teeth brushings in, even with disapproving puppies. She keeps the toothbrush and toothpaste on the side of the couch, ready to go. That way, when Beanz starts to fall asleep while on her mama’s lap, and she’s more amenable, Parks can get a quick tooth-brushing sesh in with minimal objections.

It’s safe to say puppyhood is no walk in the (dog) park, but it comes with so many magical moments that make up for the challenges.

“My favorite part of the day is when Beanz crawls into my arms and nuzzles her head into the nook of my neck and falls asleep,” Parks says. “It makes all the crazy totally worth it.”

What to Expect the First Year With Your New Puppy

By: Stephanie Brown, Pet Central Senior Editor
Stephanie Brown is the Senior Editor of the Chewy blog, Pet Central. From a very young age she’s loved animals and has had the honor of sharing her life with many pets, from cats and dogs to parrots and guinea pigs. She is an award-winning journalist who has spent most of her career creating content about what she loves most in the world—pets. Her favorite pastime is thinking up new and ridiculous names to call her rescue cat, Luna. (For the record, they are Luna Moon, Looney, Tunes and Stink Butt.)