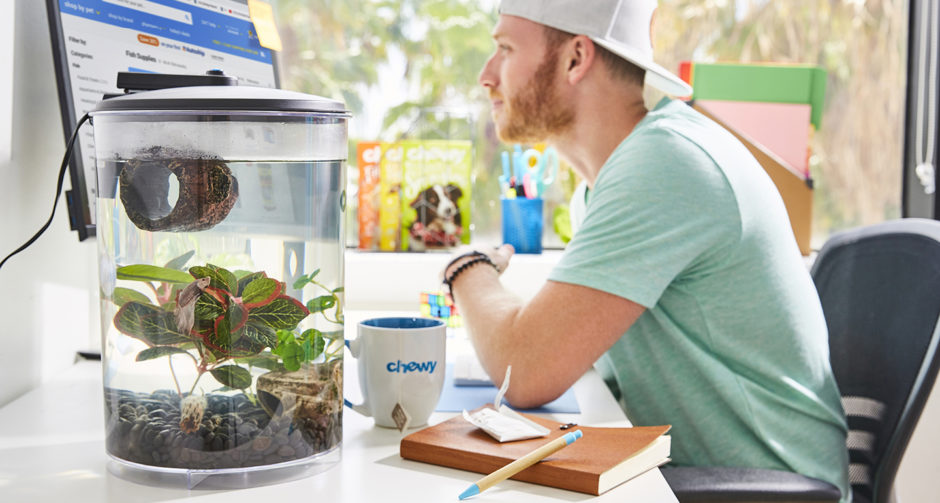 If you walk into the Chewy headquarters in Dania Beach, Florida, there is one thing you’re bound to see—pets! From dogs to fish, there is never a shortage of animal “employees” hanging around the office.

“I don’t have any pets at home,” Harty explains. “So, it didn’t take me long to want a pet of my own after working here.”

Harty wanted to start small, so he decided an office pet was exactly what he—and his team—needed. Together, they chose a betta fish and named her Onyx because of her beautiful black and white scales.

“She’s really helped bring the team together since we all take turns caring for her,” Harty says. “She also creates a Zen-like environment for us, which we love.”

Below are Harty’s top product picks for taking care of Onyx and creating a tranquil environment in which their betta can thrive. From the actual fish tank to the decorations to the cleaning supplies, he and his team have sought out the best fish products for Onyx. It’s no secret that she is truly a valued member of the team. 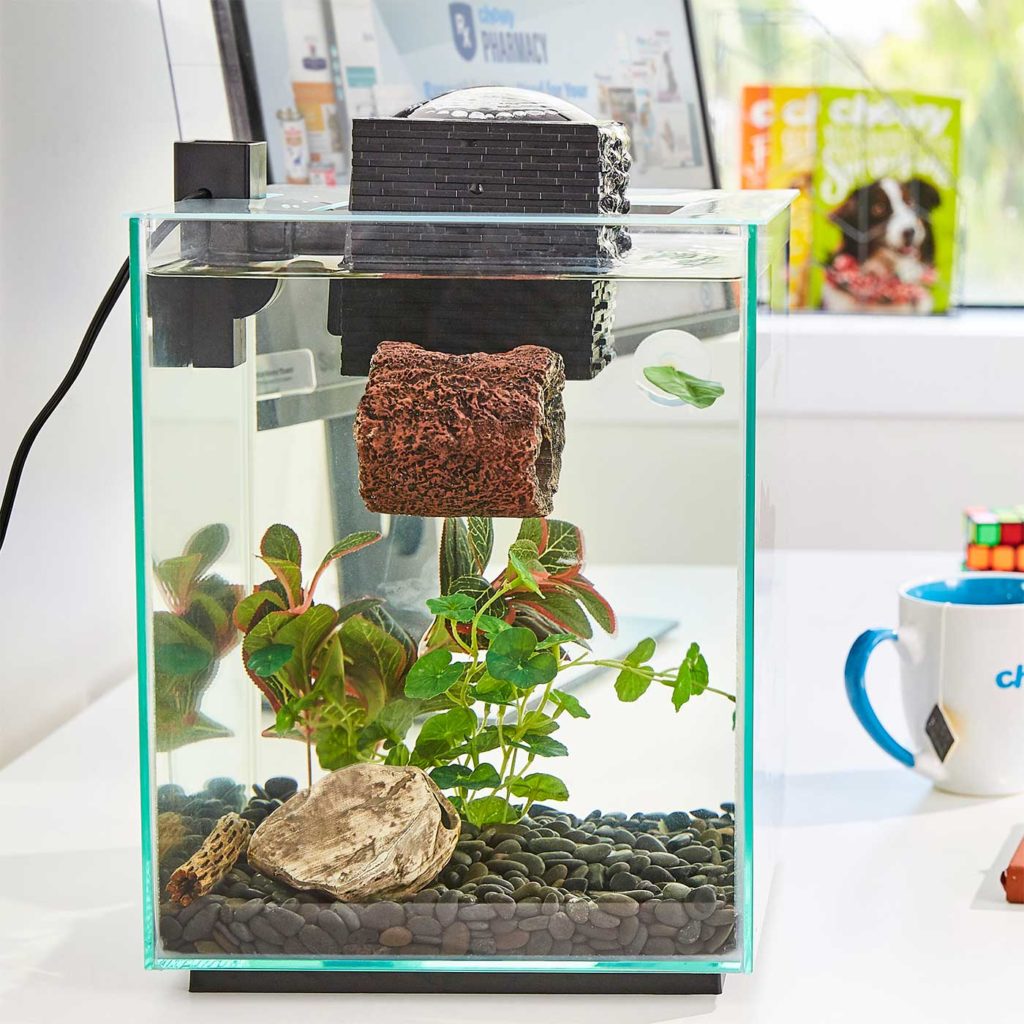 When Harty and his team were deciding on which tank was right for their soon-to-be fish friend, they knew exactly what they wanted.

“We wanted something that looked really Zen and modern but also had enough space for a fish to happily live in,” Harty says.

They first selected a 3-gallon tank, but soon learned that fish like Onyx need more space to live a happy life. So Harty upgraded to Fluval’s 5-gallon tank, with a minimalist design and LED lighting.

“[Onyx] has a lot of space to move around,” Harty says.

Before Harty’s team got Onyx, they hopped on the web and did their research to see what kind of environment betta fish thrive in.

“When we did our research, we found out that betta fish love to have places to hide,” Harty says.

They got a stone cave from this set to see if Onyx would hide in it. To nobody’s surprise, she did!

“She loves hiding in her cave,” Harty says. “During the day, she will happily hide in it and poke her head out to see what going on.”

Harty knew he wanted to decorate the tank with natural earth elements, and this driftwood delivers in more ways than one.

“We thought that driftwood was really cool looking at first,” Harty says. “But then we did some research and found out that driftwood can actually help some plants grow in the tank.”

For now, the driftwood is hanging by itself at the bottom of the tank with no plants. But that will soon be changing, according to Harty.

“We are super excited because we are about to get some Java Moss for the driftwood,” he says.

Gravel in a tank is like flooring in a home—it sets the vibe! From multicolored gravel to neutral tones, the gravel you choose is bound to have an impact on the look and feel of your tank.

“We wanted to have a natural yet modern look,” Harty says. “So, we chose this gravel because we thought it would be a good contrast for all of the natural elements we were going to put in the tank, like greenery.”

The gravel they chose is 100-percent sourced from nature, which fits the tank’s theme. Plus, it’s super durable.

“They are so easy to clean and stay shiny,” Harty says. “We haven’t had to get new gravel since getting Onyx.”

Although Onyx is a fish, she still finds ways to communicate what she likes and doesn’t like with her desk mates.

“When we first got Onyx, we fed her pellets,” Harty says. “When we gave her the food, she didn’t seem excited. It also looked like it was hard for her to eat, so we switched foods to see if it made a difference.”

After the switch to flakes, Onyx can now be seen swimming right to the top during mealtime.

“She loves this food,” Harty says. “She knows when it’s time to eat because she will come right to the top of the tank. If we don’t feed her on time, she will literally stare at us.”

Learn more about what to feed your fish.

This product is something Harty and his team make sure to never run out of because they want to ensure that Onyx swims in only the best conditions.

“This product is a must for us for every single time we clean Onyx’s tank,” Harty says. “We use this to make sure the tap water is cleared of any impurities that could be dangerous to Onyx.”

Once a month, Harty and his team clean Onyx’s tank. But before they do, they have to catch her.

“It’s so funny because she’s so fast,” Harty says. “When we go in with the net, she literally knows it’s time and swims in circles. It takes us a good five minutes to catch her.”

This net is made of strong nylon for safe fish catching and comes in six different sizes. It also has a handle that’s covered in three-ply vinyl for a secure grip.

“The handle makes it easy to hold and gives you a lot of control,” Harty says.

The floating betta log is the newest piece of furniture you can find in Onyx’s home.

“The moment we put this in her tank, she went straight to it,” Harty says. “She loves her log! It’s honestly her new favorite spot in the tank.”

The log has also become her new mealtime spot.

“The log has a hole on the top where we can drop a few flakes in, so we feed her while she’s inside,” Harty says. 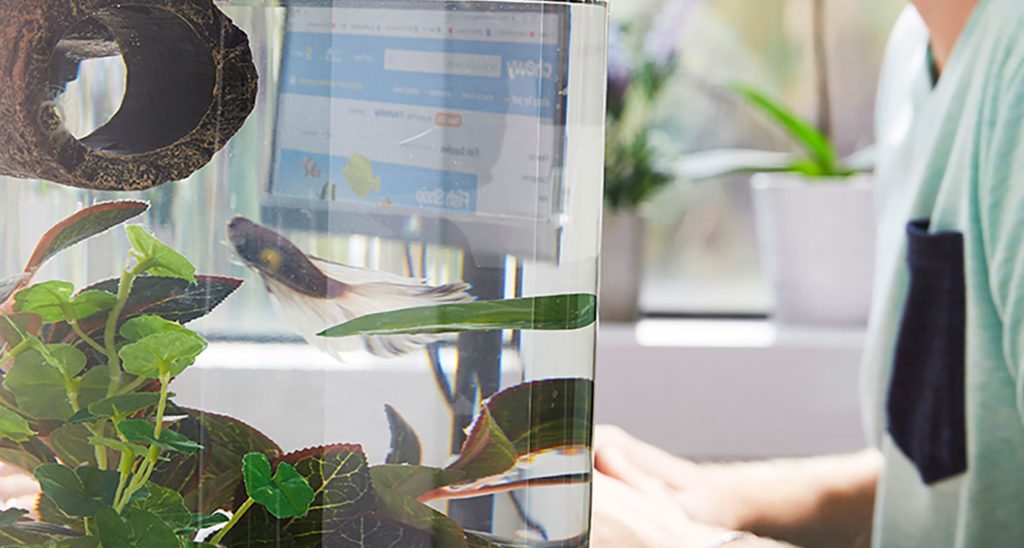 Onyx loves to kick back and relax, and one of her favorite spots to do that in is her leaf hammock.

“She lays on her hammock a few hours a day,” Harty says. “When she’s not hiding in her cave or hanging in her log, she’s on her hammock, kicking her fins back and letting all her worries float away.”

This hammock was designed with betta fish in mind, inspired by bettas’ wild environment.

“It’s so cute to see her relaxing on her hammock. It feels like it was literally meant for her,” Harty says.

The first thing that came to mind when decorating Onyx’s tank was that there must be greenery, Harty says.

“We really wanted greenery and a natural looking environment,” Harty says. “Although we love this decorative plant, we cannot wait to swap it out with some live plants soon.”