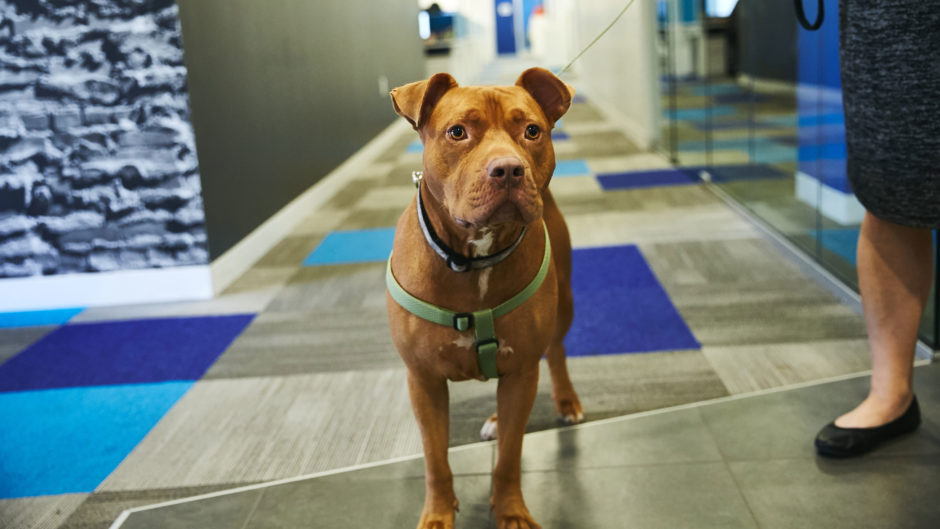 Some offices let you bring your pet in only on that special Take Your Dog to Work Day that comes just once a year. If you haven’t heard, it’s a day to celebrate the idea of having dogs at work that was created by Pet Sitters International. But some companies extend the office dog invitation to every Friday. And still others let their employees spend every day at the workplace with their four-legged office dog friends. Of course, if you’re a stay-at-home parent or freelancer or do other work from home, you don’t even need a special office dog day to be able to spend 24 hours with your pets (which might actually be a little too much quality time for some!).

We consider ourselves pretty lucky to be able to work side-by-side with our canine companions on any given day of the week. You never know when you’ll have an impromptu meeting with a familiar, friendly office dog who shows up your desk, or when you might see one of your favorite tailwaggers in the hallway. You can even set up a doggie playdate with the office dog of a co-worker who sits a few desks down the way.

Having dogs at work is fun and entertaining for your pup and everyone else, but it’s also full of mental and physical health benefits. According to Sally Morgan, a holistic physical therapist for pets and people, office dogs can help reduce stress in a big way. Stress can take a huge toll on the body, so reducing a person’s stress levels has a positive effect on their physical well-being, too. “It has been shown that petting dogs lowers a person’s blood pressure,” says Sally. “I have tested this with several veterans at a nursing home and saw up to 50-point drops in the top number in six men petting dogs for less than five minutes.”

As for the social aspect, an office dog can be great for “encouraging friendly interactions between employees and clients.” When your dog goes to greet your coworkers, it can become an opportunity for you to connect with your cubicle neighbors. This can lay the foundation for a good work relationship and makes it easier to collaborate on projects. Walking your dog also gives you a chance to take in some fresh air and come back to your desk feeling refreshed.

It’s time to meet some our favorite office dogs that put smiles on our face as soon as we walk in each day.

Zoe’s new around here, but she’s certainly proved her worth as Nicole’s little helper on several high-profile projects.

Job Duties: Making sure everyone stays on task (the task being giving her enough pets).

Spends Most of Her Time: Sleeping in her bed that’s too small for her (she has bigger dog beds and mats; the small one’s just her favorite).

Guilty Pleasure: She loves her plush dog toys and will do just about anything for Stella & Chewy’s.

Claim to Shame: Getting overly protective over her hedgehog toy.

What Makes Her Unique: Any time she sees an arm hanging over the side of the couch, she’ll nudge her head under for petting.

As the veteran office dog that’s been here the longest, Shelby’s well-known in the office. When people see her, they shout, “SHELBY!!” and run to pet her.

Spends Most of Her Time: Looking sleepy and trying to stay awake.

Guilty Pleasure: Rolling in the grass and finding cat poop in the yard.

What Makes Her Unique: She’s always hungry, but if she’s tired and you put the treat just out of reach, you can clearly see the inner dilemma she faces as she weighs the benefits of getting food versus the cost of having to move. Sometimes she just continues to sleep!

Allie’s a true-blue office dog, and she’s been by Justin’s side since day one.

Spends Most of Her Time: Sleeping and begging for dog food.

Claim to Shame: She is notorious for triggering her pet parent’s manager’s allergies.

What Makes Her Unique: Allie is so popular that you’ll often see her with a lipstick kiss mark on her cheek, which really shows up on her white coat.

Goofy’s name says it all. You can’t help but smile or laugh when Goofy’s around.

Spends Most of His Time: Looking for food, anywhere and everywhere.

Claim to Shame: During meetings, he snores so loud he wakes himself up. The meeting continues through the snoring.

What Makes Him Unique: He’s perfected the art of snoring. You could call it his personal pet project.

Izzie is a lover that can’t stand to be separated from her mom. She constantly looks back to make sure Michelle is right behind her as they walk down the hall.

Job Duties: Giving hugs (but only to humans).

Spends Most of Her Time: Attaching herself to mom’s hip.

Claim to Shame: She pinned fellow office dog Riley down and barked at him because her mom was petting him (jealousy brings shame).

What Makes Her Unique: Izzie is a big hugger and she likes to stare deeply into your eyes… she’s a romantic.

Ashton’s still a puppy, so he’s full of energy and always looking for a doggie playmate.

Job Duties: Greeting any and all dogs in the area.

Spends Most of His Time: Socializing with other office dogs.

Claim to Shame: He escaped and ran around the office, and several coworkers were chasing after him, trying to catch him.

What Makes Him Unique: He likes to army crawl like he’s on some sort of secret mission.

Henna knows how to use her powers of cuteness. She often sits at the edge of her pen, staring at the closest person until they turn around to pet her.

Spends Most of Her Time: Sniffing around and eating the dog treats a coworker gives her.

Claim to Shame: Henna has a long list of infractions—she threw up in the kitchen and under two desks, pooped in the studio, and there was that one scuffle with an office dog named Wolf.

What Makes Her Unique: She has an underbite and snores. She also sleeps with her tongue out.

This dynamic duo has only been coming to the office for 4 months, but they’ve settled right in to the Chewy family.

Job Duties: Daisy is a fool-proof desk perimeter alarm system, while Dodger is great as a doggie stress ball/foot warmer.

Spend Most of Their Time: You’ll find Daisy “talking” in a serious tone to anyone who will listen. Meanwhile, Dodger’s sitting on someone’s lap, eating bananas, or just snoozing the day away.

Favorite Office Toy: As long as Daisy’s by her mom’s side, she has no interest in toys. Dodger, on the other hand, must have his three prized Lamb Chop Plush Dog Toys.

Guilty Pleasure: For Daisy: Did we mention chicken jerky?? And Dodger loves belly rubs and his Lamb Chops trio.

Claim to Shame: Once (to date), Dodger passed gas silently in a meeting while sitting on a coworker’s lap. And the ever-fearless Daisy barked at her mom’s boss 5 seconds after being introduced.

What Makes Them Unique: Daisy’s taken it upon herself to adopt her two Puggle cousins as her puppies, even though they weigh 20 pounds more than her and are 2 years old. She also loves to get all her doggie friends howling and has led a dog chorus of seven on numerous occasions. Dodger is a people lover and the meeker of the two. He waits quietly until someone offers him a banana or a belly rub—or both!

Riley’s known as the “fancy dog” in the office, and he’s a natural star. He gets a lot of requests from the studio team to take the lead role in their upcoming Chewy videos.

Spends Most of His Time: Taking laps around the Marketing office to see who’s available to pet him. And when he’s not doing that, he’s obviously getting his beauty rest.

Claim to Shame: When anyone gets up from their desk, he steals their chair.

What Makes Him Unique: He’s always smiling, and when he walks down the halls, he prances and wiggles his butt.

Maeby is like the dog next door—she’s everyone’s favorite office dog neighbor.

Spends Most of Her Time: Sticking her snout into every garbage can in sight!

Claim to Shame: She peed on the floor while her mom was interviewing a candidate (he accepted).

What Makes Her Unique: She licks the air incessantly and can maintain eye contact for hours!

After coming to the office for a year now with his mom, Barney knows his way around, and this well-known socialite will entertain anyone who’s willing to pay attention.

Job Duties: Multi-Tasker/Entertainer. He makes sure that everyone knows when he’s around and always leaves everyone smiling. Barney will do tricks for anyone who has treats.

Spends Most of His Time: Walking through the aisles, getting hugs from everyone.

Claim to Shame: Once he thought he was being sneaky by trying to steal food off someone’s desk. His mom caught him and yelled his name so loud that he bumped his head on the desk in shock in front of everyone.

What Makes Them Unique: Barney has a very unique way of sleeping on his back, and sometimes will cover his eyes with his paws to keep the light out.

Pipa is full of charm and charisma. She spreads happiness everywhere she goes, and she has friends all over the office.

Spends Most of Her Time: Making friends and exploring!

Guilty Pleasure: She loves tapping into her wild side. She lives for the outdoors, and she’s always finding mud piles to jump in and paths to explore.

Claim to Shame: One night, her mother noticed that she had brought a bone back from somewhere in the office. She looked around the corner and saw a huge pile of treats, toys and goodies piled on her bed that she had gathered from all the other office dogs.

What Makes Her Unique: She does a silly dance with her paws in the air as she begs. She’s also highly intelligent and her mother swears that she understands English.

This terrific twosome sits right by the door, so they’re the unofficial welcome committee for any, and all, visitors.

Job Duties: Greeting everyone by the door in hopes of getting extra treats.

Spend Most of Their Time: Mingling with other office dogs. Bugsy is very timid, and loves to stick close to his mom. Tank is much more adventurous, and likes to wander around from desk to desk greeting everyone. Sometimes you’ll find them chasing a random ball or napping on the couch.

Guilty Pleasure: Whatever their mom is eating

Claim to Shame: In a meeting room with four other people, Bugsy let out some silent gas that cleared everyone out. They were on a conference call, so no one could say anything because they didn’t want to embarrass themselves.

What Makes Them Unique: Tank is actually a special needs dog. He suffers from a neurological condition called myoclonus, and he has a constant facial twitch. It has taken some getting used to, but he’s a happy, healthy boy on medicine to control his condition. Bugsy is a complete momma’s boy and can’t be more than a few feet from her at all times.

Don’t be fooled by his size and stature—this guy’s a cuddler at heart who loves to snuggle.

Job Duties: He’s new to the office, so he’s known as “the dog in all the pictures,” on his mom’s desk and phone. We see a modeling career in his near future.

Spends Most of His Time: This is his first time in the office, so we’ll have to see if he’s a snoozer, a roamer or a pu