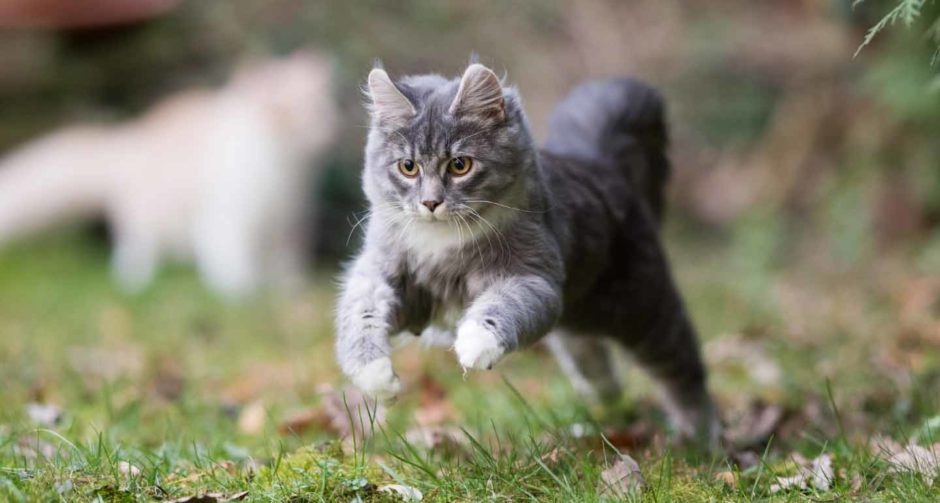 Cats are known to land successfully and gracefully if they lose their balance and fall. This special ability, known as the cat righting reflex, is an interesting phenomenon and a unique quality specific to felines. This natural reflex enables a jumping cat to orient himself mid-drop, allowing him to safely land on his feet.

Whether they’re large, small, feral or domestic, all cats are equipped with this particular reflex. According to Dr. Rachel Barrack of Animal Acupuncture, the explanation of how cats always land on their feet is that they have “an extremely flexible backbone and lack of clavicle (collar bone).” Thanks to the feline anatomy, “Cats are born with the unique ability to orient themselves to land on their feet following falls,” says Barrack. And with such an exclusive ability, it’s no wonder we find the act so awe-inspiring.

How Do Cats Land on Their Feet?

Just like humans, baby animals can pick up certain skills at a young age very easily. While the righting reflex is not a learned behavior or trick picked up from following in mom or dad’s footsteps,  “this ability begins at 3-4 weeks and is usually fully ingrained by 6-7 weeks of age,” says Barrack.

The way the cat righting reflex works is that the cat begins to shift his balance as soon as he feels himself falling. In addition to being naturally built to handle most falls, a cat’s vestibular system helps him automatically determine right side up. This is the sensory system in most mammals that is located in the inner ear to provide a sense of balance and spatial orientation.

As a cat falls, he will begin to rotate his head and spine, arching to accommodate the need for flipping his body while spreading and relaxing to act as a parachute while in the air. The front and hind legs follow suit, repositioning directly under the cat to get under the body before hitting the ground. And while the tail regularly acts as a balancing rudder in a cat’s daily activities, it is fairly insignificant during a freefall.

Falling Can Be Dangerous for Cats

As amazing as the cat righting reflex is, our furry companions are certainly not invincible. “A falling cat can still sustain serious injuries such as broken limbs following falls,” says Barrack. Cat falling injuries are often worse following shorter falls, as the feline body hasn’t had enough time during the drop to right itself fully.

Even though your cat has this amazing ability, you should of course never try to test your cat’s abilities. To prevent potential injuries and keep your four-legged companion out of harm’s way, it’s essential to safeguard your home from encouraging cat jumping. Make sure the windows in your home are safely screened to help keep your cat from falling. Although cats have been proven to do better with falls from greater heights, never purposefully drop a cat or recreate a scenario that would test your cat’s righting reflex.

With wandering spirits and inquisitive personalities, cats rely on the righting reflex as a natural safety net to help protect them from potentially life-threatening scenarios. Even though cats are naturally built to save themselves from a fall, it’s important to remember that a cat’s legs may not be able to absorb the shock, regardless of his body’s ability to handle the situation. If you believe your cat has suffered a fall injury, be sure to seek medical help from your veterinarian right away. Even though this natural ability may seem like an indestructible superpower, your cat is still vulnerable to danger, and he relies on you to keep him safe.

Dominika is a Chicago native who graduated from DePaul University with a bachelor’s degree in English. Having nearly a decade of combined experience in the fields of marketing, journalism, UX and social, she thrives in the fast-paced and ever-changing world of digital media. When she is not working, Dominika can be found at the beach, traveling the world or cuddling her female Rottie named Ezra.