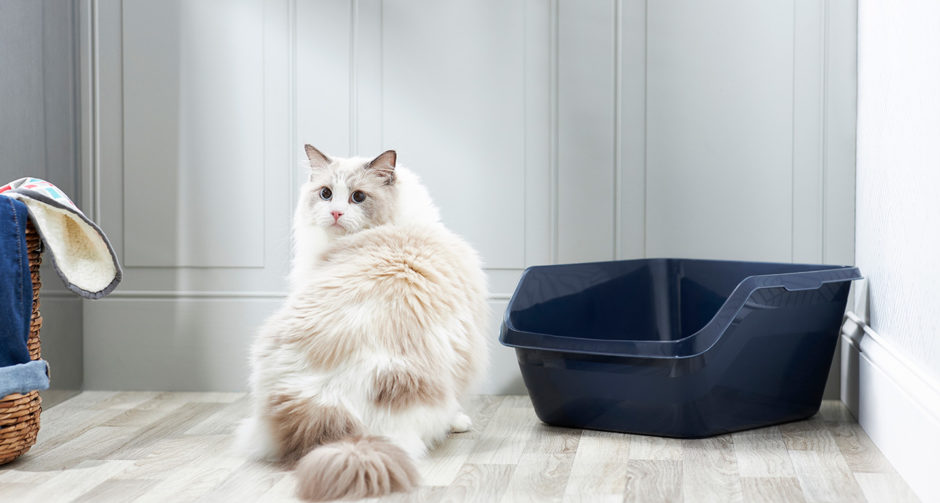 “Some may only urinate inside, while some may only defecate inside,” says Rachel Barrack, DVM, CVA, CVCH, owner of Animal Acupuncture in New York City. “Some cats abruptly refuse the litter box altogether.”

In all scenarios, though, it’s exasperating to say the least, and it’s important to resolve the issue before your cat makes a habit out of eliminating in inappropriate places. But, you can’t resolve the issue until you figure out what is causing it in the first place.

“There are many reasons a well-trained cat suddenly stops using the litter box,” Dr. Barrack says.

While often the reason is one that is relatively easily resolved, other times it can be more serious. Even if you think you know the reason behind your cat not using the litter box, “it is recommended that you schedule an appointment with your veterinarian to rule out any underlying medical conditions,” Dr. Barrack says.

1. The Litter Box Is Different

Did you move the litter box to a new area, buy a new box or switch litter? It might seem like a minor thing to us, but “cats develop preferences to certain litter and boxes,” Dr. Barrack says.

For example, if you switched from an open litter box to one with a hood, the hood itself may be what is putting off your kitty.

“Many cats do not like [hooded litter boxes] because their instincts tell them that a contained space is dangerous,” Dr. Barrack says. “Even if there is no immediate threat, the fact that there is no space for them to escape in case of an emergency is enough to make a cat uncomfortable and avoid using the litter box.”

These switches can be especially problematic if you make them all at once and may lead to your cat peeing outside the litter box.

You can avoid this litter box problem by making subtle changes.

“If you’ve found a new and better spot for the litter box, move it a few feet every couple of days until it’s in the desired location,” Dr. Barrack says.

The same goes for when you purchase a new brand or type of cat litter.

Dr. Elsey’s Precious Cat Ultra Litter Attractant can also be used to entice your cat to use the new litter.

The reason why your cat stopped using the litter box may be right under their cute, little (and very sensitive) nose: It stinks! Cats like a clean litter box and will have no problem opting for a potted plant if their designated space is not up to their standards.

“The pan should be scooped out every single day, and then washed out and refilled with fresh litter at least once a week,” Dr. Barrack says.

3. The Litter Box Is Too Small

If your cat is peeing outside the litter box, take a good look at both your cat and the box. Did you buy it when your cat was a kitten? Or, maybe your older cat has put on some weight. Cats can outgrow their litter box and then refuse to do their business in a space that’s too small for them to get comfortable.

“Make sure [the litter box] is large enough—about one and a half times the length of your cat is a good rule of thumb,” Dr. Barrack says. “They should be able to easily turn around in it. If they can’t, you should get a bigger box.”

The Omega Paw Roll’N Clean Cat Litter Box comes in a large version that is 23 inches long, making it the ideal choice for bigger cats.

Yes, really. “Multi-cat households develop a hierarchy, and cats can pick on each by other preventing litter box usage to establish dominance,” Dr. Barrack says.

Dr. Barrack suggests making sure that each cat in the household has their own box, ideally in different parts of your home.

“Some parents of multiple cats have one extra box to ensure this sort of problem doesn’t happen, which is a good idea,” Dr. Barrack says.

Cats can pick up on household stress, whether it’s in the form a new member of the family (human or pet), a move or a new job that requires you to be away more.

“Cats, much like preschoolers who regress in potty training, can act out when they’re stressed,” Dr. Barrack says.

If you and your veterinarian determine stress is the cause of your cat not using the litter box, try to establish a routine for your kitty moving forward.

“If things are hectic at home, make an effort to keep your cat’s life as consistent as possible as far as feeding, playtime, sleeping goes. A few extra cuddles can’t hurt, either!” Dr. Barrack says.

If it hurts to urinate and/or defecate, cats can understandably be reluctant to use the litter box, says Dr. Barrack.

“Urinary tract infection, feline interstitial cystitis, bladder or kidney stones and constipation can all be a cause of your cat not using the litter box,” she says. “Also, older cats may have developed arthritis or another condition that makes getting into and out of the box challenging.”

Dr. Barrack advises consulting your vet right away if your normally well-trained cat of any age abruptly stops using the litter box. They can test for and diagnose any possible medical reasons why your cat has stopped using the litter box, as well as provide recommendations for treatment.

When your feline companion mysteriously avoids the litter box, it’s upsetting—to you as much as to your cat! But by running through this checklist of common causes, and staying in close communication with your vet, you can get to the bottom of why your cat stopped using the litter box. Before long, your furry friend will be acting like themselves again.

By: Christina Vercelletto
Christina Vercelletto is a pet, travel and lifestyle content specialist and a former editor of Parenting, Scholastic Parent & Child, and Woman’s Day. She lives on Long Island with her Chiweenie, Pickles, and 20-pound Calico, Chub-Chub.