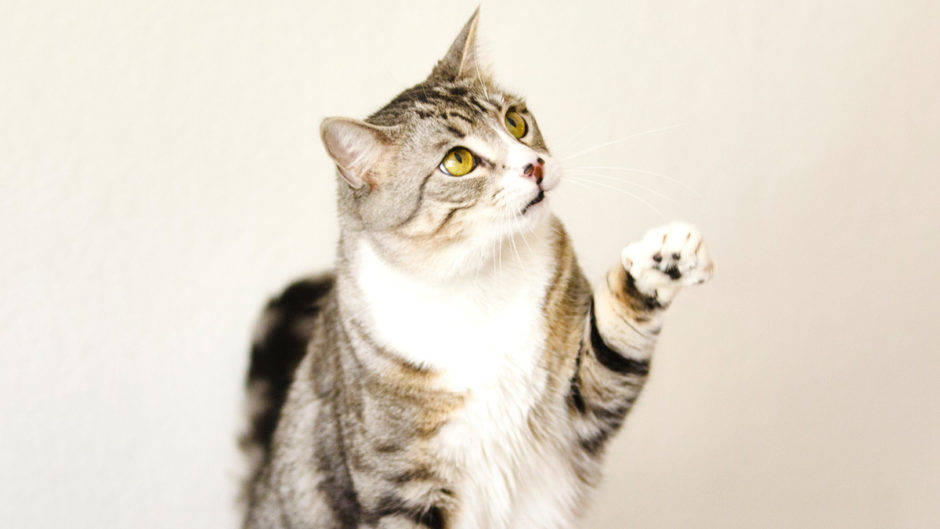 If you think kitty paws are the cutest part of a cat, you’re not alone. Their little toe beans are so lovable that they’re proudly featured in fabric patterns and in a whole series of photos of cats sitting on glass tables (yes, it’s a thing). But cat paws aren’t just for show—they perform plenty of impressive and fascinating feats that you wouldn’t know just by looking at them.

Here’s a rundown of all the ways cat paws are not just adorable, but pretty amazing.

1. They Act Like Sheaths That Hide Your Cat’s Claws.

All cats but Cheetahs have retractable claws. And just like Wolverine (the character, not the actual animal), cat paws hide these claws until they need to use them to hunt or scratch.

“If a cat kept his claws out all the time, his claws would ensnarl everything!” says Dr. Sarah J. Wooten, DVM, CVJ, consulting veterinarian for Big Barker. “Fortunately, when a cat isn’t using his claws, he keeps them retracted into sheaths on the end of his toes.”

That means the claws can stay sharp and protected when they are relaxed and sunken into the toe pads. These hidden sheaths also keep claws from hitting the ground and making a noise, allowing kitties to stalk their prey undetected as well as sneak up on your water cup to dip their little kitty paws. But when your cat runs, climbs or jumps, the paw pads release the claws, which have the extremely important job of gripping the ground and other surfaces so your cat doesn’t fall or lose her balance.

2. The Front Paws Have More Digits Than the Back Paws.

If you look closely at a cat paw, you’ll see that it has an extra little “toe” on the front paws. There are five digits, or toes, on each front foot, and four on each back foot, for a total of 18 digits. The extra toes on each front paw are actually dewclaws, which are kind of like thumbs for kitty paws, and they’re located a bit higher up than the other toes.

You can find dewclaws on many mammals, birds and reptiles, and they’re often “vestigial,” or just for show, having lost their original function. But for cats, the dewclaw is still useful for hunting—even if it’s just tossing around a toy mouse in the living room. However, it doesn’t wear down as fast as the other claws, so be sure to keep the dewclaw trimmed using the proper tools.

3. Cats Can Have Extra Toes.

Aside from the dewclaws, some cats can have even more toes on their kitty paws. They’re called polydactyl cats, and they can have as many as six or seven toes on each paw—the world record for most toes on a cat is 28 toes.

Many people refer to them as “Hemingway cats,” after the white six-toed cat that was given to Ernest Hemingway by a ship’s captain when he lived in Key West, Florida. The Ernest Hemingway home is a national historic landmark, and it’s also still home to 40-50 polydactyl cats—descendants of Snow White, the original six-toed cat. Although not all of these cats have the tell-tale mitten paws, they all carry the gene, so their kittens can be polydactyl. If you’ve never seen one of these amazing cats, it’s time to plan a trip to Key West!

They don’t have to speak in front of a crowd of people, but that doesn’t mean your feline friend doesn’t get nervous. Just like we get sweaty palms, cats can get sweaty paws. While people have numerous sweat glands to help them cool down, cats only have these glands in their paw pads. Because kitty paws are small, they don’t really work as an efficient cooling system.

“More often you will notice your cat’s paws sweating if he is stressed or frightened. Just like people, fear can make cats break out into a cold sweat,” says Dr. Wooten.

You might notice signs of sweaty paws during stressful vet visits or anytime your kitty has anxiety.

“Cats are fastidious about their hygiene, and a combination of paws and tongue are their tools of choice,” Dr. Wooten says.

If you’ve ever watched cats groom themselves, you’ll see how they use their paw as a tiny fur scrubber to clean their ears, nose and head. First, they lick a paw, and then they rub the paw repeatedly in a circular motion over each area. These built-in loofahs come in handy when there’s no other kitty sibling to groom their face for them.

You might not have ever thought about what color your cat’s paw pads are, or why. The color of the pads generally coordinates with your kitty’s fur color, which makes sense. But sometimes, the paw pad color will match the nose.

White cats usually have pink pads, and the same goes for ginger cats. Black kitties have black pads, and gray cats have gray pads. Tuxedo cats can have pink, pinkish-white, black or a mix of these colors on their paw pads. In cats with multiple coat colors, like Tortoiseshell or Calico, you’ll see interesting color combinations—maybe two pink jellybeans and the rest black, or multi-colored pads and toes.

7. They Make the Best Biscuits.

Cat owners know that when you have a cat, there’s no need for one of those bread-maker machines that sit on countertops and gather dust. Chances are that you’ve had a purring feline on your lap or curled up next to you at some point. And if he was really content and relaxed, he was probably “making bread” or “making biscuits” by kneading his little kitty paws on you. This behavior goes back to kittenhood, when kneading helped stimulate milk flow during nursing. For adult cats, it’s a sign of ultimate happiness. Of course, there is another motive—as they knead, they’re also marking you with their scent.

8. The Cat Paw Pad Is a Hidden Scent Factory.

Underneath the tufts of fur, deep in the grooves of the cat paw, lie secret scent glands. Whenever your cat makes biscuits or scratches her post, she’s also marking her territory with her own trademark scent. It’s a special mix of pheromones that’s unique to your cat, like a thumbprint.

“These are usually undetectable by human noses, but other cats that come by can read the ‘paw mail’ that your cat has left behind,” Dr. Wooten says.

So while you’re enjoying some cuddles and kneading, those cat paws are working overtime to claim you as their person. Surrounding themselves with their familiar scent is calming and reassures cats that they are still the rulers of their domain. This is also one reason why cats instinctively like to scratch objects, so be sure to offer plenty of healthy outlets, such as a vertical scratching post or a low-profile Bergan Turbo scratcher for cats that love to sink their claws into cardboard.

9. They Act as Shock Absorbers and Sensors.

Cats are pretty good jumpers. And they’re pretty good at landing gracefully, too. They can thank their kitty paw pads for providing extra cushioning and allowing them to land so silently. Not only do they absorb sound and lessen the impact after a big jump, but your cat’s sensitive paws also come in handy as little sensors. Paw pads have plenty of nerve receptors that give them important information about their surroundings, helping them to sense vibrations, textures and pressure. This knowledge alerts them to possible predators and the movements of their prey. With hidden claws, jump-silencing padding, and fine-tuned sensory abilities, a cat’s sensitive paws help make your kitty the exceptional hunter she is.

Both cats and dinosaurs are digitigrades, which means they walk on their toes. Even though we might think of cat paws as feet, they’re more like toes, and the actual foot extends up to the second bend in their leg. “The reason why they have evolved to walk on their toes is that it makes them quieter and faster, which makes cats better hunters and better able to avoid predators,” says Dr. Wooten. Being stealthy and quick gives cats a huge advantage for survival. Felines share this useful trait with dogs, hyenas, pigs, hippos, elephants and yes, even dinosaurs.

Since a cat paw has tons of nerve endings and blood vessels, it can be pretty painful if they get hurt. Even if you don’t notice your kitty limping or any sign that their paw is hurt, you should regularly check the paw pads for hidden dirt, foreign objects, burrs, cracks, bumps, swelling, redness, cuts, scrapes, bleeding, ingrown nails or signs of infection. Clean them with water, and if you notice possible wounds, take your kitty to the vet to get checked out. Also keep in mind that because cats groom constantly and use their paws to do so, chemicals such as floor and surface cleaners can be harmful. If your cat walks on the wet floor or lies down on a counter that’s covered in cleaning products, she could end up ingesting them as she licks her fur or paws. ResQ Organics Skin Treatment balm can help treat skin issues like rashes, insect bites, cuts and abrasions.

For daily paw care, TropiClean’s Spa Paw & Pad Treatment helps restore and nourish dry or cracked pads. Be sure to also check your cat’s nails regularly to make sure they’re properly trimmed and healthy. Dr. Wooten advises that you should “Ask your veterinarian or breeder how to press on the nail to unsheathe it so you can inspect your cat’s nail health.”