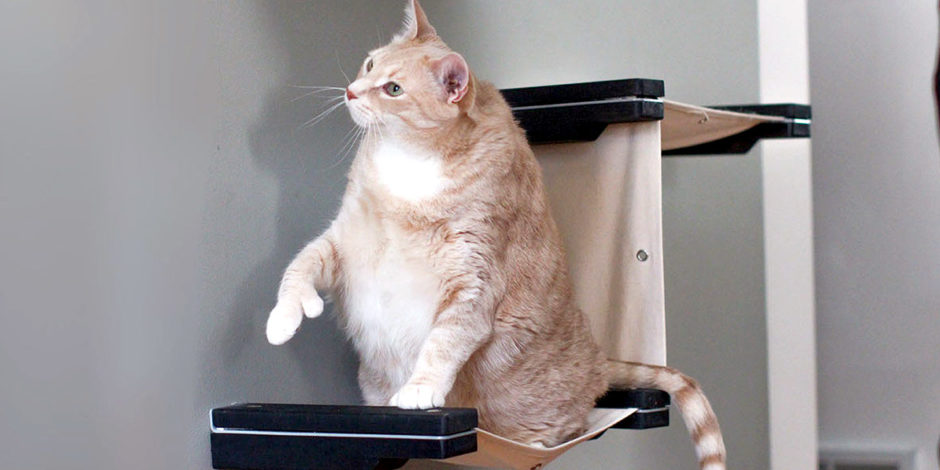 Bronson the cat has been limited by the things he can do because his weight often holds him back. But the more weight he sheds, the more obstacles he overcomes!

The most recent obstacle? Climbing up onto a wall-mounted, hammock-style cat shelf.

“This month, Bronson jumped up on the lowest hammock [that is mounted onto our wall],” says his pet parent, Mike Wilson.

While jumping up onto a 17-inch-high cat shelf might not sound like a big deal, it is for this overweight kitty.

“He could barely fit on the hammocks six months ago, so it really meant a lot to see him getting around so well,” Mike says.

When Mike and his wife, Megan, adopted Bronson from the Michigan Humane Society back in April 2018, they took on a pretty hefty responsibility—literally and figuratively. Bronson was 33-pounds—about three times the size of an average housecat—and needed to lose a good deal of weight in order to get healthy.

So far, Bronson, who lives in Grand Rapids with his pet parents, has lost about 7 pounds, and he has around 6 more pounds to go. And while the numbers on the scale show that he’s losing weight, his actions show how much he’s gaining from life by getting fit.

What is Bronson’s latest weight update for March?

This month we lowered Bronson’s calories by 10 percent and also were told [by his vet] to [aim to lose] .5 pounds. Since it was the first time we lowered his calories for a long time, we did unposted weigh-ins every week to [make] sure he wasn’t losing too quickly.

After the first week, he had already lost .5 pounds, but this is always tricky because depending on if [he uses] the bathroom [or not], his weight fluctuates quite a bit. We decided to start giving him extra treats the next week and the second weigh-in remained the same.

By the end of the month, he had lost .6 pounds. The fact that he went over [.5 pounds] isn’t great, but it was by so little that we’re not very worried about it. It’s going to be hard to have him losing exactly .5 pounds, since his weight goal has been lowered from .7-1 pound to now .5 or lower. [However,] we would rather have it be a little over than a little under.

Has Bronson noticed that you’ve reduced his calories? How has this transition been?

He’s been acting a lot [hungrier] than [usual]. We keep hearing about people feeding their hungry cats green beans or zucchini because they can fill [the cats] up without [any added] calories. We want to double check with his vet [before doing that] to see if there would be any issues.

What are Bronson’s favorite exercises this month?

We’ve [still] been playing with Bronson using a palm stem [which we discovered he goes crazy for last month]. These plants are cat safe and our cats all love playing with them.

Are there any workouts Bronson is burnt out from?

Bronson’s a little over the stairs. He will still go up and down regularly, but he feels like it’s asking a little too much to have him chasing treats up and down them.

[This month] he’s started sitting at the top of the stairs and glaring down at the treats until there are enough to make it worth the trek.

Do you think having three other cats at home encourages Bronson to get up and move?

I really think they do. Our other cats are really active and kind of chase each other around throughout the day. Sometimes, it can be really loud [when they’re chasing each other]. Every time Bronson hears them, he gets up to investigate what is going on.

We also think that it’s been incredibly encouraging for him to see the other cats on the countertops or the cat wall. Especially if they’re eating up there.

In what ways has Bronson surprised you this month?

He’s been surprising us almost every day. I think a huge [surprise] this month was when Megan found him on the kitchen counter. He’s been watching our other cats jump up there for months and had reached the end of his rope. [So, when] we got a new couch, which has a higher back on [it], he jumped up to a really high ledge, above our staircase that circles around to the countertop.

It was exciting to see him being such an explorer, but really, really scary because it’s so far down. We just bought a pet net that we’re going to install and try.

Tell us more about his newfound interest in the cat wall.

This month, Bronson jumped up on the lowest hammock that leads up to where we feed the other cats. A few days prior to this, he put his two front paws up to the hammock and Megan lifted him up the rest of the way. And then a few days later, he jumped up on his own. He really wanted to get up to the second hammock, but decided to call it a day at the one. He also did a 180 on the hammock.

Since we feed our other three cats up on their hammocks out of Bronson’s reach, we think it’s been a great motivator for Bronson’s new found interest in scaling the wall.

We know it’s been chilly since he got on flea and tick meds. Has he finally been able to head outdoors this month? If so, is he liking the outdoors?

Bronson finally went out to explore the yard a bit. Our plan was to feed him his lunch just outside the door and to leave the door open in case he wanted to go back in afterward. He only ate a couple of bites and then just wanted to walk around the house.

We really want to take him down to our stream at [some] point, but for now we just [spend] around 15 minutes checking out the perimeter of the house. He did surprisingly well walking [with] his harness [on] and it was amazing to see him enjoying himself and taking in some fresh air.

We think the most important tip we could share for somebody [with an overweight] cat is to try to stay away from free feeding and dry food. We contribute a lot of Bronson’s progress to a healthy wet food diet. He’s currently been on a grain-free wet food diet by Weruva.

We’ve [also] heard really good things about a raw diet and are considering switching him to that. We’re going to do a sampling of different brands by adding small amounts to his wet food to see if there’s one that sits well with him.

Did any of the stuff we sent over this month help Bronson?

The FURminator brush is amazing! He absolutely adores being brushed. Also, the Frisco canopy cat bed cracks us up. We really thought it was too small when we first opened it, but he totally [fits] inside [it] and has been [taking] naps in there. Sometimes it’s funny watching him sit in it, because the whole thing goes lopsided with the way he sits down.

What are Bronson’s goals for April?

His weight goal next month is [to lose] another .5 pounds.

[Also,] over the last couple months, he’s been acting friendlier with our other cats. He still tends to dish out jabs to the others just before we feed him, but other than that, he really doesn’t seem to mind the other cats being around.

A bad habit he formed early on is to paw at the other cats as they walk by. It never looks threatening because his claws are very dull. [It] always seemed like he was thinking they were going to attack him, and he wanted to [make sure to get the] first blow in. These days, he can be face-to-face with the other cats, without batting in defense. He squints his eyes, like he thinks a paw is coming at him, and usually they just move on. We hope that this trend continues throughout April.