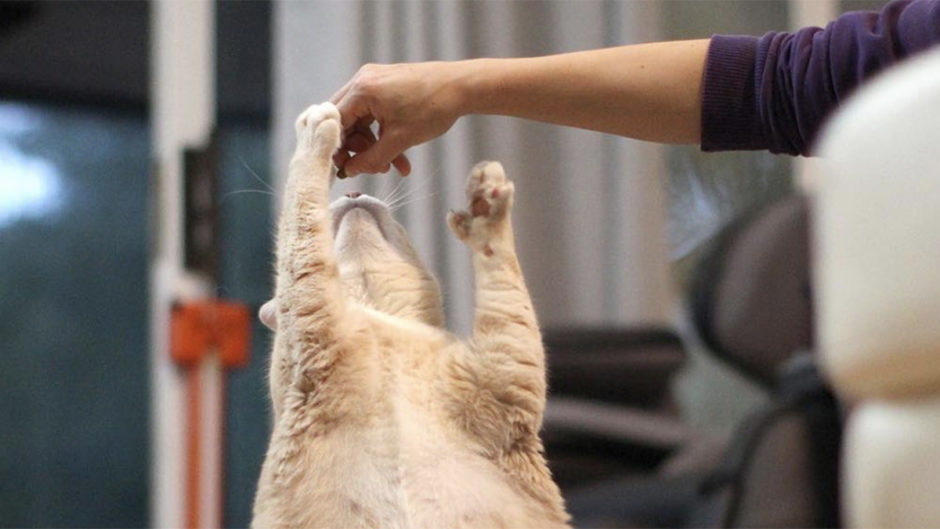 For many people, the new year is a time for getting into shape—and for Bronson the cat, it’s no exception.

Last month, Pet Central introduced readers to Bronson, an overweight rescue cat who was once 33-pounds.

Since his pet parents, Mike and Megan Wilson, adopted him back in April 2018, Bronson has been on a mission to lose weight and live a healthier life. Bronson’s goal is to lose about a pound every month until he reaches a normal weight for his body frame, which his vet suspects will be between 12 to 15 pounds.

Pet Central spoke with Mike to get the scoop on how the month of January went. While Bronson struggled to reach his weight loss goal for the month, Mike said the hefty kitty did achieve something he’s never been able to do since coming to live with his new family: stand on his hind legs for an extended period of time (all in the name of treats, of course!).

Plus, Bronson finally reached a healthy enough weight to go on flea and tick meds, which will mean more outdoor exercise fun in the future.

Mike also let us in on a hilarious new tactic Bronson has started doing to get his humans to feed him his breakfast first thing in the morning.

Read on for more exclusive updates.

Did Bronson reach his goal this month?

January weigh-in! This month, Bronson only ended up losing .4 pounds, which brings his total weight to 27.3 pounds. Courtesy of Mike and Megan Wilson.

No, this month wasn’t a great one for weight loss. Last month he was at 27.7 pounds [and] we were hoping that [this month,] he would drop down to 27 pounds, but he ended up losing about half of his goal. Bronson weighed in at 27.3 pounds.

At least his weight kept going down, not up! What have you done this month to help him lose weight?

We try to play with Bronson for about 20 minutes a day, and we [also] started feeding him downstairs so that he needs to walk up and down the stairs multiple times daily.

Bronson waiting for dinner. Courtesy of Mike and Megan Wilson

What is the most exciting milestone for Bronson this month?

Reaching his flea and tick medication goal weight (27.5 pounds) was the biggest milestone this month.

Also, we’ve been having Bronson stand up for treats and have [noticed] that he’s standing up longer and longer each time. It used to be right up and down, [however] this month he’s been showing a short pause while he’s up.

“Will work for treats!” Courtesy of Mike and Megan Wilson

Since he can now get on flea and tick medication, does this mean he can head outdoors with you?

It’s snowing in Michigan, and [currently] fleas and ticks aren’t an issue with the cold weather, [so he hasn’t started his medication].

Bronson is still warming up to the chilly, winter weather. Courtesy of Mike and Megan Wilson

[However,] we’ve tried to get him [outside] and he’s come a couple times, but he’s not a big fan of the snow, so he just smells around the house.

Once it gets warmer, we’re hoping to start taking him on walks. We recently bought a new harness because he hated his last one. The new one has thinner straps and fits him a lot better. We’re going to start feeding him snacks while he has it on to try and warm him up to it.

What else have you worked on with Bronson this month?

We’re also working on his teeth right now because his teeth were really bad when we took him into the vet. We switched out his daily cat treats from his old kibble to teeth-cleaning treats and we also started brushing his teeth twice a week. Right now, he hates it and doesn’t cooperate very much, but we’re sure he’ll warm up to it.

Any setbacks this month?

We did an early weigh-in halfway through the month to see how the weight loss was going in case we needed to make adjustments.

[When we weighed him,] he was barely down at all, so we made a couple adjustments. One [adjustment] was watering down his wet food a bit. Another change we made was to start feeding him most meals downstairs to get him hustling up and down the stairs.

We’re [also] very worried about getting his weight down to 25 pounds so he can go under anesthesia and get his teeth fixed, so being short of a monthly goal is more important to us until that gets done.

Did Bronson do anything mischievous his month?

I forgot to put the cap on the cats’ dental treats, and while I was busy tossing them to Bronson, Ickle, our other cat, tipped over the entire jug of them and they went everywhere. It’s the fastest we’ve ever seen Bronson move before. He was like a lightning cat, moving from piece to piece. He’s smart and charming, so he definitely knew he was being bad, but even when he’s being bad, there’s something really cute about it.

I really wish we caught it on video, but we were too busy trying to pick up the pieces before he did.

This [happened] after we did the secret two-week weigh-in where we found out that he wasn’t losing much weight, so maybe it was less cute than something like that normally would be.

Has Bronson surprised you this month in any way?

This month he started doing something we haven’t been able to catch on video because it happens so early in the morning. If we use the bathroom first thing in the morning instead of feeding Bronson right away, he’ll follow us into the bathroom, strut over to the toilet paper, and take a huge bite out of the roll, as if to show us how hungry he is. He doesn’t eat the paper but just drops it to the floor.

If Bronson could run away, [he’d] find a family that would feed him before using the bathroom [in the morning]. He totally would.

Did any of the stuff in this month’s Chewy.com care package help Bronson?

He absolutely loves his Frisco sherpa pet blanket! Surprisingly, this blanket has helped him burn some calories because anytime he lays on it, he can’t help but knead it.

Bronson’s absolute favorite toys, [from the package], are his Yeowww! catnip-filled toys and he is an [especially] super big fan of the Yeowww! catnip pollock toy that was sent. In our house, we refer to this toy as “the shark.”

Do you have a helpful tip of the month to encourage any pet owners that are dealing with feline obesity?

Keep your cat on a strict diet. We think diet is like 90 percent of him losing weight. We strongly feel like working to get your cat on wet food, if possible, would be the most important advice. We did a good amount of research and decided on a grain-free wet food diet by Weruva.

For treats, we use freeze-dried chicken, which is a healthy alternative to many other types of cat treats. I think a nice tip would be to be thoughtful when giving cats treats. Instead of giving them to a cat that’s begging, which can be an easy pattern to fall into, you should give cats treats to reward good behavior.

Since Bronson doesn’t exercise as much as a regular cat, all of his treats are given to him to promote activity. One of the biggest mistakes I’ve made was feeding Bronson in the middle of the night, and it cost us hours of lost sleep. Charm isn’t something Bronson lacks, and he knows that. He will sit directly in front of my face and purr as loud as he can and look down at me with a judge-y look on his face.

What are Bronson’s goals for February?

We’re going to schedule a visit with his vet the first week of February, get him on flea and tick medicine, and also, find out if we need to bring his weight loss goal down a bit to match his lighter body. Right now, our goal for February for Bronson is losing .7 to 1 pound, but that may change after his vet visit. Stay tuned!

The moment Lindsay started her career here at Chewy, she hit the ground running in customer service; she knew that this is the company she wanted to grow with from then on. When Lindsay isn’t spending her time writing for Pet Central, she’s most likely binge-watching a Netflix series and cuddling up with her 80-pound fur baby, Dexter.