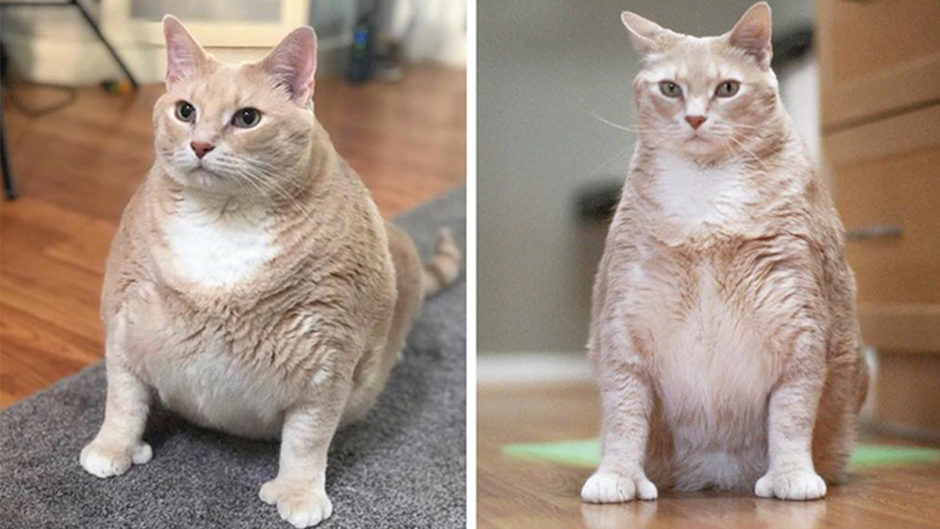 A year can make all the difference in someone’s life. Living proof of this is Bronson the cat.

This time last year, Bronson was severely overweight and living in an animal shelter. At 33 pounds, he was about three times the size of an average housecat. Now, one year later, he has a loving family and weighs in at a leaner 26 pounds. Though he still has several more pounds to shed before he reaches his goal weight, Bronson is already reaping the benefits of his healthier lifestyle.

“Bronson is like a brand-new cat,” says Mike Wilson, Bronson’s cat dad. “He has a new confidence about him, and it’s so rewarding to see.”

It’s all thanks to Mike and his wife, Megan, who adopted the large-and-in-charge cat from the Michigan Humane Society back in April 2018. They immediately put him on a weight-loss plan and started an Instagram account (@iambronsoncat) to shine a light on feline obesity. Since then, Bronson’s lost more than 7 pounds, and he’s become quite the Instagram star with more than 191,000 followers.

The biggest change Bronson’s parents have noticed over this last year is his increased energy level.

“He’s become more and more active and strong,” Mike says. “He’s up on his feet much more than when we first got him. For the first couple of months, Bronson would only stand up to use the litter box and to walk to his food. Even eating his food was done lying down.”

Mike also raves that four-year-old Bronson, who lives in Grand Rapids, Michigan, has been getting used to sharing his roof with the other cats at home.

When they first brought Bronson home, he immediately let the Wilsons’ other cats know not to mess with him or his food! But instead of fighting with his cat brothers like before, Bronson now just lightly swats at them whenever they come near him. It’s his way of saying “I love you,” explains Mike.

“The cats are also totally used to it to where they don’t even turn to look back or act like it even happened,” he says.

We’ve been keeping track of Bronson’s progress with monthly updates and sending him cat supplies to help with his journey. Below, Mike fills us in on how the month of April went for Bronson’s weight loss and reminisces about the past year with this character of a cat. With just under 6 pounds to go and a whole lot of energy, we have no doubt that Bronson will continue to shed the excess weight.

How much weight did Bronson lose this month?

What’s the most exciting milestone for Bronson this month?

We heard a noise in the kitchen and went in to find Bronson tossing a toy around by himself. This is really special to us because over the last year, we’ve been the ones needing to engage him in activities. It’s really great to see him with extra energy and also doing something where food isn’t the end goal.

What is one word you’d use to sum up your first year with Bronson and why?

We don’t feel that weight loss is typically very exciting, but we feel like Bronson’s unique personality and the lovable way about him makes it interesting and fun. “Majestic” comes to mind when I think of all of the breakthroughs he has had over the past year and the way he confidently carries himself around.

How has Bronson changed your life and others?

We’re thrilled to have him in our lives. His cute way of doing things and how he reacts to different situations makes us laugh every day. It’s really rewarding to see how much confidence and energy he’s gained.

Also knowing that he’s inspiring other people to be mindful of what and how they’re feeding their cats is really cool … he inspires us to stay more active and healthier.

Tell us more about how Bronson’s relationship with his brothers has changed for the better.

Bronson used to be very shy around the other cats and not play with them as much. Although he doesn’t really play with the other cats. Anytime a cat walks within reach and he swats at them, it’s Bronson’s way of telling him he loves them. Even when he does swat, it’s a very slow and weak swat, like he’s not even trying.

Does Bronson like to show off his progress to his brothers?

He’s been able to get on the [cat shelves], but he’s limited by how high he can go because there’s a hole on a shelf that he’s not able to fit through. So, he’s recently been lounging just under the shelf, and I believe he takes pleasure knowing that he’s hanging out where he’s been watching others play. It doesn’t seem like he minds that he’s only able to get part way up, because from that position, he can block cats from going up the wall. I think he believes that if he can be patient and wait to go up, then so can they.

We’ve been seeing him in the P.L.A.Y. cat teepee you guys sent him this month almost daily. I was thinking part of why he loved it was because it was so roomy, but over this past week, he’s started lying in the Frisco canopy bed that you got him a couple of months ago. It’s so funny because he barely fits in it, and the whole thing tilts sideways when he goes to lay down in it.

How does Bronson bribe you to bring out the treats?

Originally, when he went on the [cat shelves], we would give him treats, and so he also goes up there and hopes that we’re impressed enough with his climbing skills to reward him with treats.

He’s also turned our kitchen into the guilt zone. I’ve been in the kitchen maybe twice over the last month without Bronson beating me in there. It’s best to not make eye contact, because if you catch his eyes, he gives a disappointed look and starts meowing. Bronson knows his feeding times and about a half hour before our alarm goes off, his stomach starts aching and he lies with his fur in our face and purrs loudly.

Bronson’s always been into catnip toys, but he’s been especially into playing with them this month. His favorite brand is Yeowww! and if he needed to pick a favorite shape, it would be the Yeowww! banana. Someday we would like to get a bunch of catnip bananas and make him a throne like the one from “Game of Thrones.”

Bronson seems to be going outside more and more since getting on flea and tick meds. Is he starting to really enjoy it?

Since it’s been warm out, he’s been very happy with lounging and exploring outside. One of his favorite things ever is grass, so I think it might be the cat version of a kid walking through a strawberry patch.

One thing we’ve started doing is adding in green beans to his diet. He’s been a very hungry cat, so these have really helped fill him up.

Bronson’s parents sneak green beans into his wet cat food to help fill him up without all the extra calories. Courtesy of Mike and Megan Wilson

If anybody’s interested in trying this with their cat, please run it by your vet first and also be sure to use green beans with no sodium. We chop the green beans up very well, then mix a third of a cup of the green beans with every 3 ounces of wet food. I don’t believe Bronson would eat just a green bean, so we made sure to mix it very well with his wet food so that he would need to eat them to get to the food.

What are Bronson’s goals for May?

His weight loss is always first. Hopefully, he drops another .5 pounds.

We also really want Bronson to get warmed up to the car. This month has been a bit hectic, but in the next couple of weeks, we want to bring him out to the car while it’s parked and feed him treats or his meal there for positive reinforcement.

Another thing we want to do once it’s sunny and nice out is bring him down to the stream in our backyard and let him meet the ducks down there. I don’t have a clue if he would be scared or not, but we want to give him as many new experiences as we can, and I think the look on his face when he sees a group of ducks hanging out nearby could be priceless.