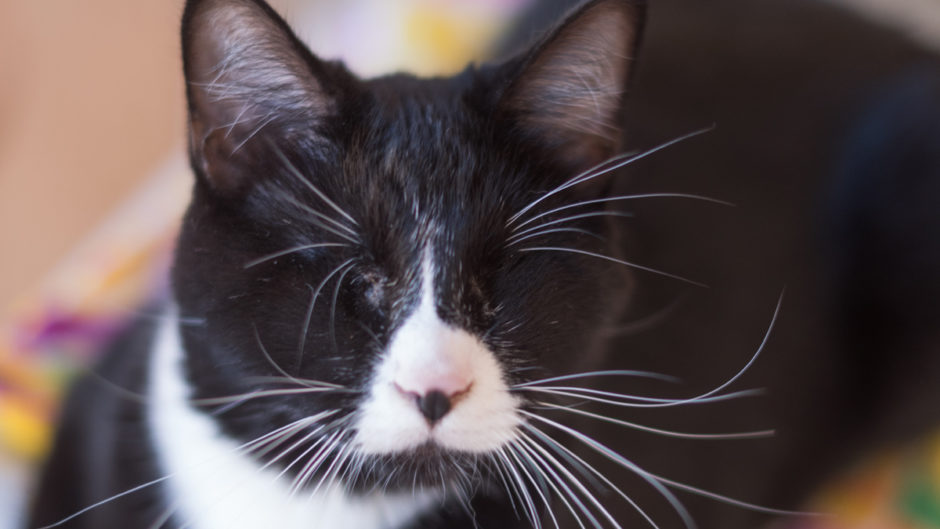 “It doesn’t matter if you’re missing something, you can still have a full life,” Connie says, “and all you have to do is want to do it.”

This was one of the lessons her special needs cats taught her in their three months together. A lesson, she said, that inspired her to encourage others the value of disabled pets.

“I’m drawn to special needs kitties. We think they need more help but they don’t necessarily,” she says. “[My] main goal is to make people aware [that] there is no difference.”

Connie recently adopted Petunia and Piper; a blind brother and sister who both had to have their eyes removed when they were just kittens. “They were found in a landfill. [They were] sick and had horrible eye infections,” she said. Connie already had one blind cat as a part of her pack at home, Blaze. She rescued him the day before he was going be put down, she drove 300 miles to go get him and never looked back.

Connie decided to adopt the siblings from the Best Friends Animal Sanctuary after getting word from her friend, who had tried adopting Piper (previously named Frito at the sanctuary) herself. The sanctuary made it clear that the two couldn’t be separated, and since the friend couldn’t care for two cats at a time, she called Connie. “There were plenty of people calling, but they wanted one or the other, and I said I’d take both,” says Connie.

The synergy of the pair is so astounding that it’s no wonder why the two had to be adopted as a package deal. “Piper watches out for Petunia,” she says. “Petunia is always getting herself into trouble, and he’s always coming to her rescue. He’s more timid.”

Connie explains that Petunia likes to go into her closet with bi-fold doors, and will often trap herself inside by accident. True to his loyal nature, Piper will lie outside the closet until Connie lets Petunia out. “If [Piper] hears a certain meow, he jumps right up to see if she’s okay, [and] he cleans her. [When] they hung around together in the landfill, he looked after her.”

Connie has no difficulties at all caring for her blind cats. When she brought Petunia and Piper home for the first time, she put them in a room by themselves, as she would with any new cat when acclimating them to a new home. “They were in there one day and they wanted out,” she says. As you would expect, Petunia was more anxious than Piper to escape the room and explore the other rooms.

Connie said it only took the duo a day or two to map out the whole house. “They found my screened-in porch and lanai right away. They love to be in the sun.” When it came to finding the litter box and cat bowls for the first time, Piper and Petunia had no issues whatsoever.

Even after owning the two cats for about three months, Connie still finds herself astonished by how easily they navigate her home and live just like normal cats. Despite the disability her three cats share, their blindness doesn’t prevent them from living life as any cat with sight would. “They amaze me every day,” she says.