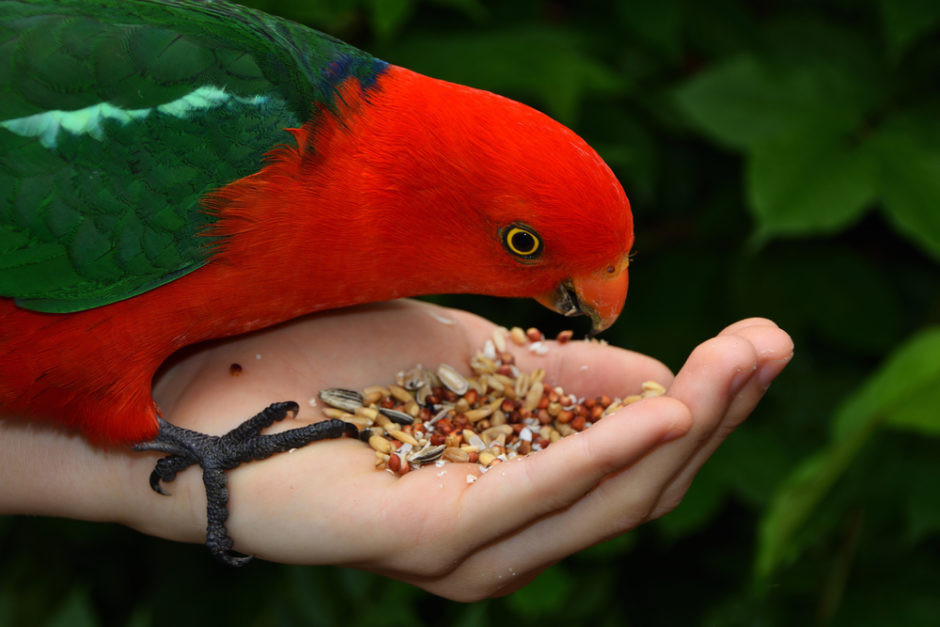 Over time, seeds lose nutrients through oxidation. For this reason, manufacturers generally put a two-year “shelf life” on their seed mix packages. That is usually noted with a “best when used by” date stamped on the bag. If a manufacturer packages the current year’s seed crop in nitrogen gas, they guarantee that the nutrients will meet the levels printed on the package as long as the seeds are eaten within two years of the pack date. Of course, Brent Weinman, president of Sun Seed located in Bowling Green, Ohio, noted, “if you feed your birds 3-year-old seed, it’s probably not going to hurt them, but the nutrient levels may have fallen below what our guarantee is.”

After two years, the embryo and the endosperm in the seeds have probably dried up and died. “If you feed dead seeds to your birds,” Jason Clinger, general manager of Topper Bird Ranch, a seed mix manufacturer in Lexington, North Carolina adds, “you’re basically just feeding them filler because there’s nothing nutritional left in them.”

What if you’ve just got a large bin filled with seed or if you buy bulk seed ?how can you know if those seeds are fresh? “Crack one of the seeds open, hull it if it’s got a hard shell like a sunflower, take the heart and squeeze on it,” Clinger suggested. “If the seed’s still good, you should get some oil out of it.”

Another way to tell if your seeds are alive is to sprout some of them. “Wrap up 20 of them in a wet paper towel, give it three to five days and keep the towel damp the whole time,” Weinman said. After that time, count the number of seeds that start to germinate. “If 16 seeds sprout, you have an 80 percent germination rate,” he said, “and that generally indicates that the seed mix is fresh.”

How Much Seed To Feed

The seed/pellet debate might leave some bird owners confused. “Seeds and pellets do not have to be an ‘either-or’ thing,” said Margaret A. Wissman, DVM, DABVP, Avian Practice. “You can offer both to your birds ?as long as they’re also eating their pellets. Seeds are only a problem when birds eat them to the exclusion of healthier food.”

That doesn’t mean a bird will eat both if offered a bowl of seed with a bowl of pellets. “Most birds will go straight to the seeds and fill up on that,” Clinger said.

Some bird owners offer seed as a treat, after pellets and vegetables have been consumed. They let their pets have a little seed in the evening, when they’re out on a playstand or while the family is eating dinner.

Larry Nemetz, DVM, a birds-only veterinarian in Santa Ana, California, suggests you give your bird seed only once or twice a day, with only 1 tablespoon given at a time: “That way, even if your bird eats his seeds first, he’ll still be hungry for his other food.”

You also might do what Gayle Soucek, a pet trade consultant in Illinois and author of The Parrot Breeder’s Answer Book (Barron’s, 2001), does. She feeds her birds a dish of seed once a week, and at that time, “they can eat seed to their heart’s content ?sort of like pizza night for my husband and me,” she said. During the other days of the week, her birds eat pellets, fruits and vegetables.

Exactly how much seed can or should be given varies considerably, depending on the species of bird and its weight and health. For example, a bird that is laying eggs may need a higher-fat diet that includes eating extra seed. On the other hand, an obese bird probably should eat very little, if any, seeds and certainly not any high-fat seeds.

Cockatoos and Amazons, which are prone to obesity and fatty tumors, should not be fed a seed-based diet or be allowed to eat a lot of high-fat seeds. African parrots also can become obese, and they tend to develop calcium deficiencies when fed a seed-only diet.

On the other hand, many people believe the smaller cage-bird species tend to do better when fed more seeds. “As a general rule, the droppings of parakeets and cockatiels aren’t formed as well when they’re on strictly pellets,” said Ted Lafeber, president of Lafeber Company based in Cornell, Illinois. In his experience, when these birds are provided with some seed in their diet, their gastrointestinal tract functions better.

In general, small birds like budgies, cockatiels, finches and canaries do well on a diet that is around 40 or 50 percent seed, Wissman added. This is provided they are not allowed to become obese and they receive a nutritious mix of other foods or supplements.

Certainly there is no “one size fits all” answer here. “One bird might do OK on a 40 percent seed diet, but another may have health problems if you feed that many seeds,” Wissman said. She suggested you consult with your veterinarian to find out what diet is ideal for your particular bird. Unless your bird is seriously overweight, chances are you’ll be told that it’s okay to feed him at least a few seeds now and then. “Seeds can be a fun, tasty and even nutritious part of a bird’s diet,” Wissman said. “The key is to not overdo it.”