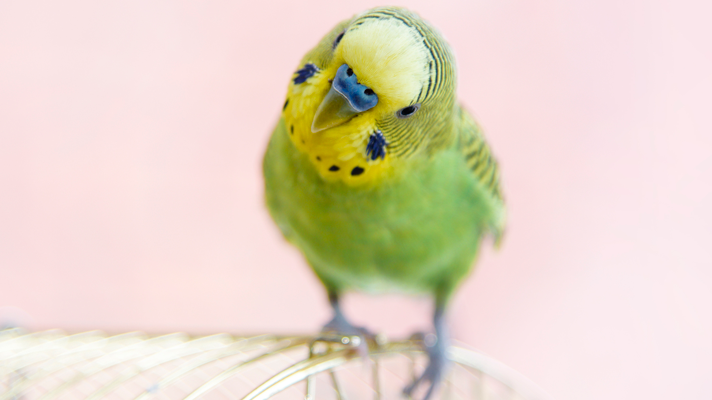 Long before pet birds and parrots learn human words, they communicate to us with body language. Like vocalizations, this comes naturally to parrots. Not only do they show moods, emotions and forthcoming behavior with the way they use their bodies — especially their feathers — parrots also learn to read human intentions by observing human postures. It’s not unusual for pet birds to know more about what their people say with their bodies than their people know about what the birds are saying with theirs.

Many parrots know that humans have a dominant hand — a hand we use more and are more adept with — before people notice that the bird has a dominant foot. For example, if the bird refuses to step onto a human’s hand or shows insecurity in doing so, sometimes the bird is exhibiting a preference to step up only onto a dominant hand.

In most of the cases I’ve seen in which a bird exhibits a preference for stepping up onto a particular hand, it is balking consistently at a left hand and stepping up dependably to a right hand. In more than eight out of 10 of these cases, the human reporting the bird’s behavior is right-hand dominant.

2. What A Parrot’s Posture Tells Us

Parrots show us how they are feeling and what they are going to do by using their bodies in different ways. Generally, a parrot with an upright stance and smooth feathers is wary or frightened. Loose, ruffly feathers generally indicate happiness. A bird sitting on one foot with feathers puffed out might not feel well or might just be sleeping in a cool room. A bird that has all feathers sticking as far out as possible, tail flared, with shoulders or wings held out from the body may be courting or getting ready to fight.

3. Your Parrot Will Warn You

It’s up to the human(s) interacting with the bird to prevent the bite when these signs appear. This might involve not putting a hand or body part within range of the bird’s bite, putting the bird down or making sure something else, such as a wooden toy, is between the bird’s beak and what it intends to bite.

A parrot that feels good will signal its health and happiness with its body. That might mean stretching as though it were doing Tai Chi, where the bird slowly extends one wing and one leg on the same side of the body, returns it to position, and then extends the other wing and leg on the other side of the body. It might stretch its wings up or out, maybe even returning them to their place against its back in a ritualistic, dance-like motion.

A bird that is happily greeting a friend — human or bird — might wag its tail or puff out all its feathers momentarily. A tail wag might also be the equivalent of a human “giggle.”

The parrot behavior of rapidly wagging the tail back and forth may be a remnant of something it felt when shaking water off its tail. The bird might be using it to express the sentiment that a happy occurrence has just passed and that it’s ready for another adventure.

If a bird has been meeting new people and there is concern that the people have been too forceful in their handling (this includes early Step-up training for a new or previously unhandled bird), then returning the bird to its perch and counting tail wags can give a good idea of whether or not the bird enjoyed the interactions.

If the bird wags its tail almost immediately after being put back on its perch, the new interactions were probably not too forceful. But if the bird does not wag its tail for several minutes or doesn’t wag its tail at all, nor puffs out its feathers or displays any happiness behaviors after being put down, then it is telling us that it should be handled in more passive ways in the future.

Some happy birds, especially cockatoos, wiggle their tongues or move their beaks up and down when they see someone or something they like. A happy, contented cockatoo might signal a desire to be petted by fanning the facial feathers over the beak and lowering its head to request petting. A happy, healthy Amazon parrot or macaw might signal an invitation to pet by turning the head upside down, exposing the jaw.

No matter which happiness behaviors we see — solicitations to be petted, beak chattering, tongue wiggling, stretches, tail wags or puff outs — if we are generally seeing more of them every day, then we can be assured that the bird’s training and adjustment are on a positive path.

Likewise, strutting around with feathers flared, combined with pinpoint, sometimes with wing flipping (quickly twitching the wing tightly against the body), solicitation (body flattened, wings slightly out, trembling, or shifting the weight from one foot to the other) are clearly signs of breeding-related stimulation. A parrot strutting around in courtship mode is more likely to be aggressive than peaceful if it encounters human hands or other intrusive body parts.

6. Trick Birds Will Play On You

Some parrots, especially mature cockatoos, Amazon parrots and African grey parrots, might learn to amuse themselves by playing tricks on humans with their body language. Such birds might give outward signs of friendliness and solicitation, then bite when they are approached with fingers. This can be very uncomfortable to the humans who got a big welcome and then are slashed and bleeding. If a person who knows that a bird does this warns you, take their word for it — some cockatoos can lie with their body language as adeptly as a faithless lover can lie with words.

Macaws, even very friendly ones, may enjoy fake “stabbing” when they meet new people even though they have no intention to bite. They do this apparently because they like to test people and see whether they will jump away.

A bird settling in for the night or for a nap, will stand on one foot, with the other foot pulled up inside its feathers, may fluff facial feathers over the beak (if it is a cockatoo), close or slightly close the eyes and grind its beak. This is a sign of contentment and, since birds are better behaved in all areas if they have enough rest, humans are best advised to allow their birds to rest — leave a resting bird in peace.