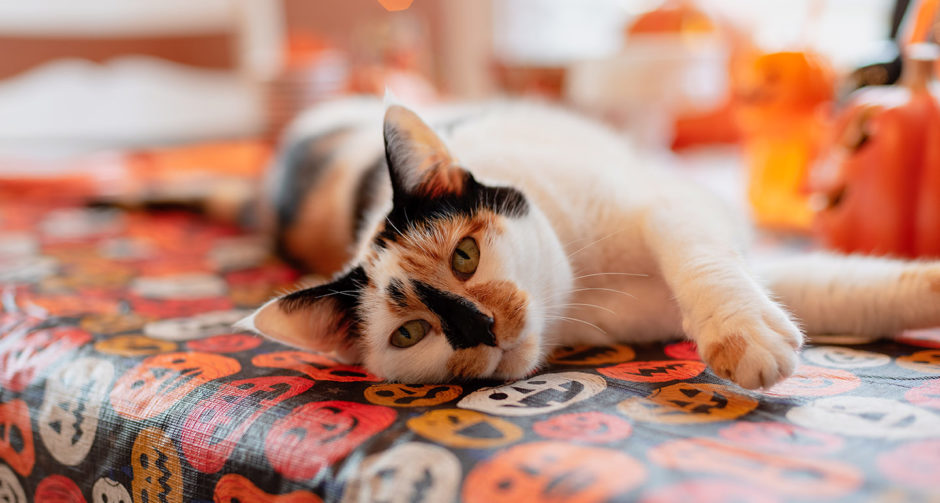 Aside from made-up monsters, the animal most associated with spooky season is your standard housecat. Picture a cat perched up on the ledge of a windowsill with a full moon illuminated in the background. All of a sudden, a witch flies by on her broomstick. So it’s natural to search for Halloween cat names for your newest furry family member.

Cats can seem like magical creatures who conjure up images of smoking cauldrons, flying witches and other superstitions. In reality, cats aren’t a curse or a bad omen; they’re sweet creatures who just want to occasionally cuddle and judge you from afar. Truthfully, everyone should have a cat or kitten by their side.

Did a four-legged friend walk into your life this fall? Are you searching for a whimsical name for your new furry companion? We’ve got you covered with a hearty list of 100 cat names inspired by your favorite holiday: Halloween.

Sure, this one is a bit basic but it’s straight to the point. You can even give your new pet the nickname “Hal” or “Weenie”—it’s a perfect Halloween cat name either way.

Pumpkins are sweet, round and plump—just like your new kitten will be after indulging in some cat-friendly Halloween treats.

Cut out a set of eye holes in an old bed sheet and voilà, you’ve got yourself a spooky costume—or a great new spooky cat name.

This name would be even more purr-fect if you found your new furry friend at a pumpkin patch! You can always pretend you did; we won’t tell anyone otherwise.

Be careful with this one—you might end up scaring your friends when all you’re really doing is yelling this spooky cat name across the room.

You wouldn’t want an actual cobweb lying around your house, but a cat named Cobweb is actually pretty cute in that dusty corner.

These creepy-crawlies lurk in dark corners all year round, but somehow they’re acceptable in October. 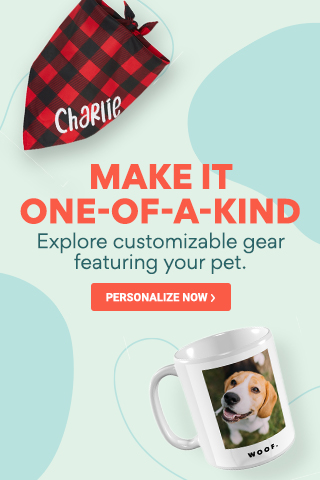 As in the green, gooey thing that oozes from a nearby ghost (or at least that’s what we’ve seen on TV).

Instead of writing it on a headstone, put this spooky cat name on your new cat’s collar.

Graveyards aren’t a great place for cats to hang out. Instead of letting your kitten frolic among the headstones, give them a rad new name like Stone.

This scary cat name is inspired by the electric bolts protruding from Frankenstein's monster’s neck.

Cats are really enchanting creatures, so why not name your new pet after magic wands and shooting stars?

This name is short for “cauldron,” a staple in any young witch or wizard’s kitchen. It’s also a nod to Ron Weasley in “Harry Potter,” which is a simply bewitching book and movie series.

Because having a cat in your life is simply magical.

As in the magic amulet your cat brought home from your neighborhood witch’s house. Naughty kitty.

Much like the moon, your new kitten will go through plenty of phases.

Maybe your most recent tarot card reading led you to finally adopt your new furry friend.

Mystics like to use crystals to connect with Mother Earth.

Vampire fangs are almost as dangerous as your cat’s teeth.

A spooky cat name inspired by things that go bump in the night.

Although harvest festivals typically take place in September, they pave the way for the spooky Halloween season.

Every good witch has a book full of charms and spells.

What makes up a skeleton.

As in the color of blood.

The spookiest time of the year.

Shadows cast a bit of darkness wherever they land, just like your black cat.

The time of day when the sky is black and spooky.

This scary cat name wouldn’t be fitting for a pet any color other than black.

This is the time just before night falls, making it an excellent Halloween name for black or gray cats.

That sweet in-between when it’s not quite nighttime and not quite daytime.

A seemingly innocuous cat name—until you reveal that Lucy is short for Lucifer.

Can’t have a list of Halloween cat names without a mention of the Devil.

As in the pointed tip of a witch’s hat.

Some believe it’s the hour when the veil between worlds is thinnest.

After the moon, which only comes out at night.

Just like all that smoke coming out of your cauldron while you brew your next potion.

As in jet black, a quite literal Halloween name for black cats.

Ravens are all-black birds with a tendency to appear in horror movies.

They say playing with a Ouija board can conjure up dark, evil spirits. Best to not toy with this game and just use it as a Halloween cat name for your black cat instead.

There’s nothing darker than the dark arts.

Perhaps the most famous vampire ever, Dracula is what nightmares are made of.

Frankenstein’s monster wouldn’t be who he was if it weren’t for the author herself, Mary Shelley, who penned the horror classic.

Let’s stay on the Frankenstein theme a bit longer. Doctor Frankenstein is a bit long, so instead give your pet this shortened Halloween cat name for the man who created a monster in his lair.

Or Frank, short for Frankenstein.

Because naming a cat “bat” would be a little nutty.

Banshees are ghosts, typically female, who come to warn of the impending death of a family member. You’ll know it’s a banshee because she’ll have a piercing scream.

A scary cat name taken from the creature whose eyes are a popular cauldron ingredient amongst witches, at least according to Shakespeare’s “Macbeth.”

In Jewish folklore, a golem is a creature created from mud and used to do the conjurer’s bidding.

These monsters have a female head and body but large bird wings and claws.

The creature who haunts the Loch Ness lake in Scotland.

Short for the monster Medusa who has snakes for hair and can turn people into stone with just one look.

Sirens are often associated with mermaids; however, where mermaids are sweet and approachable, you do not want to get caught listening to a siren’s song because that just might be the last thing you hear.

No, not the fizzy carbonated drink but the evil fairy.

Are they alive? Are they dead? One thing’s for sure: They’re great inspiration for a spooky cat name.

The male version of a witch.

Bobbing for apples is always a good time, just don’t put Apple the cat in a bucket of water.

What’s one thing that pairs perfectly with apples? Chocolate. Cover apples in chocolate for some festive and fun Halloween candy (but don’t give any to your cat because it can be toxic to them).

Cici is a unique twist on candy corn. Naming your pet after little nubbins of glucose is cuter when you turn it into an acronym.

Peanuts are so wonderfully versatile. You can’t go wrong incorporating peanuts or peanut butter into your Halloween party food.

You can’t have a scary-good cupcake without some flashy sprinkles.

Why not name your small kitten after one of the most popular bite-sized candies found in your trick-or-treat dish?

In prepackaged candies or smothering an apple, caramel is one of Halloween’s most essential flavors.

Apple picking is a favorite fall pastime. Once you have a bag of freshly picked Granny Smiths, nothing screams fall like making cider.

Much like the fluffy, pillowy confectionery, if your new cat or kitten is a snowy white color, Marshmallow is the perfect name for them.

Slather frosting on nearly anything and it’ll taste 100 percent better.

The pesky witches are up to no good with their witch’s brew.

The best kind of frosting in existence. No, it’s not up for debate.

As in soda pop, or popcorn.

After George A. Romero, the director of the 1978 cult classic zombie movie that launched a thousand zombie movies, “Dawn of the Dead.”

In 1976, author Anne Rice created a complicated and yet utterly fascinating vampire named Lestat. In 1994, audiences got to see Tom Cruise bring Lestat to life in “Interview with a Vampire.”

Actor, writer and director Quentin Tarantino is responsible for a favorite Halloween flick “From Dusk Till Dawn” (1996). And his characters from “Pulp Fiction” (1994) and “Kill Bill: Volume 1” (2003) and “Volume 2” (2004) are often turned into Halloween costumes.

Supermodel and TV personality Heidi Klum is basically the queen of Halloween, donning elaborate costumes each year. There’s likely not a soul out there who cherishes this holiday more than Heidi.

Let’s face it, your new cat or kitten is going to be the queen of the household now, so you might as well name her as such.

Don’t get lost in the Upside Down searching for a new cat name. Be inspired by “Stranger Things’” leading lady Eleven.

We’re hoping your new kitten doesn’t paint on a forced smile or grow up to be Batman’s arch nemesis, like this DC Comics character.

London in the late 1880s was haunted by a serial killer known only as Jack the Ripper. He was a pretty gruesome criminal with a fondness for tearing things apart. Hopefully, your new cat or kitten Ripper doesn’t rip apart the lining in your sofa cushion.

According to Norse mythology, Brunhilde is the daughter of Odin and a fierce warrior. Pronounced “broon-hilt,” it’s also a fun name to say.

The death of Czar Nicholas II of Russia’s mystic advisor Grigori Rasputin is the stuff of legends. To this day, how Rasputin died is shrouded in mystery. We’ll never truly know (unless you trust the Smithsonian, which claims the holy man died from a bullet to the head).

Cats know how to get in and out of tricky spaces. They disappear and reappear like magic—or like Houdini.

If you’re a fan of the CW’s long-running series “Supernatural,” this name will ring a few bells. Sam and Dean Winchester spend their lives fighting all sorts of monsters and demons.

If your new cat has big floppy ears, it’s totally appropriate to name them after the most faithful house elf in the Wizarding World, Dobby.

Netflix recently brought this friendly witch back to our television screens with the “Chilling Adventures of Sabrina.” Older fans will remember when Melissa Joan Hart played the young witch in “Sabrina the Teenage Witch” from 1996 to 2003.

Just like author J.K. Rowling describes Hermione Granger throughout the “Harry Potter” series, your new cat truly is the brightest witch her age.

This red-headed priestess was the chosen vessel through which the Lord of Light spoke in HBO’s “Game of Thrones.”

She’s the greatest vampire slayer of all time.

After the cat in everyone’s favorite Halloween movie, “Hocus Pocus.”

Perhaps you didn’t connect with any of the Halloween cat names on our list, and that’s OK. We suggest firing up that Netflix account—or maybe Disney+—and streaming your favorite scary movie to let inspiration take over. Whatever name you decide to give your new best friend, we’re sure it’ll be purr-fect. Happy spooky season!