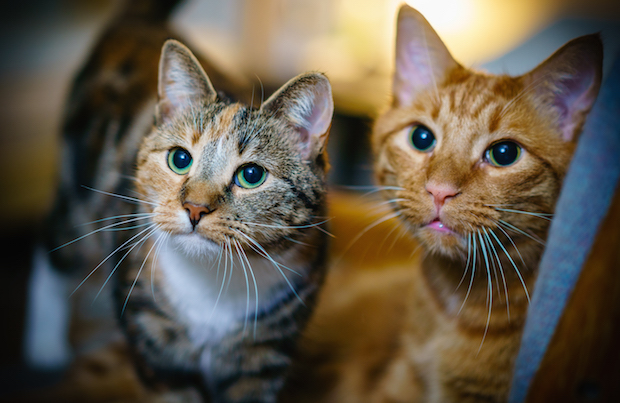 You’ve always assumed the calico cat that sits in your neighbor’s window is a she. And you’re certain that the orange tabby you’ve fallen in love with at the shelter is a boy. Chances are, you’re right. Most orange cats are male and most calicos are female.

The color of a cat’s coat is closely linked to its gender. As you may recall from high school biology, mammals have two chromosomes that determine their sex—XX for females and XY for males. But a number of additional chromosomes are present and vary depending upon species, says Dr. Robert Grahn, a forensic analyst at the veterinary genetics laboratory at the University of California in Davis.

“These other chromosomes contain genes that affect hair color, pattern, shape and length,” Grahn says. “Since the genes for sex and hair colors are on different chromosomes, they are inherited independently of each other. Thus, no color is associated with a particular sex, except in cats and hamsters.”

Nature doesn’t always abide by a rigid set of rules, however, including when it comes to feline fur color. A small percentage of orange cats are female, and even a more miniscule portion of calico cats are male.

Below, learn how genetics and sex influences a cat’s coat color, and why some cats don’t fit typical color patterns.

Color in Cats is (Mostly) Linked to Sex

Whether calico, tortoiseshell, orange, black, brown, or gray, a cat’s fur color is derived from two dominant colors: Black and red. These colors can mutate into different shades—black can become chocolate, cinnamon, lilac, blue and fawn. And red, which is determined by the orange gene, can become cream.

The color genes for black and red in cats are contained within the X chromosome. This is the same chromosome that, along with Y in males, determine a cat’s sex, says Dr. Jerold Bell, adjunct professor of genetics at Cummings School of Veterinary Medicine at Tufts University in North Grafton, Massachusetts.

“They are actually alleles, meaning they are two variations of the same gene in one location on the chromosome,” he says. So an X chromosome can contain either a black hair gene or an orange hair gene, but not both.

Males normally carry only one X chromosome. Therefore, males can be black or orange (or other color variations based on other gene locations) but cannot have both black and orange hair colors on their body. The female’s extra X chromosome allows the possibility of her receiving both a black and orange gene, says Bell.

Are All Orange Cats Male?

About 81 percent of orange cats are male, says Bell. While female cats will inherit an orange coat only if they carry the orange gene on both X chromosomes, if a male carries the orange gene at all, he will be orange, says Konecny.

Are All Calico Cats Female?

Calico cats have the same coloration as tortoiseshell ones, white orange and black blended together, but calicos have distinctly-marked patterns. According to Bell, research shows that fewer than 1 in 1,000 calico cats are male. This can be chalked up to the female’s extra X chromosome.

That extra X chromosome means a female can receive both a black and orange color gene, which gives rise to calico and tortoiseshell variations.

“Females with a black gene on one X chromosome and an orange gene on the other X chromosome will be calico or tortoiseshell colored,” says Bell.

So how can any male calicos exist at all? It’s mostly attributed to a mutation in the skin cells during formation of the embryo, says Bell.

If the mutation occurs early in the embryo, then the male can inherit the calico coloring, he says. If it occurs later in the development of the embryo, there may only be an occasional patch of black hair in an otherwise-orange coat. He says this phenomenon occurs only in the skin cells, and is not passed to the male’s sperm, so they can still reproduce as orange.

Another rare occurrence causing male cats to have a calico color pattern is called chimerism, the fusion of two fertilized eggs in the womb.

“These would have become two different kittens if they remained separate, but because they have fused, they become one kitten with two separate sets of cells containing different sets of chromosomes,” Bell says. “If one of the fertilized eggs was for an orange cat, and one was for a black cat, you could find equal amounts of black and orange in a male cat.”

“If one X chromosome carries the orange hair gene and one the black hair gene, then he will be a calico,” Bell says.

Paula Fitzsimmons is a freelance writer and researcher specializing in companion animal health and nutrition, and science. She’s written for clients like Prevention magazine, PetMD.com, PawCulture.com, Parrots magazine, and University of Texas-Arlington. She lives in Madison, Wisconsin with her husband and feathered family members, including parrots Whit and Sweetpea.