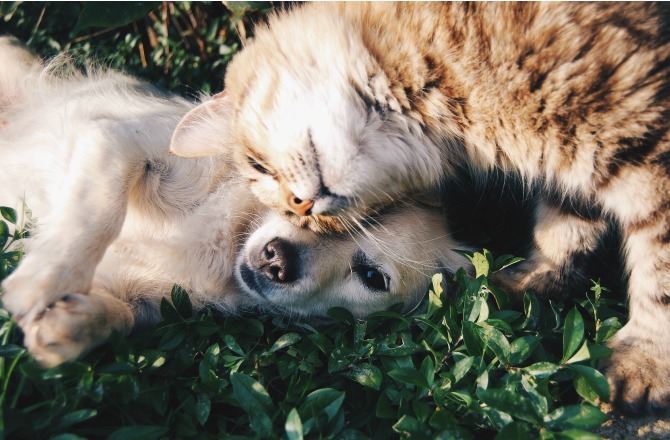 Dogs and cats are different in more ways than the obvious, from their behavior and social interactions to their metabolisms and physical traits. As a result, there are a number of instances in which they need to be treated differently from each other, including daily care and in emergency situations.

Here are some basic differences between cats and dogs and how they should be handled according to species:

While dog and cats can suffer from some of the same maladies, certain health issues are more common to each.

Dogs are also more likely to suffer from arthritis and other mobility impairments.

“Cats can, of course, injure themselves, but are naturally cautious and less likely to develop wear and tear on their joints,” Levy adds.

2. Dogs Can Be Vegetarians, But Cats Can’t

Dogs can be omnivores, while cats are strictly carnivores. Because cats cannot produce certain essential amino acids that are necessary for health, they must get them through diet.

“A few of those essential amino acids are only available in meat proteins—the two most necessary are taurine and arginine,” says Dr. Jeff Werber, a Los Angeles-based veterinarian and contributor to CBS’ “The Early Show” and “Sunday Morning.” “Taurine is necessary for eye health and healthy skin, and very important for heart health.”

Arginine is needed to produce ornithine, a different amino acid that binds to ammonia to make it non toxic to the body.

“Without it, ammonia build up can’t be neutralized, so it will become toxic to the cat,” says Werber. “Cats need a meat/fish diet to get their protein from animal sources [and] get these essential amino acids.”

Technically, cats can pant to cool themselves down like dogs, as they have sweat glands in their noses and pads of their feet that help with heat regulation.

“The reason we don’t see them pant nearly as often in dogs is they usually don’t exert themselves to the point of overheating,” says Werber. “They pace themselves better, and seem to read the changes in their body heat earlier than their canine counterparts, so they don’t overheat nearly as often.”

If you see your cat panting, it’s more likely due to a different reason such as stress or pain.

“Cats usually pant when they are stressed, rather than hot,” says Dr. Sarah Proctor, clinical assistant professor and director of the veterinary technology program at the Thompson School of Applied Science at University of New Hampshire.

Because dogs and mankind have evolved together, they have developed a very purposeful relationship over the generations, says Teena Patel, a certified dog trainer and the owner of University of Doglando. “We haven’t developed the same type of relationship with domesticated cats,” she adds.

In addition, dogs are pack animals and are highly social. As such, they like to assume a role in the family structure, Levy says, and readily respond (for the most part) to verbal commands and signals.

Cats, on the other hand, have a limited function as helpmates.

“They will hunt rodents, but not on command, although they may proudly bring you their prey,” says Levy. “And while dogs are usually predictable in their behavior, cats are more independent and ‘creative’ in their life skills.”

While this might come across as a little snobbish, the truth is that cats value their alone time more and don’t need constant reassurance of your presence in the way dogs do.

Cats can’t detect sweetness in food, while dogs have a wider palate and are thought to taste sweetness, says Proctor.

“Cats are built to eat prey and a mouse has very little carbohydrate and pretty much no sugar in its body when eaten by a cat, so the cat would have no evolutionary drive to maintain a taste for sweetness,” she says. “Since dogs’ diets are broader, the taste of sweet could be beneficial as the dog forages for varied types of foods.”

One positive thing about cats not liking sweets? Cats are not likely to get into your chocolate stash. Though veterinarians usually do not see chocolate toxicity in cats, chocolate can certainly be toxic to cats if they eat enough, Werber says.

“Dogs are more similar to humans than cats, so there are more human drugs that are safe for dogs than cats,” says Proctor. For example, cats have very little of a liver enzyme called glucuronyl transferase, which is required to break down Tylenol and other pain medications. “If the cat can’t break the drug down, it stays in the body and becomes toxic,” she says.

This is why a dog can handle acetaminophen (Tylenol) at low doses, but even a tiny dose of it can kill a cat. “Lillies are also very toxic to cats, but not for dogs,” adds Werber.

Learn more about which pain medications are and are not appropriate for dogs.

At a very basic levels, cats are hunters and dogs are scavengers. This affects the way they eat, catch prey, and interact with other animals.

“Dogs tend to be better scavengers, and as a result, they’re more resourceful in that sense,” says Patel. This may explain why dogs enjoy puzzles and search games, while cats prefer a toy they can pounce on. “Cats typically hunt to kill, with less focus on scavenging,” she adds.

Cats are prone to hepatic lipidosis, or fatty liver disease, when they take in fewer calories than they require for maintaining weight, according to Proctor. This is due to the cat’s unique liver metabolism, as cat livers are not built to efficiently convert fat into energy.

“If your overweight cat stops eating for any reason (illness, stress, etc.), his body starts breaking down fat stores for energy,” Proctor says. “In a normal weight cat or a dog, the liver converts the fat into energy and the animal loses weight in the process, but in an overweight cat, the fat breakdown happens too fast and there is too much fat going to the liver all at once.”

As fat accumulates in the liver cells, this can lead to liver cell damage and liver disease.

“This can happen if your cat loses weight too quickly, or if your cat gets another illness that makes him lose his appetite,” Proctor says. “It is also common in animal shelters where overweight cats are highly stressed and stop eating for days when they first arrive.”

The solution? Make sure your cat is getting enough calories in – which sometimes requires a feeding tube, since the cat won’t eat on his own.

9. Cats Don’t Care About Praise, Dogs Thrive on It

Here’s one myth you probably thought was true: cats are much harder to train than dogs. In fact, you can easily teach a cat to follow commands – that is, if you figure out what he really wants and offer that as a reward.

“It’s very possible to train a cat, you just have to choose the correct training methods for the animal,” says Patel. For a cat, that might mean a tasty treat they don’t get any other time.

One of the reasons most people believe dogs are easier to train is that humans have been doing it for centuries, so it simply feels more natural – plus, dogs love a pat on the head along with some “good boy” praise, while cats really don’t care as much.

“As a result, dogs may respond to food faster, because they’re inherently keen on responding to us humans based on our evolutionary history together,” Patel says.