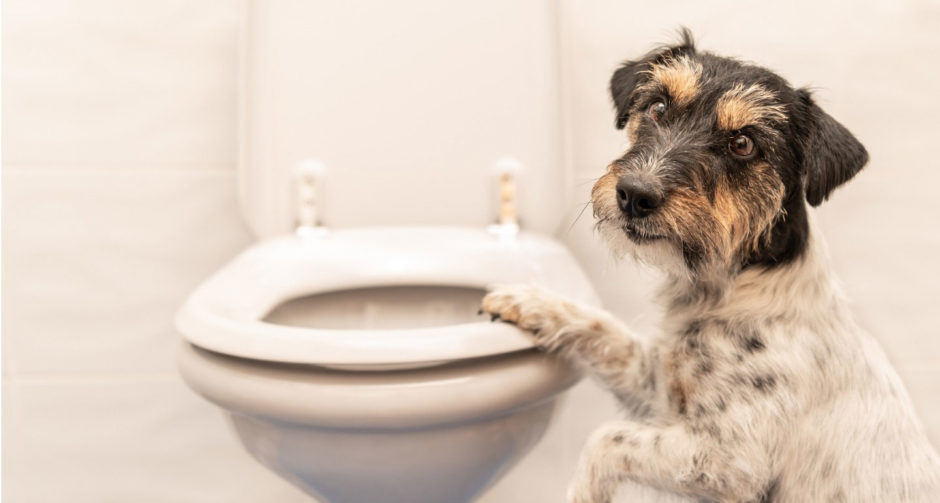 We adore our dogs. But sometimes, when receiving one of those big puppy kisses, we remember where their mouths have been. Yes, it’s true: Dogs are as gross as they are lovable. From snacking in the cat litter box to sniffing their friends’ unmentionables, our canine companions have some truly questionable habits.

What’s behind some of their less-charming behaviors? We asked the experts—even though in some cases, we’d rather not know.

Eating Their Own Poop

Coming in at No. 1 is a truly repulsive habit of some dogs: eating their own, ahem, poop. If you’ve observed this behavior, the good news is that you’re not alone— in a 2010 Colorado State University Study published in the Journal of Applied Companion Animal Behavior, researchers found that between 40.5 and 59.3 percent of participating dogs occasionally indulged in the habit.

The bad news? The behavior seems to be innate, harkening back to a time when dogs lived in the wild and eating stool was a way to keep the den tidy and control the spread of parasites. “Dogs want to keep their areas clean and will eat their own feces—a mama dog will eat her puppies’ feces, as well,” says Lisa L. Sickles, a certified dog behavior consultant.

As for discouraging the habit, Sickle recommends cleaning up any waste as soon as possible and making sure your dog has plenty of mental stimulation to prevent bored snacking. She also notes that this behavior is normal for puppies, but if you observe your adult dog suddenly eating his stool, a trip to your veterinarian is in order to rule out any underlying health problems.

Even the most dignified dogs can’t seem to resist the litter box buffet. What gives? This one is easy, unfortunately. “They’re dogs and cat poop is good, plain and simple,” says Sickle. “Management is key—put the litter box behind a baby gate that has a cat door so the cat can get by but not the dog.” The Carlson Pet Products Mini-Gate has a door that will let cats through, but keep larger dog breeds away from the box.

It’s also important to remember that, to a dog, mining in the litter box is a great game with a handsome reward (if cat food-flavored poop interests you, of course). Invest in some dog toys that contain treats to provide a less icky alternative.

Eating Their Own Vomit

It doesn’t matter how fast you clean it up, some dogs will immediately try to make vomit into another meal.

“Over the years, I have seen many dogs vomit and then quickly consume it,” says Camille King, a certified dog behavior consultant. “I believe that the dog can smell undigested food—high in protein and fat—in their vomit and be enticed to consume it.”

To prevent your dog from revisiting his vomit, King recommends teaching him a “leave it” command. To prevent the vomiting itself, try feeding your dog from a bowl specially designed to encourage slow eating, like the Outward Hound Fun Feeder, as scarfing down dinner can lead to that dinner resurfacing.

Dogs love to lick their wounds, hence the infamous “cone of shame.” While the behavior is off-putting, it may be helpful.

“There are thoughts that a dog’s saliva contains compounds that aid in healing—antibacterial and antiviral qualities, some that inhibit bacterial growth, others that are pain relievers,” says Sickle. “But too much licking can be a bad thing, so make sure that it’s done in moderation.”

As always, consult your veterinarian if your dog has an injury or sore—modern medicine offers much more effective treatments than saliva.

If you walked into a cocktail party and began sniffing rears, you’d be asked to leave. But for dogs, this is considered perfectly acceptable “getting to know you” behavior.

“Smelling the [genitals] of the animal is how dogs learn about each other,” says King. “They can smell each other’s pheromones, decide if a female is in season, pick up on adrenaline, understand if a male is intact, learn where another dog’s territory is located and more.”

Gross? Yes. But at least you know your pup has good social skills.

To some dogs, a smelly pile of leaves is more inviting than a feather-top mattress—a roll around in whatever is decomposing is all but irresistible. Your pup’s wild ancestors might be to blame for this off-putting habit.

“Some think that wolves would roll in something and take it back to the pack so that the others would know what to hunt for,” says Sickle. “Others think that dogs are masking their own scent.”

Then again, you could just have a fun-loving pup. “For some dogs, it’s just a life reward,” says Sickle. “Rolling in yucky stuff is fun.”

Drinking from the Toilet Bowl

Considering that dogs snack on cat litter and eat vomit, it might not be shocking that they’ll happily take a drink from the toilet bowl. Even so, it’s gross, and we had to ask: Is there something wrong with our dogs’ water bowls? Not likely, says King—the toilet’s water is simply colder, and dogs like a cool, refreshing drink as much as you do. Try cleaning and refilling his water bowl more often, and remember to put down the toilet lid.