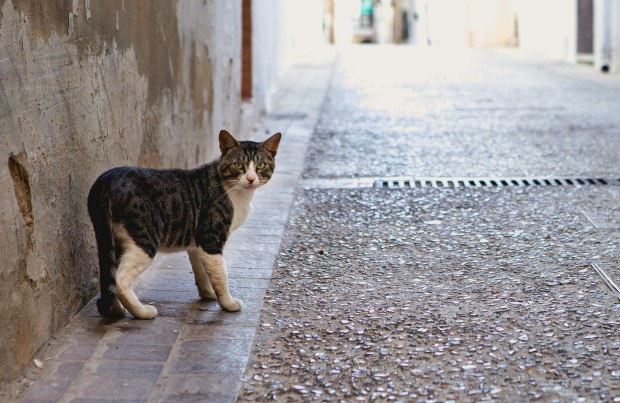 It’s a familiar sight in most neighborhoods: the outdoor cat. Perhaps you encounter them skittering across the street, materializing on your deck when you’re grilling, or yowling in the night during a heated cat-on-cat brawl. While some of these freewheeling neighborhood felines are simply pets roaming for the day, most fall into one of two categories—stray cats, who have been lost or abandoned, and feral cats, who are, to a certain extent, wild.

The Humane Society estimates that there are 30 to 40 million of these “community” cats living throughout the U.S. And while some neighborhood residents consider feral cats a nuisance, there are plenty of people and groups that implement Trap-Neuter-Return programs (TNR) that manage populations without harming the animals. These cat activists are trying to dispel the myth that feral felines are bad for communities. As the Maryland-based Alley Cat Allies points out, outdoor cats have coexisted with humans for at least 10,000 years, and they deserve the same protections as other wildlife.

We’ve compiled a list of common misconceptions about these neighborhood cats in an attempt to reverse the negative stereotypes.

Feral cats are a different species from domestic cats.

According to Becky Robinson, president and founder of Alley Cat Allies, many people don’t realize that the only difference between feral cats and domestic cats is the way they behave. “Cats have always lived outside,” she explains, “and in our country, cats are in urban settings and wild settings.” But these outdoor cats are still part of the domestic species, she notes. “‘Feral’ is just a behavioral description—they’re just not socialized.”

So how do you tell the difference between a feral cat and a pet that has strayed? It’s pretty easy, according to the ASPCA. Stray cats tend to rely on humans—living close to them, seeking cat food and exhibiting friendly behavior like meowing or rubbing against legs. Feral cats, on the other hand, are more elusive, avoiding human contact and living together in close-knit “colonies.”

Some people—especially non-cat-lovers—may fear the thought of cat colonies roaming their neighborhoods alongside their children and other pets. But there’s really nothing to fear, says Audrey Stratton, clinic supervisor at San Diego’s Feral Cat Coalition. “Unless they are forced into a situation they cannot escape from, feral cats generally avoid human interactions,” she says, adding that some can even become “friendly” toward caregivers who feed them. Robinson agrees. “These cats are absolutely not a danger,” she explains. “Even after veterinary care [through TNR programs], they remain in their colony site.”

Feral cats are equally unlikely to tangle with our beloved pets. A 2011 study published in Wildlife Managementfound that due to vastly different behavioral patterns, pets and feral cats rarely cross paths. Feral cats are nocturnal and more active in colder months, while owned cats are typically more active in the daytime and in warmer weather. “There are communities all over this country that are coexisting with colonies—families—of cats,” notes Robinson. “And they’re coexisting just fine.”

Just as people fear aggressive feral cats, they often worry about the spread of rabies or other common cat diseases. But according to the Centers for Disease Control, it’s actually quite rare for cats to spread diseases to humans, and even more rare when it comes to feral cats, who mostly avoid humans. “Feral cats really pose no threat to humans,” Stratton says, adding that “there have been no cases of rabies transmitted from cat to human” in her state of California, which has a significant feral cat population.

And while there is a possibility that feral cats could spread disease to stray or owned cats, Stratton notes that TNR programs throughout the country are minimizing this risk. Cats who have been spayed or neutered are less likely to fight with one another (a common method of spreading disease), and those treated at clinics like Stratton’s are even given a rabies vaccine.

Feral cats are pests that beg for food.

If you find a cat at your door mewling for a taste of dinner, odds are it’s a stray or pet cat, not a feral cat. According to Robinson, feral cats are more than capable of finding food without human interaction. “The way cats have always lived with us, starting 10,000 years ago, is because of agriculture—because there were food sources for them,” she explains. “It’s not really any different today. They’re living next to our dumpsters and our trash sites, and a lot of people don’t even know that they’re there.”

The aforementioned Wildlife Management study also notes that feral cats are excellent hunters, occupying far-ranging habitats and changing locations seasonally to find prey. Because they are fearful of humans, you can rest assured that they will keep their distance—unless, of course, you start leaving food out for them. Then, like any cat, they’ll be unable to resist.

If you find a feral cat, you should take it to a shelter.

When some people see an outdoor cat, the first reaction is to call the local animal shelter. But if the cat is exhibiting feral behaviors, a shelter is not a good idea. “People may not know that taking a cat to a shelter means it’s highly likely that they are going to be put down,” Robinson says. And even if the cat is not euthanized, the Humane Society notes that keeping a feral cat caged in a shelter, even briefly, can be stressful and damaging—not just for the cat in question, but for the shelter’s other animals.

A better option is to contact an organization that practices TNR, so the cat can be humanely captured, altered and monitored. “While living outdoors has its hardships, feral cats can live a good life,” Stratton says, particularly with “dedicated caregivers who TNR and provide fresh food and water.”

Feral cats can be adopted and kept as pets.

Some cat lovers who observe feral cats in their communities may have the impulse to try to socialize and adopt these cats. “If there are kittens,” Robinson notes, “we will typically socialize them and put them in homes.” But adult feral cats are usually too scared of humans to ever be kept as indoor pets.

Even though they don’t fit the description of your standard pet, many communities choose to welcome the presence of feral cats, treating them as a valued part of the neighborhood. “A lot of people enjoy having these cats around,” Robinson explains, citing an example of an Alley Cat Allies community in which children named the cats and thought of them as pets. “That interaction and that compassion extends beyond the cats that we have in our home,” she says. “There is such a power there that we need to recognize and embrace.”

Maura McAndrew is a freelance writer based in Oklahoma. She also writes for Paste Magazine and HelloGiggles.