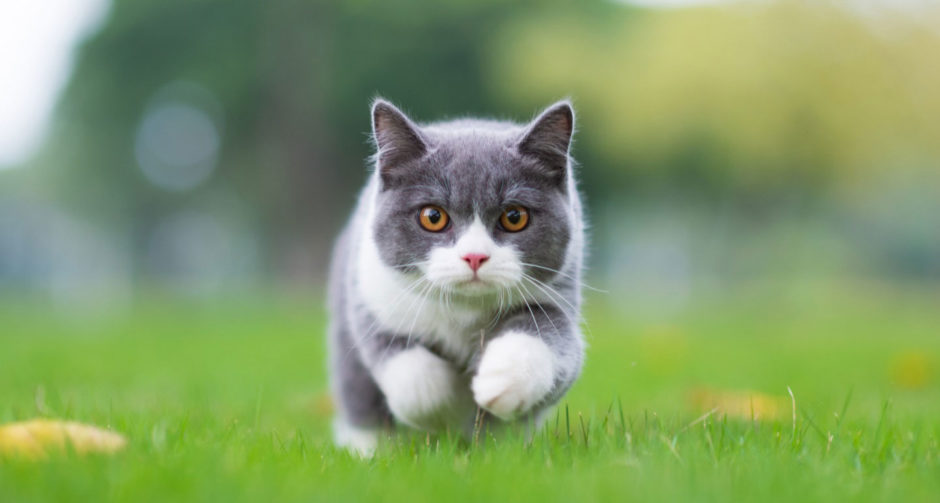 Cats dazzle us with their beauty, affection and cat-itude. But they are also delicate masterpieces of amazing anatomical abilities. Here are 10 crazy cat anatomy facts that you might not know:

Power of the Purr

Cats purr when they’re happy, as we stroke their chins or pop open a can of food. But cats also purr in times of stress– when they’re recovering from an injury, or at the vet’s office. Some cats purr so loudly during a checkup, the vet can’t clearly hear the cat’s heartbeat through his stethoscope.

Dr. Leslie Lyons at the University of California’s School of Veterinary Medicine, examined the mysteries of a cat’s purr in The Scientific American and suggests that that purring may even stimulate felines’ muscles and bones without expending a lot of energy.

Fascinated scientists have studied purring, describing it as the result of intermittent signaling by the diaphragmatic (diaphragm) and laryngeal (larynx or voice box) muscles, at a frequency of 25 to 150 Hertz (a Hertz is one cycle per second).

Research suggests that sound frequency of this range can promote healing and bone growth and veterinarians have noted that cats’ own broken bones heal quickly.

Tale of the Tail

A cat’s tail contains almost 10 percent of their bones and serves as a counterweight to keep that graceful balance while they navigate a narrow space or makes sudden turns. Besides working as a rudder, a cat’s tail is also a communications device that puts smartphones to shame. When relaxed, a cat’s tail gently sways, telling you they’re up for attention. Tail straight and high as a sailboat’s mast? That cat’s in charge and happy about it. If the tip quivers slightly, the cat might be irritated.

According to Marilyn Krieger, a certified cat behavior consultant, a cat’s wagging tail is nothing like the happy tail wag of a dog’s tail. A fast-thumping feline tail is “a good indicator that the cat is agitated and wants to be left alone,” she says.

The feline eye’s pupils are supersized—bigger than ours—and are controlled by two shutter-like ciliary muscles, which create that slit-like pupil seen in bright light. In the dark, light hitting feline eyes reflects off a mirrorlike membrane behind the retina called the tapetum lucidum.

A study at Cornell University explains how cats’ eyes work and why they glow in the dark.

When light enters a cat’s eyes, it goes through the retina, where light-sensor cells, called rods and cones, absorb it. The unabsorbed light reaches the tapetum lucidum, which bounces it back to the retina and lets it take in more light. Because of this, cats can function in the dark with only about one-sixth of the light we need. Who needs a lantern if you’ve got a handy tabby?

Like a radar guidance system, feline whiskers communicate details via nerve endings, which identify and analyze everything the cat touches. His whiskers are the same width as his body, telling him if he’ll be able to get through a narrow opening, or fit behind the TV set.

Pam Johnson-Bennett, a cat behaviorist since 1982 and author of “Think Like A Cat,” says whiskers are also sensitive to changes in air currents, which helps cats navigate. “She uses her whiskers in the dark the same way you would hold out your arms so your fingers could feel for objects,” she says. By knowing of changes in air pressure, says Johnson-Bennett, cats can avoid walking into obstacles.

A cat’s amazing tongue may be the busiest part of his body. You know how Fluffy’s sweet pink tongue feels during a loving lick on your hand: like a piece of Velcro or heavy-duty sandpaper. All felines, from teeny kittens to the largest jungle cats, boast tongues covered with miniscule hooks or barbs, which creates that rough texture.

Facing toward the cat’s throat, these little projections are important tools, working like a comb to help a cat groom his coat. The barbs snag flakes of loose fur, skin, dirt or fleas. And (yuck) cats swallow all this debris, which is usually dissolved by stomach acid. In the wild, these rasps also help tear the flesh off the bones of a cat’s prey.

Do You Hear What I Hear?

Amazingly, your cat’s hearing is superior to your dog’s! Cats can hear in the upper ranges of sound, from 45 to 60,000 Hertz (humans hear 20 to 20,000.). Dolphins, whales and bats all top cats’ hearing skill, but feline ears are still superior for detecting prey or a wandering kitten squeaking for its mother.

“A high-pitched call to a cat has more effect than a low pitch,” according to Drew Weigner, DVM, a specialist in feline practice. But Weigner says the cat’s response may depend on how sleepy (or how cooperative!) the cat feels.

Feline ears are complex. The outer ear consists of the pointy, standing-up part called the pinna—which can rotate 180 degrees while collecting info–and the ear canal; the middle ear has the eardrum and small auditory bones; and the inner ear has canals to regulate balance and the organ for hearing. Cats can pinpoint the direction of sound from eight meters to within eight centimeters—so your cat can definitely hear you calling, even if she’s not answering.

Cats’ coats, whether lush and long-haired or fuzzy domestic-short, are the purrfect fashion attire for every season. Aided by their ever-busy tongues, feline coats are the key to kitty comfort. Cats busily lick their coats not only to keep clean, but to regulate their body temperatures. By fluffing up their fur in winter and scouring it with saliva to keep cool in summer, cats can stay comfortable without putting on a sweater or tank top. (Boost your cat’s coat condition with regular combing to speed removal of old hair and growth of the new.)

Unique in the cat world, calico cats (and companion tortoiseshells) have a coloration tied to a genetic code. Female cats, with two X chromosomes, can display two colors, such as rust and black, along with white, which is separately coded. But male cats only have one X and one Y chromosome, so they cannot show more than two colors including white. In the extremely rare cases of male calicos or tortoiseshells, those boys born with an extra X chromosome are sterile.

Calico coating may even help the battle against human obesity. A study at the University of California San Francisco is examining how the calico’s orange and black genes work to create the patchwork effect, to see which genes might be ‘turned off’ and whether traits such as obesity can be inherited.

The myth that falling cats always land on their feet is rooted in an aerodynamic truth.

The body of a falling cat will work to correct its course, reflexively positioning his feet to hit ground first. Thanks to that feline inner ear’s vestibular system, a cat’s body senses whether it is upside down and how far from the ground. His head swivels forward, directed to rotate by his eyes and ears. Cats’ extra vertebrae (32 to our 24) and flexible backbones help get paws tucked under, with front paws poised to protect his face. Parachute-like, a cat’s body relaxes and spreads for landing. But the distance of a cat’s fall determines how well he lands or how badly he is injured when his legs absorb the shock. For feline safety, double screen windows and prevent your cat from testing that aerodynamic instinct.

A cat’s nails, or claws, are as unique and fascinating as felines themselves. Feline claws are “protractile,” or extendable, letting cats take a tiny slash, or reach out for the big touch. According to the ASPCA, claws are also key to social signaling: cats claw surfaces to let other cats know the spots they frequent. She will care for her claws by sharpening them against coarse materials, as well as extending them while playing, skillfully inhibiting the precision of those paw swipes. Because feline claws grow in layers, the outer parts can become frayed. Cats gnaw at that outer portion, chipping away at the ragged, worn sections till it comes away, like a tiny shell, revealing the new growth underneath.

With patience and the right tools, you can trim your cat’s claws, always taking care not to upset her or to trim too close to the ‘quick,’ the pinkish part that carries nerves and blood vessels.