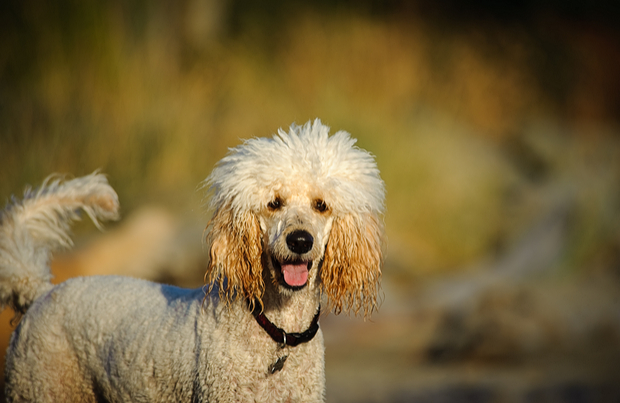 About the Standard Poodle Dog Breed

Although the Standard Poodle is often recognized for its performance in dog shows, it was originally bred as a water retrieval dog. Today we can also say that it is a wonderful companion.

The Standard Poodles is large with a well-proportioned build and long straight legs. Its head is triangular with a long muzzle and its ears are long and dropped.

The Standard Poodle is most commonly seen in white, apricot, black, blue, cream, silver or gray.

The coat of a Standard Poodle is curly and dense. It is also generally clipped and groomed regularly; otherwise the will twist on itself causing cords.

The Standard Poodle can appear to be standoffish around strangers, even barking at them when feeling threatened.

The Standard Poodle fares well in the city or country.

The Standard Poodle required regular grooming. Socialization with children at a young age is also recommended.

The following conditions are commonly seen in Standard Poodles:

The earliest ancestors of the Poodle were said to be curly-coated dogs of central Asia, but it is also identified with France. Many rough-coated water dogs are also associated with the dog’s ancestry. The earliest dog breed of this group was the Barbet, a type of curly-coated dog, which was seen in Hungary, France and Russia. However, the German strain of the dog exerted maximum influence on the Poodle we know today. The German word pudel, meaning to splash or puddle, is the source for the Poodle’s name and reflects its water abilities. The famous Poodle cut that is seen today has not changed much since the 18th century. This haircut actually holds a purpose; it was thought that it made the Poodle more buoyant when it was retrieving in water.

In France, the dog was also named chien canard or caniche, indicating its duck-hunting qualities. Therefore, from its water and herding roots, it became an excellent water-hunting companion. It was also used as a guide dog, guard dog, military dog, circus performer and wagon puller for entertainers. Its coat was clipped to help it swim, but was left sufficiently long on the chest to keep in warm in cold water. Some believe that puffs of hair surrounding the tail tip and leg joints were meant for protection during hunting, but stronger evidence implies that it started as an adornment during the dog’s performing days.

Fashionable women in France carried poodles as elegant companions, as did the French aristocracy, making it the official national dog. The typical clip of the poodle was accentuated in France, and there was a concerted effort by poodle fanciers to perfect the smaller varieties. In the late 19th century, poodles gained access to the show ring. Some early show dogs had corded coats which had long matted or thin tresses, instead of well-brushed coats. This made the poodles look very impressive. But as a style, it was difficult to maintain and the trend ended in the early 1900s.

Soon, the bouffant styles replaced it and became fashionable. However, the popularity of the Standard Poodle waned in the United States and by the 1920s, North America hardly had any dog of this breed. The Standard Poodle made a successful comeback after a decade or so, now becoming one of the most popular dogs in the U.S.