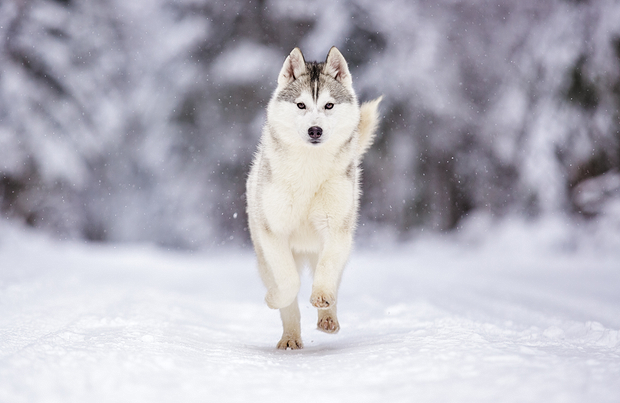 About the Siberian Husky Dog Breed

The Siberian Husky was bred about 3,000 years ago by the nomadic Indian tribe Chukchi for the purpose of sledding. It was first brought to North America by fur traders around the turn of the 20th century. Today the breed serves both as an sled dog and a wonderful pet.

The Siberian Husky is a medium-sized dog with a strong build. Its head is triangular with a long muzzle and erect ears, and its eyes can be seen in a stunning blue, brown or combination of both.

The breed has a medium to long outercoat that is smooth and soft dense undercoat.

The Siberian Husky enjoys to play and run. It is good with other dogs and gentle and loving with kids.

The Siberian Husky can sometimes be difficult to train and may need professional help. If left alone for too long, it may howl and may become destructive. It is typically not considered an ideal first pet.

The Siberian Husky fares the best in the country or in the suburbs if it has plenty of room to roam in a fenced area.

The following conditions are commonly seen in Siberian Huskies:

The Chukchis, a semi-nomadic people of northeastern Asia, are responsible for developing the Siberian Husky. And though the breed’s lineage remains a mystery, the Husky is probably of spitz stock, taking several centuries for the Chukchis to train them as sledge dogs. Famously used during the Alaskan gold rush, the Siberian Husky was an essential laborer in the Arctic regions, later emerging as the primary breed used in dog racing, a popular form of entertainment in these regions.

One such racing event, the 400-mile All Alaska Sweepstakes Race from Nome to Candle, traversed some of Alaska’s most arduous areas. During the second annual All Alaska’s Sweepstakes Race in 1909, the first team of Siberian Chukchi huskies were entered. Because of their docile nature and small size, the dogs were hardly acknowledged as worthy competitors.

However, a young Scotsman named Charles Fox Maule Ramsay took notice of the breed and had his team’s lead rider, John “Iron Man” Johnson, use them to pull his sled in the 1910 All Alaska Sweepstakes race, defeating his competitors handily. Johnson and his huskies still hold the race’s fastest finish time of 74:14:37. Ramsay’s other teams, which were also led by Siberian Huskies, assumed the second and fourth positions in the race, further evidence of the breed’s dominance in the sport. For the next decade, the Siberian Husky was used to capture some of the most prestigious racing titles in Alaska, especially where the rugged terrain was suited to the breed’s endurance capability.

In 1925, the city of Nome, Alaska was stricken by a diphtheria epidemic and supplies of its antitioxin were urgently needed. In what came to be known as the “Great Race of Mercy,” 20 mushers (human riders) and 150 sled dogs transported the diphtheria antitioxin 674 miles across Alaska in a record-breaking five and a half days, thus saving the city of Nome and its surrounding communities. Instantly, the mushers and their dogs became famous across the United States for their bravery and heroics. Balto, the lead sled dog on the final stretch into Nome and a Siberian Husky, would particularly gain publicity for the serum run and a statue was erected in New York City’s Central Park just 10 months after Balto’s arrival in Nome.

The breed’s popularity soon spread into Canada and in 1930, the American Kennel Club officially recognized the breed. Several Siberian Huskies would later serve in the U.S. Army’s Arctic Search and Rescue Unit during World War II. The breed continues to astonish racing fanciers with its speed and endurance, but has also become quite a popular show dog and family pet.