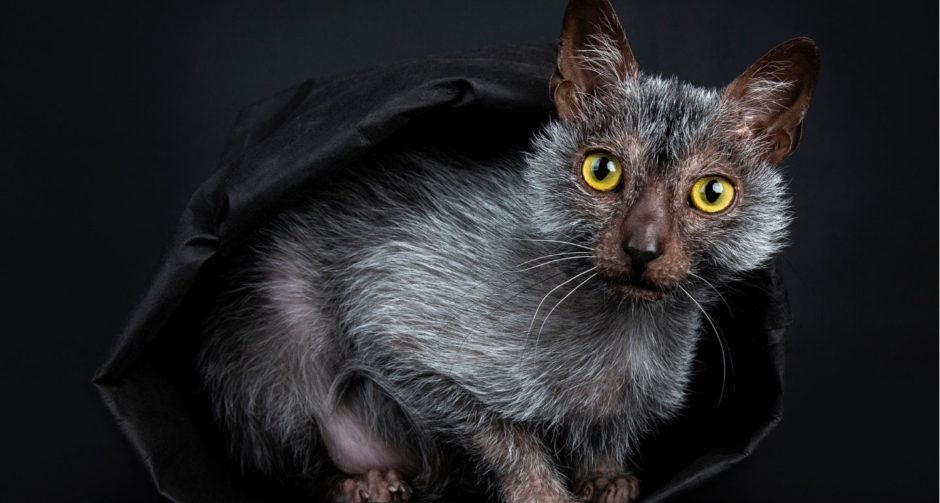 If you’re interested in fantasy (think “Harry Potter”) or have an affinity for horror films, there’s a good chance you’ve pondered what it would be like to come across a magical, mythical creature in real life. For some of us, that dream may be closer to a reality than we think.

Meet the Lykoi cat: a relatively new breed that’s been making a splash on the web for its striking and slightly spooky resemblance to a werewolf. With its dark, scraggly coat and nearly hairless face and paws, the Lykoi’s presence in the home could certainly make it feel like Halloween year-round.

What is a Lykoi Cat?

Developed from a gene mutation in domestic shorthair cats, the Lykoi is reported to be the first type of cat specifically bred for its unusual features—a thin, single coat and little to no hair around the nose, eyes, underbelly and paws. This specific trait, though found naturally in some cats, had not been purposely bred until Brittney and Johnny Gobble, a veterinarian and practiced breeder, began developing the Lykoi. According to their website, the Gobbles founding cats came from two unrelated litters with the same physical appearance. Kittens from both litters had their DNA, skin and hearts tested by UC Davis geneticists, dermatologists at the University of Tennessee and the Gobble’s cardiologist and, after testing negative for the Sphynx/Devon gene (a gene that gives these breeds their wavy coats) and proving to be in good health, the Lykoi breeding program was born.

In the end, their website says, it was determined that the breed’s unusual hair pattern—in which some of the hair follicles lack the necessary components required to create hair—does not come from a known disease or disorder and is a true natural mutation. The name for the breed, Lykoi, is loosely derived from the Greek phrase meaning “Wolf Cat” and The International Cat Association (TICA) officially recognized the breed in 2012.

The Lykoi breed, like many other well-known cat breeds, is not considered “designer” nor is it a “genetically modified” animal, says Joan Miller, chair of outreach and education and all breed emeritus judge for the Cat Fancier’s Association.

The Lykoi, it appears, falls into the latter category of these natural gene mutations. Genetically modified breeds are a result of human manipulation of an animal’s genetic material and are generally not considered to be ethical or healthy for a cat and its future breeding line, Miller said. The term “designer breed” is meaningless in the cat world and is derived from dog breeders purposefully mating purebred dogs for mixed breeds (like Cockapoos and Labradoodles). While purity is highly valued in certain dog circles, cat breeders often must include outcrossing with other breeds to maintain genetic diversity and avoid health concerns of their breeds.

“The use of the ‘designer breed’ term is not appropriate in the pedigreed cat world,” Miller said. “Hybrid breeds—like the Oriental and Ocicat—are just as valued as natural breeds, which do not allow outcrossing. The CFA has accepted many breeds that started with natural mutations … [and] I see this Lykoi cat as being no different from other coat mutations.”

The Future of the “Werewolf Cat”

While some potential pet parents may be clambering for their chance to bring home one of these werewolf-looking cats, no Lykoi kittens will be finding new homes just yet. The founding Lykoi cats (and their subsequent outcrossing with black domestic cats) are being bred at the Gobbles’ cattery in Tennessee and the couple has placed Lykoi with breeders in the USA, Canada and France to further the program, according to their Facebook page. Once the breeding pool is larger and the current breeders have confirmed that the Lykoi gene doesn’t carry any unexpected genetic defects in the long-term, the Gobbles hope to reach full Championship status with the TICA (the breed currently has a Preliminary New Breed status) and have kittens available regularly in 2016.