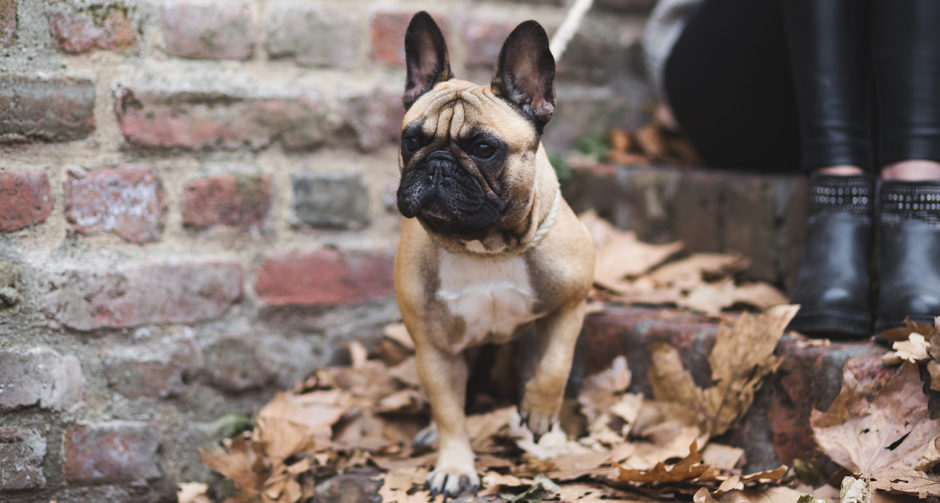 The French Bulldog is a nearly irresistible charmer. This playful, friendly pup is the perfect companion, whether you’re a single person living in a studio in the middle of New York City or the head of a large family with little ones under 5 and a backyard with plenty of space to run around.

Besides that endearing French Bulldog personality, Frenchies, with their adorable bat-like ears, are beyond cute. They don’t bark much, but they do snore, which just adds to their adorable appeal. No wonder they are such popular pets!

Unbelievable but true: The French Bulldog origin lies in England. Their ancestors were a type of toy Bulldog beloved by lace makers in Nottingham. When lace-making factories put these artisanal British lace makers out of business, they went to France and took their small Bulldogs with them. Fast forward a few decades, and the French Bulldog, now crossed with other small dogs like Pugs, became the cute, bat-eared pup we know today.

By the end of the 19th century, Frenchies became very popular throughout Europe. Royals like Tsar Nicholas’ daughter Tatiana owned one. You could find French Bulldogs hanging out in the Moulin Rouge dance halls and nightclubs in Paris, where French painters Henri de Toulouse-Lautrec and Edgar Degas immortalized them on canvas.

Americans fell in love with French Bulldogs around this time, too. Although they experienced a dip in popularity until the 1980s, they’ve been turning up on AKC’s popular breed list for the past 10 years. Now they rank No. 4, beloved by such celebs as Reese Witherspoon, the Rock and Lady Gaga. As far as what French bulldogs were bred for, the answer is for nothing more than companionship—which they excel at!

The first thing you notice about Frenchies is their ears. They’re known as bat ears, being broad at the base and pointed. They have large heads with pushed-in snouts (a typical Bulldog face), which can make it harder for them to breathe, especially in the summer heat. Their eyes, which tend to be dark brown, are round, but not bulging. Their noses are black.

French Bulldogs have short, round bodies with broad chests. They have thick necks, with some loose skin at their throats, and the skin around their heads and shoulders is soft and loose, creating wrinkles there. They also have short, muscular legs. And yes, French Bulldogs have tails, which usually are short, and thick and either screwed or straight. They’re born that way! 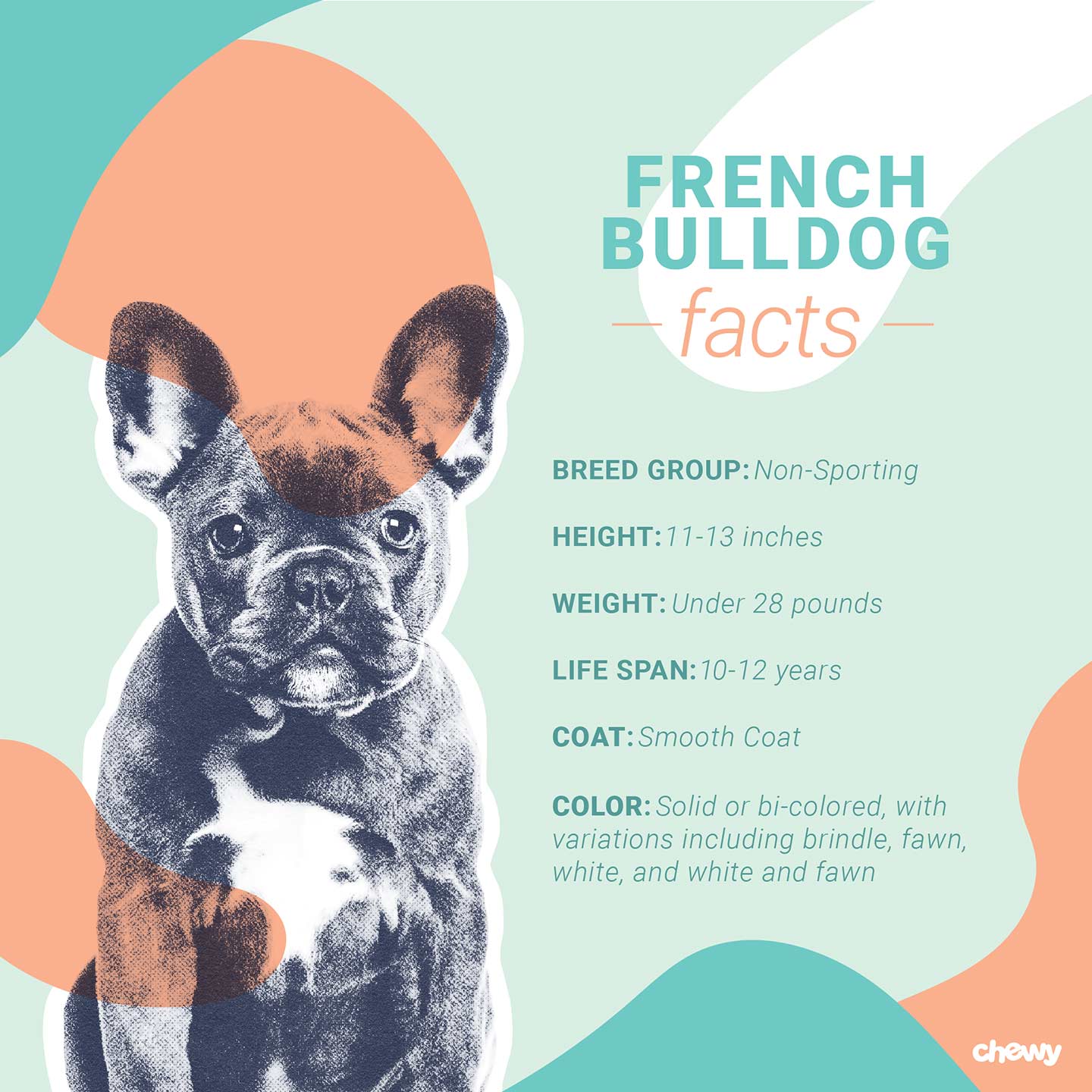 French Bulldogs are sociable, entertaining dogs who tend to like everyone they meet. They can get a bit too attached at times, in fact, so if you spend long hours away from home, it’s recommended you look elsewhere for a new dog.

The French Bulldog temperament tends to be outgoing and affectionate. While some French Bulldogs will simply follow you around everywhere and quietly wait for you to pay attention to them, others can be a bit pushy. You might catch French Bulldogs barking for attention, barking when they want a toy or barking at dinner time. Make sure to ignore inappropriate barking from the start, rather than giving into it and creating an annoying behavior pattern. They also are prone to snoring, which can be cute or annoying, depending on the situation. It’s also important to know that some French Bulldogs are great with cats and other dogs, while others are not.

Always practice caution and make an effort to appropriately introduce a new dog to any resident pets.

Unfortunately, French Bulldogs are prone to more than their fair share of health problems. These can be minimized by ensuring that any breeder you work with is dedicated to improving the health of the breed. Before purchasing a Frenchie, ask about health problems that are present in the dog’s lineage and the results of any genetic or other tests that have been performed on your potential dog or their parents. Alternatively, you can ask your chosen French Bulldog rescue or local animal shelter for as much of the dog’s medical history as they are able to provide.

Here are six of the most common French Bulldog health issues:

All dogs with flat faces, including French Bulldogs, have a degree of brachycephalic airway syndrome (BOAS), which is characterized by some combination of the following anatomic abnormalities:

The typical symptoms of BOAS include noisy breathing, working harder than normal to breathe, difficulty exercising, a tendency to overheat and gagging. In severe cases, dogs may collapse due to low blood oxygen levels.

Frenchies are prone to allergies—usually to environmental triggers like pollen, mold and house mites, but food allergies are possible as well. The most common symptoms of allergies in dogs, regardless of the trigger, are itchiness and ear and skin infections that might resolve with treatment but return with time. Gastrointestinal problems also can be seen with food allergies.

Learn more about the causes, symptoms and treatments of dog allergies here.

Those cute wrinkles around a French Bulldog’s face are a breeding ground for bacteria. Unless you keep them clean and dry, infections can occur.

French Bulldogs are prone to a long list of eye problems including:

Disorders of the spine, including malformed vertebrae and intervertebral disk disease (IVDD), are relatively common in French Bulldogs. Both conditions can cause pain, hind-end weakness or paralysis and difficulty urinating and defecating.

French Bulldogs are at relatively high risk for hip dysplasia—a degenerative condition affecting one or both hips that leads to arthritis. Patellar luxation (a kneecap that slips out of its normal groove) also is quite common. Dogs with mild patellar luxation may hold up the affected leg for a stride or two, but severe cases can require surgery to correct to enable the dog to walk without pain.

Caring for Your French Bulldog

In addition to the basic care that all dogs require, Frenchies benefit from specific types of attention. With the proper care, the average French Bulldog life span can reach 10 to 12 years.

French Bulldogs need to be brushed regularly with a soft brush like the JW Pet Gripsoft Bristle Brush and bathed as needed (but not usually more than monthly) to keep them clean. Their wrinkles may need to be cleaned a few times a week using an antiseptic wipe, like a Pet MD Chlorhexidine Antiseptic Dog Wipes, to prevent bacterial growth and infection. As with any dog, nails should be trimmed regularly and teeth should be brushed every day.

Learn how to brush your dog’s teeth here.

Do French Bulldogs shed? Yes, but not excessively. While not a shed-free breed, their short hair means minimal problems with shedding.

And if you’re concerned about French Bulldog drool, keep in mind that not every Frenchie drools. While some do, it isn't an issue for other pups.

Because many French Bulldogs can’t get a lot of exercise due to their respiratory difficulties, they can be prone to obesity. A high-quality diet that is not too calorie-rich is best.

This breed also tends to be a gassy, which sometimes can be improved by choosing a nutritionally complete and balanced food designed for sensitive tummies, like Hill's Science Diet Adult Sensitive Stomach & Skin Small & Mini Breed Dry Dog Food.

As for how much dog food you should feed a French Bulldog, know that the amount of food you feed depends on the food itself and your pet’s caloric needs. Your veterinarian can help you determine how many calories your dog needs based on their current body weight, activity level and other factors. Then feed the amount of your chosen dog food that provides the recommended number of calories over the course of the day. You might consider breaking it up into three meals to help reduce gassiness.

French Bulldogs exercise needs are not excessive. In fact, Frenchies often can’t handle an exorbitant amount of exercise. Watch your Frenchie closely for breathing problems and/or overheating during exercise. Note that, unless very closely supervised, swimming isn’t a great activity to get a French Bulldog moving as their bulky front end, short legs and smushed face makes a French Bulldog swim session especially difficult and tiring for them.

French Bulldogs are smart and can quickly figure out how to bend the rules if you let them. Be consistent in how you do things (e.g., whether the dog is allowed on furniture or must sit before you put down the food bowl, etc.). Some French Bulldogs also demand bark, as mentioned earlier.

When it comes to how to train a French Bulldog, be aware that this breed has a reputation for being stubborn, and if you try to force them to do something, they may become even more obstinate about not doing it. On the other hand, French Bulldogs can learn new skills very quickly through positive reinforcement. Consult a positive-reinforcement trainer if you are having trouble training your French Bulldog.

As you train your French Bulldog, keep their physical limitations in mind: With their short snouts, they can overheat quickly. Since Frenchies are on the small side, it’s important to keep the food treats you use very small (the size of your pinky nail or smaller) so they don’t gain weight as you train. For example, Zuke’s Mini Naturals Salmon Recipe Dog Treats cut into halves or quarters are a good size for French Bulldogs.

Frenchies share a delightful temperament and can make excellent companions for all types of pet parents. They can go anywhere with you, thanks to their good-natured, affectionate ways. And while they’re happy to snuggle up with you, they also like fun and games, including agility and rally. In short, French Bulldogs could be the perfect pet for just about any dog lover.

Learn even more facts about Frenchies: