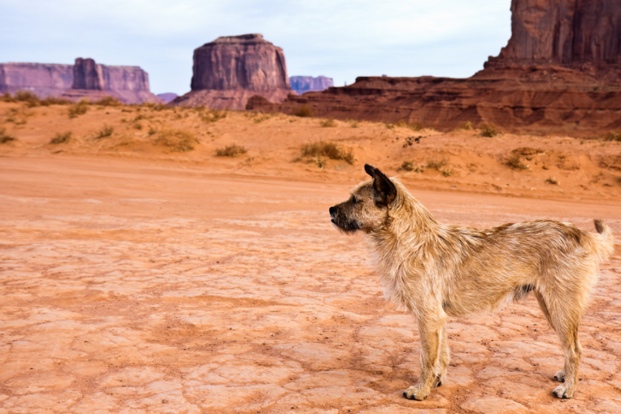 Long days, bright, sunny weather and afternoons made for the beach—while we’re all thrilled to welcome the arrival of summer, some dogs may be more prepared to bask in the glow of warm days more than others.

Although these breeds may be more able than others to spend time in the sun, all dogs should be provided with access to plenty of shade and water when outdoors during the summer months and should be brought indoors when it’s exceedingly hot. Because dogs aren’t able to sweat the same way as people, relying on panting to cool them down, they can be ill suited to cope with heat and more prone to heat exhaustion and dehydration, specifically breeds with dark coats or brachycephalic (breeds with short noses and long, flat faces).

Steve Dale, CABC, shares the dog breeds that can weather the hot temperatures.

A hardworking breed that loves having a job to do, the Australian Cattle Dog has worked as a sheep herder in a variety of dry, arid places over a very long period of time, said Dale, who is also a co-editor of “Decoding Your Dog” with Dr. Debra Horwitz and Dr. John Ciribassi (the American College of Veterinary Behaviorists authors the book). Known for its intelligence and success in agility training, the Australian Cattle Dog is a robust, muscular breed that can seemingly deal with anything that comes its way.

Originally called the bush or Congo dog in reference to the area of Africa from which the breed hails, the Basenji evolved in warm weather and has been known to seek out warm, sunny places in a person’s home, Dale said. With a very short coat and long legs for their size, the breed’s build allows heat to escape their bodies in every way possible. Fairly quiet—the breed’s larynx produces a distinct yodel but makes it difficult for them to bark—the Basenji is a good apartment dog and can even handle places without proper air conditioning, Dale said.

The only breed native to the country of Israel, the Canaan dog was originally discovered living with nomadic people in the desert, Dale said. Because it has adapted to living in such a warm, dry climate, the Canaan Dog can generally do well in hot weather. A larger dog for this list, the Canaan Dog can be up to 50 pounds in size and have a dense, moderately heavy coat, which can help keep heat off. An intelligent, easy-to-train breed that makes a good family dog, the Canaan Dog is also known for being an effective watch dog, Dale said.

The smallest of all dogs, the Chihuahua does well in warm weather because of its pint-sized build and short coat that’s generally light in color. Although the breed can handle summer months without a problem, they tend to suffer in cold weather because they’re ill suited for winter conditions, Dale said. Because of its size, Chihuahuas are great for apartment living and require minimal grooming and exercise.

An affectionate lapdog brought to the United States by burlesque dancer Gypsy Rose Lee, Chinese Crested dogs prefer summertime and are known for cuddling as close to their people as possible in the winter to keep warm, Dale said. This friendly breed comes in two varieties—hairless and powderpuff, with the powderpuff having a coat of fine hair all over its body and the hairless having light hairs only on its paws, ears and tails.

A very ancient breed that’s featured predominately in artwork across Europe and the Mediterranean, the Italian Greyhound is not a smaller-sized traditional Greyhound (as many people think) but rather a breed all on its own, Dale said. With a small build, long legs and a fine, short coat, the Italian Greyhound is well equipped to cool down in hot weather and comes in a variety of colors. Kept by royalty throughout history, the Italian Greyhound still believes it is royal and should be treated as such, Dale added, and will often be found sleeping in window sills or sunny spaces like cats.

Hailing from South American climates and dating back to cultures that have long disappeared, these ancient Peruvian dogs are very rare breeds. With a variety of color combinations, both the Peruvian Inca Orchid Dog and Peruvian Hairless Dog have very little hair, making it easy for them to keep cool but exposing them to sunburn more easily than other dogs. These breeds, Dale said, can benefit from sunscreen in warm months and, because of their lack of hair, may be suitable for pet parents that have dog allergies. They also come in a variety of sizes, with the Inca Orchid Dog weighing up to 50 pounds and the Peruvian Hairless Dog weighing between 10 and 50 pounds.

Another ancient breed that, according to the American Kennel Club, is one of the oldest domesticated dogs in recorded history, the Pharaoh Hound is the national dog of Malta and has spent thousands of years in warm, desert-like climates. Depicted in artifacts from ancient Egypt, Pharaoh Hounds have very short, coarse coats that are low maintenance and light colored fur that help reflect sunlight. Because of their natural hunting abilities, the Pharaoh Hound may chase after small animals and requires regular exercise in high-fenced spaces.

A fun, personable breed that’s eager to please and makes a surprisingly good watchdog, the small size of the Toy Poodle and it closely-clipped, short coat allows it to handle summer weather well, Dale said. Though it doesn’t make an excellent swimming dog—like the other breeds on this list—Toy Poodles have been known to take a dip in the bath or a small pool in warm weather and the light-coated varieties do particularly well in the heat. According to Dale, Miniature Poodles can also do well in warm weather, as their size is not that much larger than their Toy-sized relatives.

Another hairless breed, the Xoloitzcuintli (pronounced shoh-loyts-kweent-lee) hails from Mexico and can be seen depicted in Aztec and Mayan art and culture from centuries ago. A recent addition to the AKC registry, Xolos come in three sizes, including toy, miniature and standard, and can weigh from five or six pounds up to 40 pounds. The smaller sizes, Dale said, are generally more adept at handling warm weather than the larger breeds. Spunky and alert, Xolos will be sure to let you know when something is going on and may be good choices for people with allergies to dog dander, as their lack of hair produces less allergens than dogs with heavier coats.