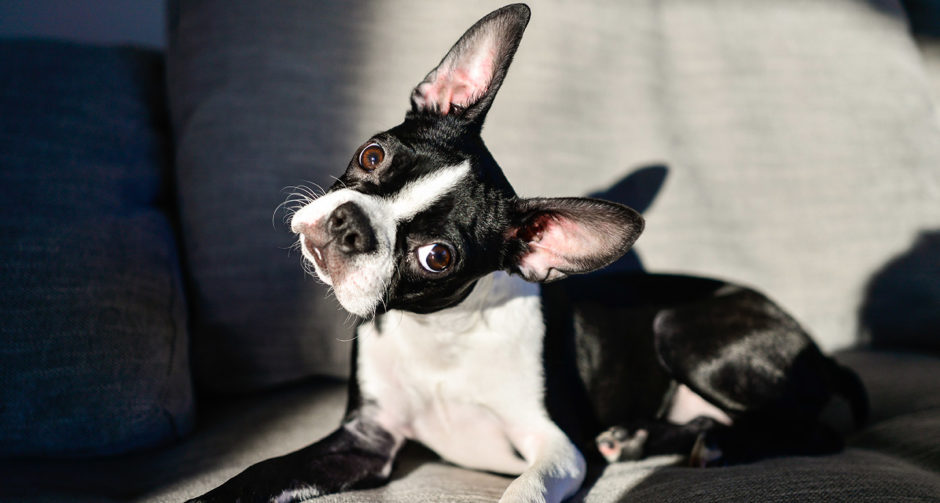 Originating in the late 19th century, the Boston Terrier is now referred to as “The American Gentleman” for their loving nature and their signature tuxedo coat. With traits including large, expressive eyes, a shortened snout and a friendly personality, it’s easy to understand why so many people love this dog breed.

The Boston Terrier is a relatively small but muscular breed with a host of endearing qualities.

Boston Terrier history dates back to the late 1860s in Liverpool, England, with Judge, the dark brindle male offspring of a Bulldog and an English Terrier. Boston Terriers were bred for ratting contests and pit fighting during this period, which resulted in a frenzy of breeding terriers with bully breeds. Judge had a solid build, a square, blocky head and dark brindle coat with a white face stripe. At about 32 pounds, he was bulkier than today’s Boston Terrier dogs.

An American by the name of William O’Brien purchased Judge and sold him to fellow Bostonian Robert C. Hooper, who bred him with Burnett’s Gyp, a white 20-pound Bulldog-type female owned by Edward Burnett. The pair produced Well’s Eph, a 28-pound pup who, like his dad, was dark brindle with white. Through early selective breeding, the Boston Terrier became the smaller, more affable dog breed known today.

Boston Terrier enthusiasts formed the American Bull Terrier Club in 1889, changing it to Boston Terrier Club of America two years later after pushback from Bulldog and Bull Terrier devotees. The American Kennel Club (AKC) officially recognized the Boston Terrier in 1893 as its 48th breed, and currently rank its popularity at 21 out of 191 breeds. Boston University adopted the breed as its mascot in 1922, later naming him Rhett after Rhett Butler of “Gone with the Wind.”

With more than 160 Boston Terrier breeders listed on the AKC website, Boston Terrier prices vary. Although it’s possible to find a pup for $500, most fall within the $1,000-$1,500 range, with some priced higher. Alternatively, you can adopt a Boston Terrier from dedicated Boston Terrier rescues, or by keeping an eye out for the dog breed at your local animal shelter.

This is a muscular, compact, sturdily built dog with a square head, deep chest and strong legs. They move with rhythm, power and grace, and naturally have short tails and small, erect ears. In some cases, Boston Terriers’ ears are cropped via veterinary procedure if they don’t naturally stand upright; this is a cosmetic procedure and not considered medically necessary.

Like other brachycephalic (short-snout) breeds, including the French Bulldog, Pug and Bulldog, the Boston Terrier has a higher risk for overheating in hot temperatures. Another notable Boston Terrier characteristic are their eyes. They’re round, expressive, large and protruding, conveying the breed’s intelligence and warmth. 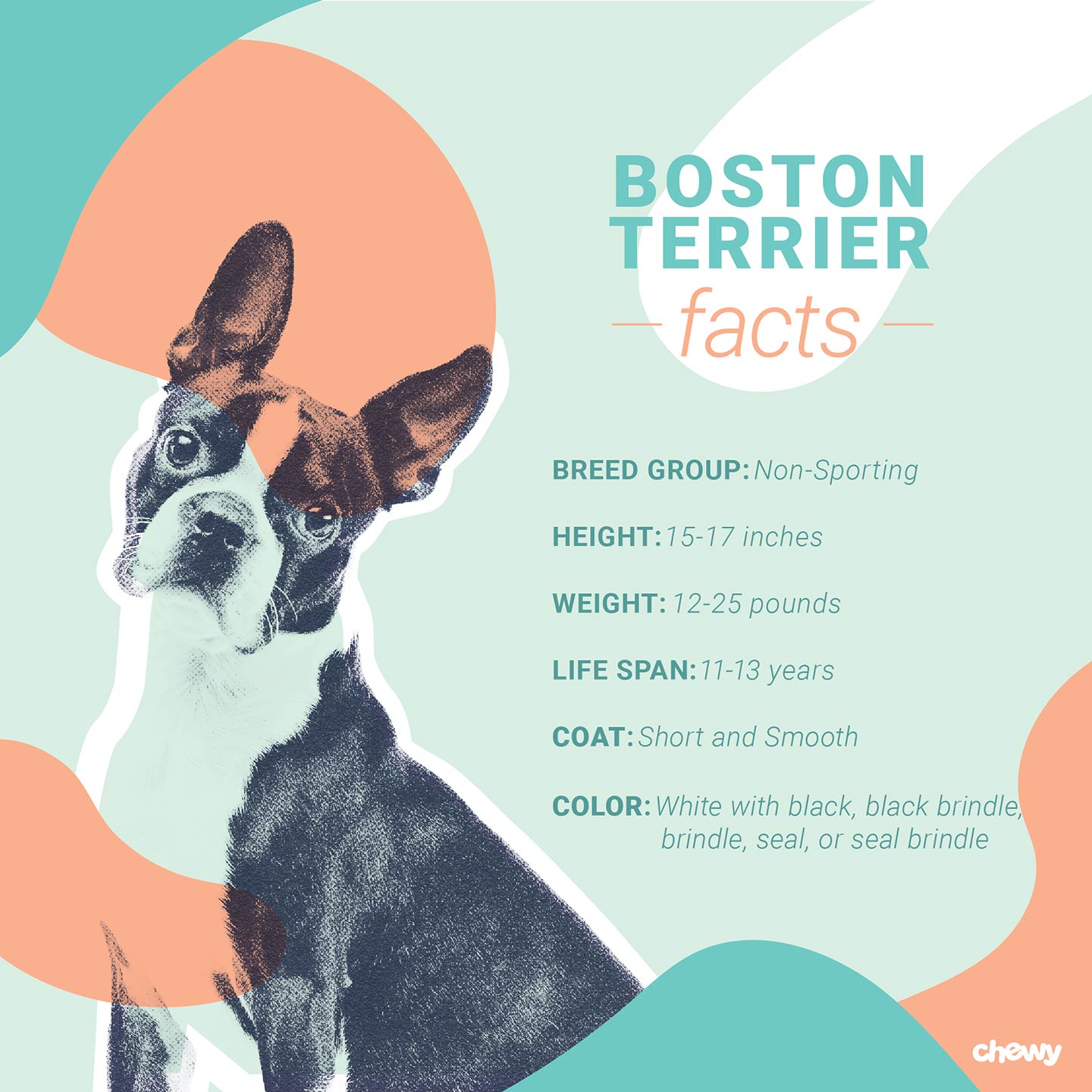 The Boston Terrier temperament is friendly, and the breed has a childlike sense of humor. Boston Terrier behavior includes having a great deal of energy, but they can make an ideal house or apartment dog due to their small size, as long as brisk, daily walks are provided. Boston Terriers tend to bark a lot, like to dig and will often snort and snore.

Are Boston Terriers good with kids? Typically, Boston Terriers are good family pets, and are usually friendly to other pooches, though they can be suspicious of strangers. When properly introduced, Boston Terriers can be good with cats, as well. Very young children might annoy this small-statured dog, but they often enjoy interacting with older children.

In general, this smart breed has an alert and kind face and is lively with those they know.

Keeping Boston Terrier Dogs Healthy: 5 Issues to Watch Out For

Although Boston Terriers are usually healthy, there are some conditions of which pet parents should be aware. By recognizing Boston Terrier health problems early, you can seek treatment sooner and potentially avoid problems altogether.

Boston Terriers have prominent eyes that can be traumatized easily. Cataracts, glaucoma, dry eye, corneal ulcers, eyelash disorders and cherry eye are all seen in Boston Terriers. All of these conditions can be painful or cause blindness. If you notice that your Boston Terrier has red eyes or is squinting, take them to the veterinarian as soon as possible.

Boston Terriers have very large heads, too big to fit through the birth canal—an incidence called dystocia. Due to this common issue, Boston Terrier puppies are usually born via caesarian section surgery.

Brachycephalic dog breeds, like Boston Terriers, have short, narrow noses and airways, and they can have difficulty breathing as a result of this condition. Surgical treatment is available to cure it.

Boston Terriers are known to have problems with luxating patella, where the kneecap pops in and out of place. Luxating patella can lead to osteoarthritis. Surgical treatment is available.

Caring for Your Boston Terrier Dog

Knowing how to take care of a Boston Terrier can help eliminate and prevent a lot of problems. They need love, exercise, grooming and proper nutrition, and, with appropriate care, the Boston Terrier life span can reach, on average, 11-13 years.

Boston Terrier hair coats are easy to care for—an occasional brushing is all that is needed—and Boston Terrier shedding is relatively minimal.

If you’re wondering what to feed your Boston Terrier, this breed, like most, can benefit from eating a complete and balanced commercially formulated dog food. They can be fed dry food or a combination of dry and canned food. Because they have small mouths, Boston Terriers may benefit from eating a dog food that is specially formulated for little mouths, like Nutro Wholesome Essentials Small Bites dog food.

Like all dogs, Boston Terriers need exercise. Because this brachycephalic breed can have difficulty breathing in very hot or humid weather, avoid overexerting or exercising them in these conditions. Most Boston Terriers are quite happy with a daily 30-45-minute walk and playing some games with their pet parents.

Can Boston Terriers swim? Yes, but not all of these dogs love water. If you have a water-loving Boston Terrier, fit them with a life vest when around bodies of water.

Start training early during puppyhood. Crate training is a great way to teach potty manners, because it allows the puppy to teach themselves. If they have an accident while confined, they must live with it until they learn to tell you when they need to go to the bathroom.

Boston Terriers tend to be food motivated, so a scrumptious treat they only get during training can be helpful. Establish the rules of the house early, and make sure everyone in the family agrees, or your dog will quickly discover who lets them get away with breaking the rules.

A harness and leash work best for the Boston Terrier, rather than attaching the leash to a collar. Neck pressure can cause brachycephalic dog breeds some breathing or eye issues. While Boston Terriers have the ability to learn tricks and compete in obedience, the smartest dogs can be the most difficult to train.

Boston Terriers are small, active companion animals who get along with almost everybody, including kids and other dogs. These dogs are equally at home on the couch or out on a jog, and usually have a happy, enthusiastic attitude.