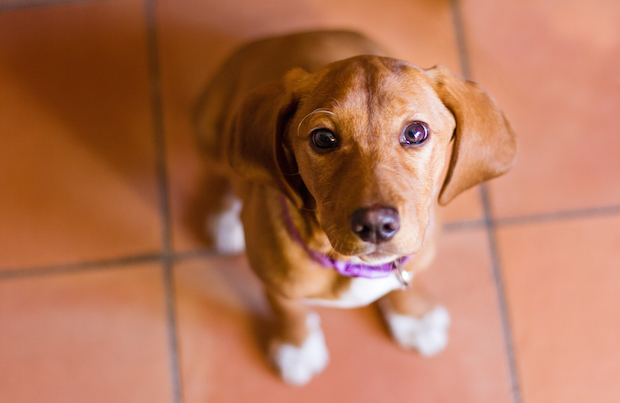 Making messes, running wild and being a little too curious around the house are all behaviors we expect of our beloved pups at one point in time. But which breeds take a bit more effort to manage than the rest? Though the natural instincts of some breeds help them to excel in the field or with properly trained handlers, they may not make the best choice for inexperienced pet parents. While we encourage all prospective pup moms and dads to research which type of pet is best for your family, we’ve asked the American Kennel Club to share the breeds that could present the biggest challenges for first time owners.

Considered the “workaholic” of the dog world, according to AKC spokesperson Lisa Peterson, the Border Collie is highly driven and extremely energetic. A breed that thrives when they have a job to do and space to run, Border Collies require much more exercise than a walk around the block or a quick romp in the yard. If first time pet owners don’t know how to keep their Border Collie sufficiently stimulated, occupied and exercised, the breed may develop behavioral issues.

Trained as a property watchdog and wild boar hunter in Italy, Cane Corsos are large, strong dogs with a dominant nature and strong will, according to Peterson. If they aren’t able to establish themselves as leaders of the household, potential pet owners run the risk of their 120-pound Cane Corso ruling the roost. Because of its instincts as a guardian, Cane Corsos form strong bonds with their owners and can be very protective over them. Loving with its owners and affectionate towards children, the Corso is alert and can be territorial.

A courageous, sensitive breed that likes to do its own thing, the Skye Terrier can be stubborn and very wary of people and dogs it does not know. Comfortable living indoors as a companion dog, the breed does require regular outdoor activity. With a double coat and hair that can grow over the breeds face and eyes, Skye Terriers require regular bathing and brushing to prevent mats, making its grooming needs a bit too much for first time owners.

Though the Bloodhound is an extremely affectionate breed, their take-charge nature makes it essential for pet parents to be the undisputed boss in their home, Peterson said. With one of the strongest noses in the world, the Bloodhound will always want to follow its nose and may pull an unaware owner regularly on the leash to follow a new scent. Like most hounds, Bloodhounds may bay often to alert their owners of nearby danger (real or perceived) and is also prone to chasing small animals.

Known for its extreme endurance, competitive spirit and desire to perform, the Treeing Walker Coonhound is a favorite of hunters but may not be ideal for first-time pet parents. Originally bred to track and tree wild raccoons, the Treeing Walker Coonhound has a competitive spirit and requires regular activity to stay in shape and is best suited for families that lead an active lifestyle. Though the breed is intelligent, condiment and social, new owners may not be prepared for its desire to chase small game while outside or the barking that will come along with it if they tree their quarry, Peterson said.

Historically isolated in the Himalayan mountains to guard tents and families when flocks were moved to higher pasture, Tibetan Mastiffs was bred to be kept confined during the day and let loose at night to continue their duties as a watchdog. As a result of its ancestry, the breed is extremely independent and intelligent and may have its own agenda in the home. Due to its protective nature, the Tibetan Mastiff may act aggressive towards strangers, making it difficult to bring new people home. Though it is loyal and loving to its family, the breed will require proper obedience training and socialization from an early age on in order to live well with families and be around other animals. These training requirements may prove too difficult for first-time owners.

A powerful working breed that originated in Japan, the Akita is large, alert and has strong guarding instincts. Known to be relatively quiet—the breed is called the “silent hunter” in Japan, according to Peterson—Akitas will sound the alarm if an intruder breaks in. Although they make wonderful guard dogs, the Akita likes to be the leader of the pack and requires a strong hand in training. The breed’s temperament can range from calm to bouncy and aggressive, so it should always be supervised around small children and other animals, Peterson said.

It’s important to keep in mind that, although these particular breeds may require more training than others, all breeds require plenty of positive training and socialization from an early age in order to be happy, well adjusted pets in the home. First-time pet parents should do plenty of research before committing to a breed to ensure they understand the temperament, medical conditions and grooming needs of the breed they’re interested in before they take it home.