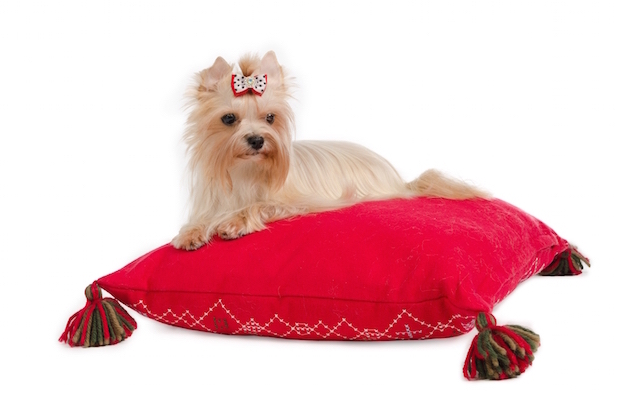 While you might let Muffin act like the Queen of the castle around your home, some dogs have truly been born in—and bred for—a life alongside the throne. With the insight of Stephanie Smith, the communications manager for the American Kennel Club, come learn about the eight breeds that were historically kept as royal dogs, from as early as the 7th century to modern times.

A breed well know and much loved by the Queen of England (who has maintained a breeding program for many years), the Pembroke Welsh Corgi traces its origin back to the 1100s, according to Stephanie Smith, communications manager for the American Kennel Club. A friendly and active dog, the Pembroke was brought to England by Flemish and kept in the home of Henry I. Though the breed shares its background—and many of its traits—with the Cardigan Welsh Corgi, the Pembroke is actually a much younger breed than the Cardigan.

One of the most ancient breeds known to man, Smith explained that the history of the Greyhound can be traced to nearly every country around the globe. While aristocracy has always surrounded the breed (in its early development, only royalty bred them), England played an important role in the development of the breed, with first illustrations of the Greyhound there dating back to the 9th century. A sight hound used to hunt a variety of game including deer, stags, foxes and hares, Greyhounds also have been used as racing dogs since the 18th century. A lively, gentle breed, the breed’s most valued trait today is its companionship.

Though the exact date of origin of the Shih Tzu is unknown, evidence of its existence has appeared in documents, paintings, and art from the Tang Dynasty (618 to 907 A.D.). Bred in the city of Peking by Chinese court, the Shih Tzu is also said to be the oldest and smallest of the Tibetan holy dogs. “The breed was also the preferred house pet of the Ming Dynasty and Dowager Empress Cixi,” Smith said. A small, playful dog, the Shih Tzu’s long, luxurious coat requires regular grooming.

Known as Le Grande Chien des Montagnes (“The Big Dog of the Mountains”), le chien des pyrenees (“the dog of the Pyrenees”), or the Pyrenean mountain dog, the Great Pyrenees was adopted as a French court dog in the 17th century. Known as both a royal breed and a working associate of peasant shepherds on the slopes of the Pyrenees Mountains, the breed is exceptionally loyal and gentle and is said to be fearless as a guardian of its people and flock.

An ancient Chinese breed that was owned exclusively by royalty (the penalty for stealing a Pekingese was death), the Pekingese has appeared in Chinese art and history throughout the ages, beginning with the Tang Dynasty of the 8th century. Originally named after the ancient city of Peking (now known as Beijing) the Pekingese came to Europe as a result of war. “When the British overtook the Chinese imperial palace in 1860, they returned home with several of the dogs,” Smith said. Happy, loveable and loyal, the Pekingese makes a wonderful lap dog.

A small, friendly dog that thrives on human companionship, Smith explained that the Coton de Tulear is known as the “Royal dog of Madagascar.” The breed originated there in the 17th century and was kept exclusively by noblemen, known as the Merina, the ruling monarchy in Madagascar. The Conton de Tulear is a loving and happy companion, but does require regular grooming to maintain its soft, dense coat.

Originally developed for the sole purpose of accompanying the ladies of the Imperial Palace and warming the laps of Chinese aristocracy, the Japanese Chin’s history is steeped in royalty. Bred to live in the literal lap of luxury and passed from China to Japan as part of a royal gift, the Chin’s only job during its long career has been to charm and amuse their people. Graceful, quiet and fastidious self-groomers, the Chin is also “distinctly feline,” Smith said.

“These are smart, sensitive, occasionally stubborn little humanoids who are quick to learn, one breed expert says, “as long as they think it is their idea,’” Smith added.

A true traveler of Europe, the Bichon Frise made its appearance in France during the Renaissance under Francis I and, later, Henry III. The breed became a favorite of Italian nobility in the 14th century and was also popular in Spain, becoming a favorite of Spanish nobility as well as painters (the breed, according to Smith, is featured in a number of Goya’s paintings). With a name that means “fluffy white dog” in French, the Bichon is exactly that, a small, charismatic and cheerful dog with a curly white coat.