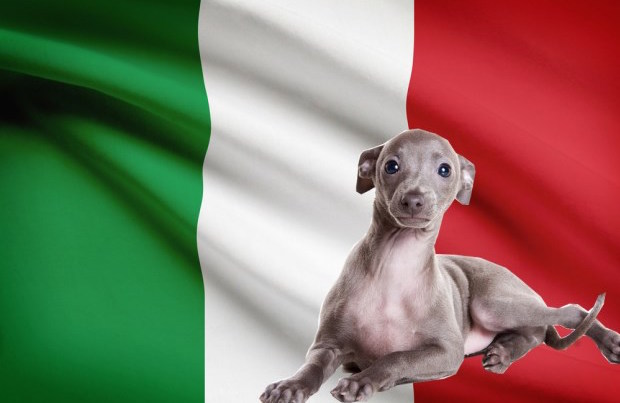 The country well known for its delectable fare, art and history has something else to be proud of! Move over French Bulldogs and Chinese Crescents, Italy actually boasts a few breeds of their own. “There are a wide variety of Italian breeds, each unique in their temperament, size, energy level, exercise and grooming needs,”says AKC spokesperson Lisa Peterson. Check them out.

According to AKC’s registration statistics, the Cane Corso is the most popular Italian dog breed. The Cane Corso is a large, muscular and athletic dog that needs a lot of exercise. “In its native Italy, Cane Corsos were property watchdogs and hunters of wild boar,” says Peterson. They are very intelligent and perceptive, making them easily trained. They are affectionate and bond closely with their family.

This breed is a light shedder, only needing an occasional brushing with his favorite dog brush. The Cane Corso is very athletic and would do best with an active family that would be able to provide lots of exercise. They also need early socialization and training, especially due to their large size.

Also known as the Italian Pointer, the Spinone Italiano has a sociable and docile temperament. He is naturally cautious, perhaps a trait that was developed when the breed was used as Italy’s all purpose hunting dog. The Spinone loves to be around family and activity. He is a relatively low maintenance dog, as the AKC puts it: The Spinone is the ultimate wash and wear breed and should remain in a natural state, with just occasional brushing and hand-stripping.

Read more about the Spinone Italiano.

This little toy breed started off with a much bigger name, at one time called “Ye ancient dogge of Malta,” the Maltese breed has been an aristocrat of the canine world for over 28 centuries, owned by royalty all over the globe, says the AKC. And while the original name may suggest that the breed had its start in the Isle of Malta, most  think it originates from the Sicilian town Melita. The breed was used to hunt rats and mice from harbor warehouses and merchant ships, perhaps giving it its global notoriety.

Today, the Maltese has left it’s rat hunting days behind and is favored as a companion dog, preferring to chase dog toys around the house instead. The breed is affectionate, lively, and fearless despite its small size says the AKC, and the dogs are intelligent, very fast learners. Aside from their enjoyable disposition, the Maltese is popular for its beautiful long, silky white hair.

The Lagotto Romagnolo is a breed of dog that comes from the Romagna sub-region of Italy. The breed can be considered especially valuable to those who love to cook—or eat!—they originally specialized in truffle-hunting on any kind of ground. The Lagotto Romagnolois a medium-small size dog with thick and curly hair of woolly texture. The breed is considered to be clever, affectionate, very fond of his owner and easily trainable.

Having a more recently wild origin than most domesticated dogs of today, the Lupo Italiano, directly translates to mean the Italian wolf. The breed was created in 1966 by crossing a wild wolf from Northern Lazio, Italy with a German Shepherd. Not long after, the Italian Government saw the breeds potential as a working dog and officially recognized it and passed laws to provide financial resources for its breeding.

Today, the dogs are used by Alpine rescue teams to search for avalanche victims and as rescue dogs to locate people trapped under the debris caused by natural disasters. The dog looks very similar to a German Shepard and its snout resembles that of a wolf.

Used as property watchdogs today, says Lisa Peterson, the Neapolitan Mastiff famous for its size, were originally used as dogs of war by the Roman army. In this breed’s case, their bark is typically worse than their bite, Mastiffs are generally peaceful, steady dogs says the AKC. They have short coats that can be gray, black, mahogany or tawny and are famous for their loose, wrinkly skin.

Not exactly a wolf in sheep’s clothing, the Bergmasco is a dog in not only dog hair, but goat hair and wool as well! The combination forms a gray or black felt-like mat which grows over the course of the dog’s life. It hits the ground around 6 years of age, giving it that famous mop-like appearance.

Shepherds from Iran brought the breed to the Italian Alps, where the dogs became known as Bergamascos. After World War II, there was less need for shepherding dogs causing the breed to be in danger of becoming extinct. Dr. Maria Andreoli, an Italian breeder, helped reestablish the Bergamasco.

Learn more about the Bergmasco.

This little dog is well suited for big city or country life and it’s sweet nature makes it the perfect companion dog. Ancient decorative arts of the Mediterranean countries dating back to the Renaissance include the miniature breed, perhaps clueing us in to its origin. According to the AKC, there is a debate as to whether they were originally bred for hunting small game or have always been meant to simply be great companions.