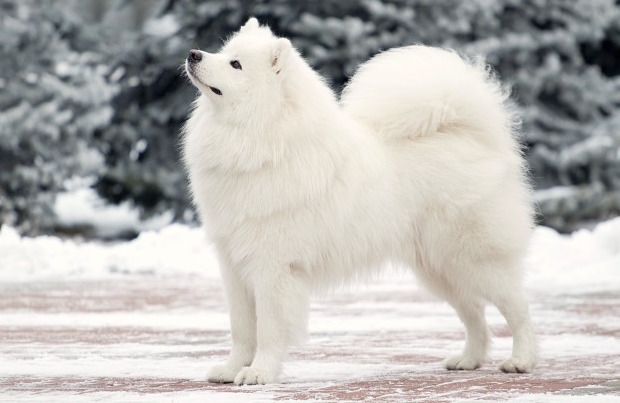 Is your dog a bit of a snow bunny? Just like people, some dog breeds will take a blizzard over the beach any day!

“Most breeds that love the snow originated in cold, snowy regions and were bred to do jobs in the snow, like sled dogs,” says AKC spokesperson Lisa Peterson.

While my chihuahua-dachshund mix, Daisy, may love to zip around with snow kicking up behind her, there are a few breeds that were quite literally bred for cold climates. Here are 8 dog breeds that love the snow.

The snow dog we all know and love, the Siberian Husky is ranked 14th most popular according to AKC’s registration statistics. “The Husky originated in the cold climate of Northeast Asia and was also bred to be a sled dog.” says Peterson. They have a thicker coat than most other dog breeds, made up of a dense cashmere-like undercoat and a longer, coarse top coat.

“An ancient breed from Scandinavia with Nordic traits, the Norwegian Elkhound is used to hunting in the cold climate it came from,” says Peterson. “These traits have stayed with the breed and it makes a great cold weather companion.”

Want to indulge in a little cold weather fun with your snow-loving dog? Try playing a game of snowball fetch. Assemble a pile of snowballs and toss them one after the other. Your dog may not be able to retrieve the “ball” but he will have tons of fun chasing after them.

“The Saint Bernard comes from the Swiss Alps and was originally used to locate freezing and helpless travelers during snowstorms, so this breed is used to being in cold and snowy regions,” explains Peterson.

Their coats can be long or short, but the dense makeup helps to keep the breed warm.

Described as a true workhorse by the AKC, the Newfoundland is not only a skilled long-distance swimmer, but also has true lifesaving instincts in the water. Today, used as a rescue dog, the breed was originally a working dog that pulled nets for fishermen. His heavy, plush coat protects him from icy waters and cold temperatures, making him a snow-enthusiast’s perfect match.

The breed famous for its long, striking coat, originated in the early 19th century in the western counties of England where they herded sheep and cattle into major city markets back in day. The Old English Sheepdog’s long dense coat serves as insulation and provides stylish warmth in cold climates.

“The Alaskan Malamute is a great cold weather breed because of its origin – they come from Alaska and are the oldest and largest of the Arctic sled dogs, having been used for freighting in the Arctic,” says Peterson.

Malanutes have thick and coarse coats, which help keep them toasty while frolicking in the snow.

According to the AKC, the Bernese Mountain Dog’s intelligence, strength and agility helped him perform the drafting and droving work in the mountainous area where he originated. His long silky coat kept him warm in the frigid region.

A fun game to play with the breed in the snow is something I like to call the “Winter Wonder Maze.” After shoveling in a linear maze-like pattern, place his favorite treats at different points and let him track and retrieve his reward.

“Hailing from Siberia, the Samoyed is good in cold weather due to its original jobs of herding reindeer, hunting, and hauling sledges,” says Peterson.

The breed was cherished by Samoyed people, who allowed the dogs to sleep in their tents. Thanks to the breed’s heavy, weather resistant coat, the Samoyed not only stays warm in cold weather but loves being outside in it.