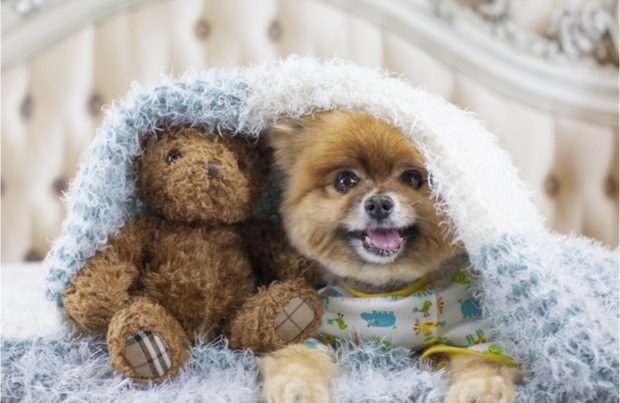 While there are a lot of traits that draw us to our pooches, canines that look and feel like stuffed animals have a certain extra something that dog lovers find appealing — let’s call it an increased cuteness factor. “Dogs that look like stuffed animals are adorable to look at, but remember that just because they’re cute and cuddly looking doesn’t mean they are necessarily the right breed for your lifestyle,” says Gina DiNardo, vice president of the American Kennel Club. “Every breed has a distinct temperament and specific grooming, training and exercise needs.”

If you’re still looking for a cuddly teddy bear dog breed to call your own, consider one of the following. (After you’ve done your research on how to care for them, of course!)

The Bichon Frise is often compared to a cotton ball due to its fluffy, curled double coat. “It’s a cheerful, gentle dog that requires regular exercise,” says DiNardo. Also, the Bichon’s hair grows continually and doesn’t shed, so it requires extensive grooming to prevent mats. But if you can keep up with the grooming and commit to regular walks and playtime, the Bichon is a cuddly, cute companion to add to your home.

Chow Chows undeniably look like big, giant teddy bears, but if not trained properly they can be highly protective of their owners and suspicious of strangers.

Known for their blue/black tongues and lion-like appearance, the Chow Chow is independent with a cat-like personality. “Regular grooming and bathing is a must to maintain their double coat,” DiNardo adds.

This cross between a Poodle and a Golden Retriever ranges in size from small to large, depending on the type of Poodle in the mix, says Kristen Levine, founder of the Pet Living Blog. “This cross breed is easily among the cutest in personality and physical appearance,” she says. “The doe-eyed pooch has a curly to semi-curly coat, an affectionate personality, and even when grown, retains a puppy-like curiosity and love for play.”

The Great Pyrenees is an intelligent dog with excellent scenting ability and sight. “They are affectionate with family, but possess the innate instinct to guard and protect,” says DiNardo. “They have a thick, weather resistant white coat that requires brushing at least once a week.”

Tibetan Mastiff’s have a thick coat and square muzzle that gives them a stoic, loveable appearance. Extremely intelligent and independent, Tibetan Mastiffs are very protective of their family and property, as they were bred to be guardians. “They have an immense double coat that sheds once a year and requires regular brushing,” says DiNardo.

Not only is this combo of a Bichon Frise and a Poodle super cute, but the breed doesn’t shed, either. “This combination is fairly uncommon, but they have a nearly shed-free, cuddly wool coat, and they’re guaranteed to stop strangers in their tracks wanting to pet this curly cutie pie,” says Levine.

The Pomeranian is known to be alert, loyal and fearless with outgoing personalities. “Poms are active, but indoor play and short walks will do the trick,” says DiNardo. “They make great family pets, however, because of their small size, they might not be a good fit for families with very young children. The breed’s thick, profuse double coat should be brushed twice a week.”

Also remember that Pomeranians have three types of faces, says Levine. “But the Teddy Bear face is among the cutest with its smooshed appearance,” she adds. “The eyes are a bit closer to the nose and the cheeks are fuller. Pair those irresistible characteristics with a fuzzy coat and tail curled over the back and you have a living Teddy bear.”

Because of their shorter facial structures, Teddy Bear Pomeranians can have more difficulty breathing than regular Fox-Faced Pomeranians, so be cautious during physical activity or in hot weather.

This small breed pairs the Husky with the Pomeranian for a fluffy, plush pooch with pointed ears. “Often mistaken for a mini or a puppy Husky, this darling is among the cutest of the cute,” says Levine. “This playful breed is also very energetic, and maintains its puppy personality into adulthood.”