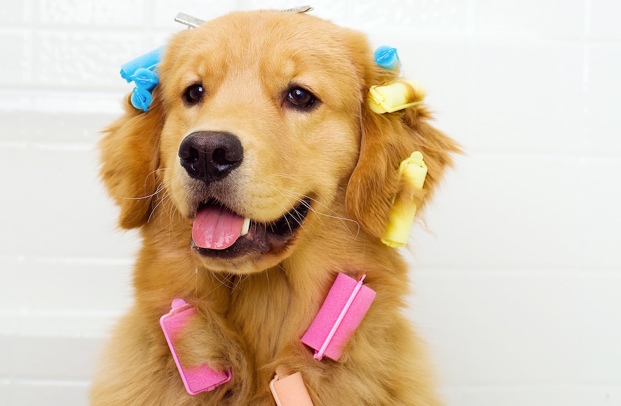 Looking for a dog breed with a minimal-shedding coat and great-looking curls? We’ve asked American Kennel Club spokesperson Lisa Peterson to share with us some popular (and lesser-known!) curly-coated dog breeds in addition to some tips on how to properly care for wavy-haired coats.

A strong and agile breed developed to be a multi-purpose hunting dog, the Curly-Coated Retriever has a coat of small, tight curls that are water-resistant. A breed that loves to swim and will work as long as there is work to be done, the Curly-Coated Retriever is known for finding and retrieving game in the heaviest of cover and iciest of waters, Peterson said. A loyal family dog that will do best with an active family, the breed first appeared in the United States in the early 1900s and comes in a black or liver color.

A medium-sized herding dog that originated in Hungary in the 17th or 18th century, the intelligent and energetic Pumi is used to herd cattle, sheep and swine, Peterson said. Recognized by its circular tail and long head, the Pumi’s coat is a combination of wavy and curly hair and forms corkscrews all over the breed’s body. The Pumi is an effective and versatile stock dog and knows how to use his voice and quick movement to keep herds under control. The breed sheds only when combed (which should be about every two weeks) and should be groomed approximately every three months, Peterson said. The Andis deshedding tool is just one of the many tools that can help remove loose hair and keep excess shedding to a minimum.

A loyal working and companion dog that was developed in its native Portugal to accompany fishermen on their boats, the Portuguese Water Dog loves the water and has a curly waterproof coat. Used to guard boats, retrieve broken nets, dive for fish and carry messages between boats and the shore, the coat of the Portuguese Water Dog can be black, white, brown or a combination of the three and requires regular maintenance. Clippers, such as the Andis ProClip AGC2 UltraEdge clipper, can help make the breed’s coat more tolerable for people with allergies by keeping it in a lion clip (with a shorter hindquarters and muzzle) or a retriever clip (with the entire coat clipped to about one inch in length), according to Peterson.

With origins that are slightly murky and contested by many experts, the one thing that’s known for sure about the Spanish Water Dog is that the breed is a multi-purpose dog that was developed in Spain many centuries ago, Peterson said. With jobs that include herding, hunting, water work and companionship, many Spanish Water Dogs enjoy swimming and protecting its family. This breed has a curly single coat that can be seen in shades of black, brown, beige, white and parti-color.

In terms of coat care, the woolly texture of the Spanish Water Dog’s coat requires clipping at least once a year and should never be brushed, combed or blow-dried. If you’re unsure of how to care for your dog’s curls, Peterson suggests visiting the parent club website for your breed to learn more about coat care.

“Parent clubs are made up of longtime owners and breeders,” Peterson said. “Even though various breeds may have curly coats, they are not all maintained the same.”

Another curly-coated breed that—you guessed it—loves the water, the Irish Water Spaniel is the tallest spaniel breed and possesses a water-repellant double coat that consists of dense, tight ringlets, a topknot of long loose curls, a thick “rat” tail and a smooth face. This dual-purpose hunting dog is known for its skills on land and in the water. Its coat, which requires brushing every few weeks and trimming every two months, may be suitable for allergy sufferers, Peterson said. The Four Paws Ultimate Touch mat & tangle remover is specially designed for curly fur, great for maintaining the Spaniel’s skin and coat.

A small to medium-sized breed with a dense, curly coat, the Lagotto Romagnolo is the only breed in the world specifically developed to find truffles on all kinds of terrain, Peterson said. Known for its strength and endurance, the breed is used to working all day on difficult and challenging terrain and, in addition to its truffle-finding skills, has been used as a year-round water dog. The breed’s woolly coat has a thick undercoat that serves as an insulator and has water-repellant qualities.

One of the most intelligent and versatile dog breeds, the Poodle originated in Germany as a water retriever. Its famous “Poodle clip” haircut was designed by hunters to help the breed move through water more efficiently, while leaving patches of hair on the body to protect the dog’s vital organs and joints that were more susceptible to cold weather, Peterson said. The Poodle loves to impress its family and gets along well with children and other dogs. A breed that excels at agility training and other dog sports, the Poodle’s coat may reduce allergic reactions but requires regular grooming, preferably by a professional.

“If you’re not comfortable with using clippers on a coat or trimming with scissors or thinning shears, hire a professional groomer,” Peterson said. “Your breeder can make recommendations about where to find a reputable groomer [and] make sure they have experience working with your dog’s coat type.”

“No matter what the coat type [of your dog] is, it’s important to stay on top of the little things,” Peterson says, “[like] regular nail trimming, ear cleaning and usually weekly brushing.”