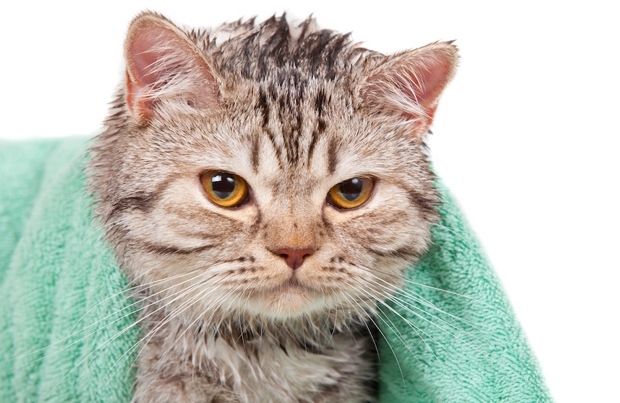 Cats’ fascination with dripping faucets and leaky hoses is well documented among pet parents, but what about the breeds that take it one step further? From their history as hunters and travelers to their curious and eager temperaments, some cats love both swimming in and being around water.

Because of their lack of hair, the Sphynx needs to be bathed regularly from an early age on and as a result, often likes being in the water, said Joan Miller, chair of outreach and education for the Cat Fanciers’ Association. A high energy, acrobatic breed, the Sphynx loves entertaining its people and craves human attention. Well-behaved and intelligent, the Sphynx does best as an indoor cat and can get along well with both dogs and other cats.

While the Sphynx requires regular interaction with the water to keep their oily skin in check, exposing any breed of cat to water from an early age on will help them be more comfortable around it, Miller said.

“Whether cats like or love the water is a matter of how they’re raised as kittens,” she said. “If they’re bathed early, it makes a big difference and they may like to be in the bathtub [as adults].”

One of the largest domestic cat breeds and an excellent mouser, Maine Coons are docile, obedient and very attracted to water. Cats like to copy their owners (hence the term “copy cat”) and if an owner likes to be in the tub or shower, they think it may be fun for them, too, Miller said, adding that a longtime Maine Coon breeder even hops into the tub with his own cats to bathe them!

Maine Coons, like many other water-obsessed cats, may tend to make a big mess around their water dishes. To help prevent spillage, try picking up a heavy-duty water bowl and consider a pet-approved drinking fountain to fuel their fascination without causing puddles.

With a long history as swimmers, Turkish Vans adapted to their climate in the Lake Van region of Turkey by growing a thick, full coat in the winter and shedding its hair in the summer to swim and fish. Because certain breeds evolved having to fish to survive, many of them still enjoy swimming today. In addition to their love for the water, the Turkish Van also enjoys playing games and is social with other animals and people.

A potential downside to having a breed that loves the water? Miller says they can easily learn to open bath and kitchen sink fixtures. “Some will learn to open the faucet if they can, so you’ll need to keep an eye out for overflowing sinks,” she said.

Curious breeds, like the intelligent and personable British Shorthair, tend to be fascinated by anything that moves, like water running from a faucet.

“They like to see everything going on and are intrigued by a shower and will hop right in if you let them,” Miller said. “They often play ‘splash’ in water dishes and love floating toys.”

Though the breed is not overly affectionate, it likes to involve itself in everything going on in their owner’s homes and has been known to communicate by meowing when it wants something specific.

Amusing and energetic, the Abyssinian is easily recognized by its silky, multicolored coat. With green or gold eyes, Abyssinians are independent but love being a part of their owner’s lives. Their active, playful nature and courageous attitude often attract them to water and, in Miller’s experience breeding Abyssinians, they are excellent natural swimmers.

Pet owners often forget that many cats came to the Americas and crossed seas on ships with travelers, settlers and traders. They were kept aboard as mousers and some Japanese sailors considered having a cat on ship to be good luck, Miller said.

“Cats are able to see the slightest movement on the water in the distance and would react before a storm would hit,” she said. “They were considered good luck because sailors thought they could foresee storms.”

An outgoing, social cat that loves human companionship, Siamese cats want to know what’s going on at all times.

“They will be near their owners at the kitchen sink playing in bowls of water and in the bathroom helping to wash their face the brush their teeth,” Miller said.

A born chatterbox, Siamese cats love to communicate with the people around it and can get lonely if left home alone too often. Because of its popularity as both a show cat and a pet, the Siamese has been used to form many modern breeds of cat including the Burmese, Tonkinese, Ocicat and Himalayan.

The mellow personality of the Burmese allows them to do well with water and a bath, Miller said. Combined with early exposure, a breed’s adaptability will help determine whether or not it likes water. With a temperament similar to that of a dog’s, Burmese are people-oriented, energetic and have even been known to play a game of fetch. Intelligent and easygoing, Burmese cats are comfortable in a variety of environments provided they have an owner to follow around.

Playful and curious, the Selkirk Rex will play in the water while you’re doing dishes or even in the shower, Miller said. With curly hair that covers the cat’s entire body, particularly around the neck and tail, the breed comes in both long and shorthaired varieties. Loving and curious, the Selkirk Rex hates being left alone and has been known to follow their owners around the house.

In addition to appreciating your cat’s love for the water, potential cat owners should do their homework and research important, behaviors, medical conditions and grooming needs of their desired breed before taking one home.