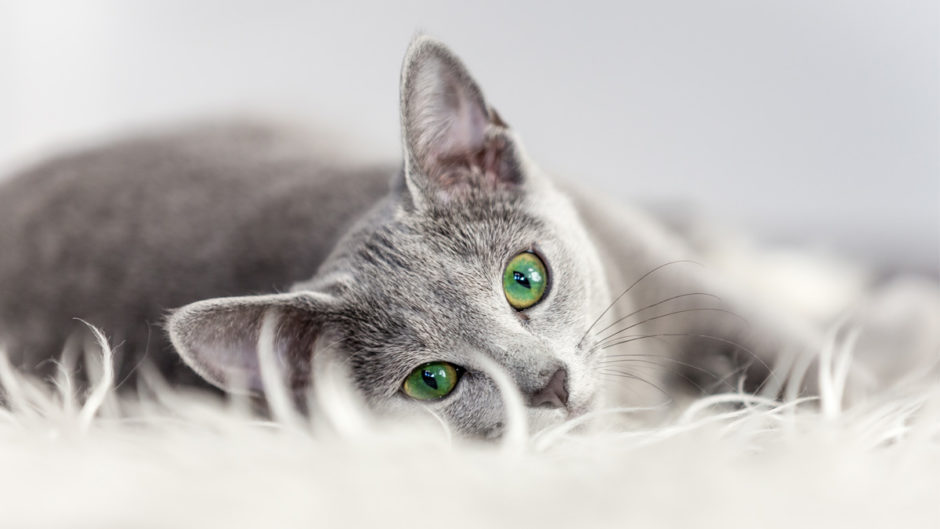 Cat lovers are likely to have their own preference when it comes to a favorite color for felines, but fondness aside, we can all agree that there’s just something about grey cats that make them beautiful and unique.

That sentiment is felt far and wide, including in the world of cat breeding, where grey is often preferred says Teresa Keiger, an all-breed judge with The Cat Fanciers’ Association.

Whether you’re a proud owner or an admirer, get to know what makes the cats that shine in all shades of grey, also called blue among fanciers—so special!

Known as the historic blue cat of France, Chartreux are one of the three breeds that come in only grey.

“They are a very robust cat in body, but have a delicate boning,” says Keiger. “Their coat is dense, but with a wooly texture, and ideally it will have breaks, just like a sheep’s coat does.”

The color in this cat is a solid down to the roots, and they benefit from regular combing to remove the dead hair from the coat.

Additionally, the breed is a moderately active one and are known for being interested in their surroundings and bonded to their owners, says Keiger.

In their native Thailand, the Korat—another of the three breeds that come in only blue — are considered good luck.

An athletic cat with a very muscular body, their coat is pale at the root, shading to an even grey at the ends. The hair shaft is luminous, reflecting the light in an even glow.

“Their head is made of a series of heart shapes,” Keiger says. “The outer portion of the head, including the ears, the head itself, then across the brow ridge, and the tip of the nose. You will even see a heart shape in the cat’s chest area.”

This talkative breed enjoys people and loves their owners.

The third and final breed that comes in only blue, the Russian Blue cat was beloved by czars and czarinas alike.

“They have a dense double coat — the first coat is made of straight guard hairs that are blue up the shaft, then end in a silver tip,” says Keiger.“This tipping is what makes them appear to shimmer.”

The Russian Blue has its own guard coat made of fine, crimped hairs that help keep the guard hairs separate.

“The luxurious coat is not resilient, though, and fingers easily make marks in it,” Keiger says.

As for their personality, the Russian Blue is an active breed that loves to play but is not very vocal.

“Smart and cautious, it will often wait to see if a new person is okay before it comes out to investigate,” says Keiger, “It has a tight bond with its owner and seeks him out for attention.”

Although grey is probably the most popular and well-known color in the British Shorthair breed, it does come in a variety of colors and patterns.

“It boasts the densest of all coats and is so plush and resilient that no fingermarks are left on it,” says Keiger.

As for their personality? “The Brit is an easygoing cat, and very fond of its human family,” Keiger says.

The Oriental Shorthair was developed to be a colorful cat with over 300 colors and patterns available, says Keiger.

“The blue color of the Oriental is a different blue than many other breeds,” she says. “It’s a medium blue with no tipping to accentuate it. All Orientals have a coat that lies very close to the body, giving the blue Oriental Shorthair a metallic appearance.”

Sweet and loving, this breed shares its love of talking with its Siamese ancestors. Maintenance is also minimal, requiring only a wipe down with a chamois or damp cloth to remove loose hair.

As the name might imply, the bright blue Persian has a full coat that’s quite a glory to see.

“Color ranges can be from a medium to light blue, but they should be blue throughout the hair shaft,” says Keiger. “The copper eyes create a lovely contrast to the coat.”

Persians are also known as sweet and loving cats, with a low activity level.

Although the brown tabby pattern is probably the most common color in this breed, they do come in a variety of colors, including grey, says Keiger.

“They possess a waterproof double coat that naturally protects them from the elements,” she says. “The guard coat provides a barrier, while the undercoat provides warmth.”

Because of their coat, the Norwegian Forest Cat requires a bit less maintenance then other longhaired cats, but they do require combing to be kept mat free.

Be sure to check out five grey cat gifts, whether it’s for yourself or the grey cat owner in your life.

Cheryl Lock is a writer and editor who lives in Denver, Colorado with her husband, daughter and cat, Penny. Her work has appeared in dozens of newspapers, magazines and websites, and she’s written about everything from pets and politics to parenting, travel and food. Find more of her work at CherylLock.com, or follow her passion for travel on her blog at WearyWanderer.com.