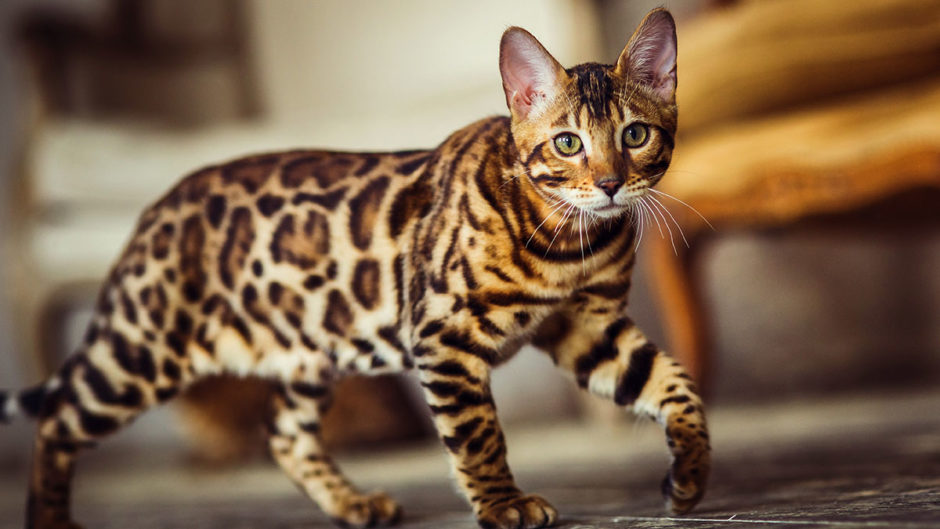 Spotted cat breeds are sought after for their exotic beauty. Some even have the blood of their wild counterparts coursing through their veins. But they’re much more domesticated than their wild cousins and make great pets.

“Many people dream of being able to have one of the big, beautiful wild cats in their living room. But that being pretty unrealistic, the next best thing is one of the small domestic cats with the look of their bigger kin,” says Vickie Fisher, treasurer for The International Cat Association (TICA).

“The Bengal should look like a little leopard,” says Anthony Hutcherson, chairperson of TICA’s Bengal cat breed committee. Like their larger, wild counterparts, the Bengal is very active and likes hanging out in high places. The playful breed loves interacting with people and can be easily trained to do tricks, he says.

“If you want a couch potato cat, don’t get a Bengal,” Hutcherson advises.

The Bengal breed was created by Jean S. Mill of California in the early 1980s. Mill started out by crossing a domestic cat with the Asian Leopard Cat, a small, spotted, non-domestic cat species from Asia, says Hutcherson.

The Bengal is the only spotted domestic cat breed with well-defined markings called “rosettes,” similar to those found on leopards, jaguars and ocelots, and can also have a marbled pattern, he adds. Bengals come in a variety of colors, including golden, bronze, mahogany, gray, and silver, with spots or marbling in black or browns.

Because of the Bengal cat’s uniqueness, Royal Canin developed a cat food specially formulated for him. The optimal high-level protein and fat help build and maintain lean muscle mass, and the Y-shaped kibble of Royal Canin Bengal cat food is adapted to the Bengal’s jaw shape.

With its regal bearing and refined build, the Egyptian Mau seems to know it was once revered as a deity by pharaohs. Papyri and frescoes as early as 1550 B.C. depict the distinctive spotted cats, and its ancient Egyptian roots are preserved in the breed’s name—the word “mau” means cat or sun in ancient Egyptian, according to Cat Fanciers’ Association (CFA) judge Tracy Petty.

The Egyptian Mau has green eyes and comes in three accepted colors: silver, bronze and smoke. Its striking spots are scattered randomly, with no discernable pattern, Petty says. Those fortunate enough to possess an Egyptian Mau know the breed’s exceptional intelligence, sensitivity and loyalty. Although its exotic look gives the breed an aloof air, the Egyptian Mau is very family-oriented, says Petty, adding, “They’re homebodies; they want to be around their people.”

The Ocicat breed came about when cat breeder Virginia Daly attempted to create a Siamese cat with Abyssinian-colored points in the 1960s, says Cheryl Hogan, a TICA judge. This produced an unintentional result called the Ocicat, which quickly became known for its unique appearance.

The Ocicat has “a wild look in a domestic package,” Hogan says, “but it was kind of an accident.”

The Savannah is a tall, lean cat with dark spots and other exotic markings. Its intriguing ancestry includes the Serval, a long-legged spotted wild cat native to Africa, Fisher says. The first known Savannah was born in 1986 to a domestic mother and a Serval father, notes Fisher. TICA is the only organization to officially recognize the breed.

Both affectionate and outgoing, the Savannah has an exceptionally long neck, legs and tall ears for a domestic cat, she says. This cat breed is very active and needs interaction on a daily basis—even while being judged at a show, the Savannah remains “assertive and active,” Fisher says.

The Savannah’s markings are made of bold, solid dark-brown to black spots, which can be round, oval, or elongated. Stripes run from the back of the cat’s head over the shoulder blades, fanning out slightly over the back, says Fisher.

The Pixiebob is a muscular, brawny cat with a “hooded” look that resembles the wild Coastal Red Bobcat found in the Pacific Northwest, says Fisher. The breed, which can be long- or short-haired, is known for its bobbed tail and the fact that many of the cats are polydactyl, she adds.

The Pixiebob originated in the 1980s when breeder Carol Ann Brewer began mating various spotted cats with short tails in Washington state, Fisher says. Brewer named the breed after one of the original cats, a female named Pixie, and the breed’s distinctive stubby tail, she says. TICA officially recognized the Pixiebob in 1995.

“A Pixiebob is very distinctive-looking,” says Fisher. “The breed has become very popular because of its unique look.”

Ideally, the Pixiebob is a brown spotted tabby ranging in shades from tawny to reddish brown, she says. The cat breed’s spots should be small and muted by heavy ticking, and their eye color is brown or green. Some cats have lynx tips on their ears. And then there’s that tail. At minimum, the Pixiebob’s tail is two inches, with a maximum length reaching to the cat’s hock, Fisher says.

The Serengeti is another spotted cat bred to look like one of its wild counterparts and is one of TICA’s newest additions.

“The breed is totally man-made—the original intent was to create what the Savannah is today but without using any wild blood,” Fisher says. The Serengeti cat was created in the 1990s by Karen Sausman of California, who wanted to develop a breed modeled on the African Serval, Fisher says. However, the Serengeti has no actual Serval blood; its ancestors include the Bengal and Oriental Shorthair breeds, Fisher adds.

The Serengeti’s black spots appear in a widely spaced, random pattern and its coat comes in a range of golden brown or gray shades and even solid black, says Fisher, but even the solid black cats sport barely visible “ghost” spots. Other striking features include the cat’s gold or amber eyes and their ears, which are large and round tipped, says Fisher.

Agile and alert, the Serengeti has a self-assured, friendly temperament. The breed can be quite vocal and loves being with its people, says Fisher. If properly introduced, the Serengeti gets along well with other pets, she adds.

Samantha Drake is a freelance writer and editor in the Philadelphia area who writes about pets, business & general interest topics.