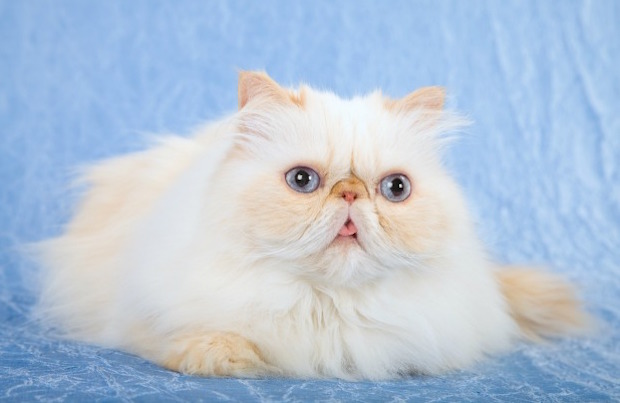 Feline eyes, which are pretty much always mesmerizing, seem to take on an extra special glint when their hue is blue.

In fact, blue eyes in a cat come from two sets of genes, one that limits expression of color to specific body areas, the other that relates to the dominant white gene that masks color. “Pointed coloration is a form of partial albinism, an adaptation to protect the cat from frostbite,” says Jacqui Bennett, a longtime all-breed judge who handles the Cat Fanciers Association Education Ring. “That gene limits color to cooler areas of the skin — legs, face, tail, ears. It’s a pattern which can be found in several CFA breeds.” Because of the pigment restriction, the top layer of the blue-eyed cat’s iris is not covered in another color, so the blue shows through.

Here Bennett gives us a close-up view of some of her favorite blue-eyed breeds.

Possibly the best known of the blue-eyed beauties, these cats display wide-set ears, a wedge-shaped head, and vivid blue eyes in deep contrast to their darker fur. The Siamese has a lean, graceful build with long legs and tails. While ‘point’ colors have expanded over the years, the breed’s original hues — the familiar chocolate, plus seal, lilac, and blue — are the ones the CFA recognizes. All, of course, have those signature blue eyes.

This breed—which began as a longhaired mutation of the Siamese—exhibits those same sapphire eyes, but the contrasting markings are a muted version of the familiar, deeper-hued Siamese color points. Balinese have longer, silky coats which lie flat and do not mat, making grooming a breeze. Like the Siamese, they’re vocal kitties, but Balinese voices are softer than those of their Siamese relatives. With long feathery tails and slender but muscular bodies, the blue-eyed Balinese is affectionate, intelligent and graceful.

Derived from the Siamese colorpoint gene combined with the Persian’s own long-coated beauty, the Himalayan—or Colorpoint Persian—bears the signature contrasting colors on its face, ears, legs, and tail. Colors range from chocolate, lilac, tortie, and ‘flame’ to cooler cream, blue-cream, and the rare but prized ‘lynx’ patterning, all of which provide dramatic contrasts to the breed’s jewel-toned eyes.

Soft as a silk sweater, Birmans have a longer ruff around their necks, long fluffy tails, and wear pristine white gloves on all paws. A Roman nose and expressive face give Birmans a sweet, gentle look. They’re usually quiet, speaking softly in a ‘chirping’ sound. Sociable and affectionate, Birmans’ vivid blue eyes are set off by the subtle shadings of their colorpoints, which the CFA describes as “a rainbow of colors,” including seal, blue, lilac, chocolate, red, cream, and tortie.

“This is a very rare breed which appears not to be linked to any certain fur color or pattern, giving the opportunity for cats with dark coats and blue eyes,” says Bennett. In 1992 there were only ten known examples of this breed, and its Spanish name translates literally to ‘blue eyes.’ The eye color is apparently a dominant gene for this breed, which dates back to the mid-1980s. In New Mexico, a blue-eyed feral female, bred to males unrelated to her, produced blue-eyed kittens.

From the parent breeds of Siamese, Balinese and Colorpoint Shorthair, the Javanese sports a medium-long coat and distinctive shades of color points: lynx, tortie or red/cream. This blue-eyed charmer is affectionate and people-oriented, communicating when he has something to say, and using a variety of ‘voices’ to convey the right message. “Like all color-points they’re born white, and as the kitten ages, the cooler areas darken while warmer areas remain cream to white in color,” said Bennett