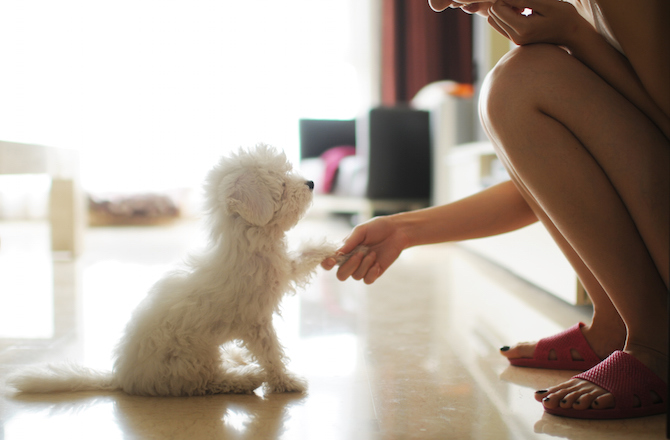 While our four-legged friends of all sizes and shades are adorable, there is something undeniably sophisticated and stylish about a small white dog. Perhaps it is their compact build that allows them to easily go out for a day of shopping, or maybe it’s how they complement your all-white, ultra-modern décor.

No matter the reason why these small white dogs capture your heart, before you add one to your home, make sure your striking new friend is the right choice for you.

“Every breed is different and requires different grooming, training, and exercise requirements,” says Gina DiNardo, spokeswoman for the American Kennel Club. “No matter the size or color of a dog, first look for a breed that fits into your lifestyle.”

Fortunately, you’ll be sure to find a white dog breed that works for your home from this list:

Also known as the Westie, West Highland White Terriers have made appearances in advertisements, films and even starred in television shows.

“Westies are a spunky, determined, self-confident terrier,” DiNardo says. “They are devoted to their owners and have a happy, lighthearted nature.”

While they only weigh between 15 and 20 pounds, the Westie is not small on personality or energy. Westies are active dogs, needing daily exercise, says DiNardo, and their coat requires daily brushing.

Like soft, white puffs of cotton, the Bichon Frise is known for its coat. Bichons are also cheerful, playful dogs that love spending time with their families, DiNardo says.

Bichons weigh between 10 and 20 pounds and are moderately active dogs who enjoy long walks and interactive play, DiNardo says. That interactive play may happen in quick bursts of energy, which may evolve into cuddly lap-time and love.

They require daily brushing and combing to keep their coats looking fluffy, and require bathing and a trim about once a month, DiNardo says.

True to their happy-go-lucky nature, Bichons are well suited for homes with children and other dogs.

The Maltese isn’t just any small white dog breed. Over the centuries, the Maltese have been the breed of choice for both actual royalty and Hollywood royalty. Famous owners have included Mary Queen of Scotts, Queen Elizabeth the I, Elizabeth Taylor, Marilyn Monroe and Barbra Streisand.

Perhaps the most diminutive dog on this list, weighing less than ten pounds, DiNardo says Maltese are gentle, affectionate and sociable little dogs. A perfect dog for the city dweller, Maltese have a low activity level, but should be taken on daily walks and engage in interactive play to keep them happy, she says.

While small in stature, the Maltese’s white coat is somewhat big in upkeep. They should be brushed daily and it is recommended that they be groomed weekly. Due to their small size, Maltese are good with older children and should only be with other dogs when supervised.

Learn more about the Maltese here.

Sealyhams may be the most hipster-looking dog on this list, with a distinctive beard that would fit right in at a food truck round up.

While not as high energy as the Westie, the Sealyham Terrier has typical terrier characteristics, such as a strong-willed, spirited nature, says DiNardo. Like other terrier breeds, the Sealyham is outgoing, friendly and adaptable, yet is also calmer and quieter than other terriers, she says. The Sealyham is moderately active, needing daily walks and interaction to stay happy and healthy.

DiNardo does note that the Sealyham’s white coat, may have lemon or tan markings on the head and ears, and while the breed has a low-maintenance attitude, it should be brushed and combed twice a week, and trimmed or stripped monthly.

Because Sealyhams were bred to hunt in packs, they tend to cooperate with other dogs, but they should be supervised when with children and other dogs, she says.

With their lovable look, it’s hard not to smile when seeing a Coton de Tulear (pronounced coTAWN day two-LEE) walking down the street. Known for their profuse, soft coat that feels like cotton, the energetic and playful Cotons are clownish, affectionate dogs that make wonderful companions, says DiNardo.

Surprisingly sturdy for their 8 to 13-pound weight, they are adaptable to a range of lifestyles, and are very loving and devoted to their families, tending to be calm and easygoing indoors, DiNardo says.

The Cotons mellow attitude also carries over to their interactions with children and other dogs, but always be sure to supervise a Coton when they interact with new children and dogs.

Unsurprisingly, with such a striking coat, the Coton de Tulear requires brushing several times a week, so it is important to instill good grooming manners in your Coton early on.