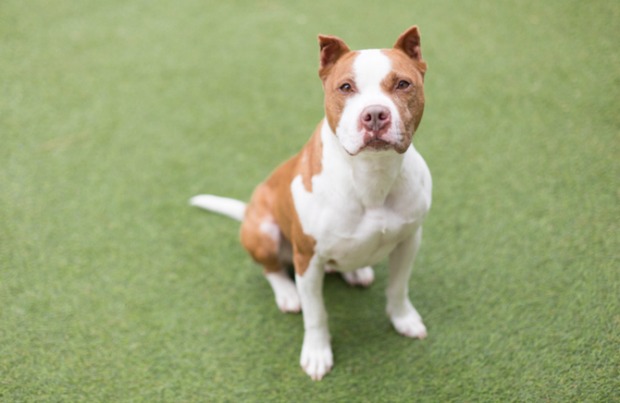 Pit bulls have made special places for themselves in history, movies, and television. But these five pit bulls may have set themselves apart for a variety of achievements.)

Bud the pit bull hitched a ride on the first road trip across the United States. In 1903, Dr. Horatio Nelson Jackson made history by driving from San Francisco to New York City in his Winston Vermont automobile. Accompanying Jackson were his assistant Sewall K. Crocker and his pit bull, Bud, who had his own goggles to protect his eyes. Bud’s goggles are now in the Smithsonian Institution, according PBS, which documented the journey in a two-hour special in 2003.

Stubby, the most decorated dog of World War I, is credited with capturing a German spy, whom the dog attacked and held until American soldiers took him prisoner, the Defense Media Network says. The commanding officer of the 102d Infantry, Yankee Division, where Stubby was a mascot, was so impressed by Stubby that he promoted the pit bull to sergeant.

Petey from The Little Rascals/Our Gang shorts of the 1920s was a pit bull. Petey’s real name was Pal and he was owned and trained by Harry Lucenary. The black ring around his eye was added by makeup and was sometimes put on the canine mascot’s left eye and sometimes on his right, the website Pitbullsontheweb.com reveals.

In the 1983 classic Flashdance, a pit bull named Jumbo Red played the role of Grunt, Alex’s faithful canine friend. The dog holds down the fort for the welder/exotic dancer as she tries to make her ballerina dreams come true.

On the beloved sitcom Parks and Recreation, Champion was the three-legged pit bull April Ludgate and Andy Dwyer adopt from the pound. Champion was played by Lucy, who was acquired from a pit bull rescue organization in 2004. “No one knows how Lucy lost her leg, but it was likely at a young age because she is so comfortable and agile,” according to NBC.com.

Samantha Drake is a freelance writer & editor in the Philadelphia area who writes about pets, business & general interest topics.