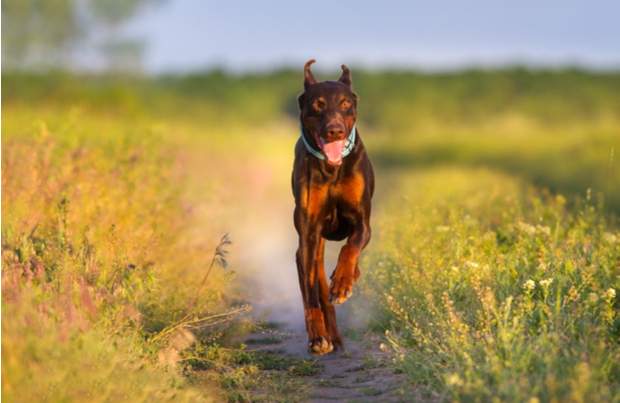 If you’ve ever watched a dog show, it’s easy to see that many breeds come from hardy stock—consider the herding group, sporting group and working group, for instance. While it is true that many dogs have been bred to excel at certain tasks, some breeds go above and beyond when it comes to their strength.

Whether it’s racing across miles of frozen tundra or working hours besides their policeman counterparts, these 13 breeds have more than earned their status as the strongest dogs:

A confident guardian that has worked to guard, drive and hold cattle throughout Europe since Roman times, the Rottie became a well-known police dog in the early 20th century, says Gina DiNardo, executive secretary with the American Kennel Club.

“These dogs are large, powerful and robust,” she says. “They’re very strong, have inherent protective instincts, and are extremely loyal. They need at least two vigorous workouts a day.”

A Spitz breed that’s over 2,000 years old, the Siberian Husky was developed for pulling sleds and warning of approaching animals and people.

“They are medium-size dogs and they excel at working on a team,” says Thom Stanfield, president of the Terry-All Kennel Club.

Siberian Huskies require plenty of exercise, are known to be affectionate and, while they don’t necessarily bark a lot, Stanfield says they have been known to “talk” a lot and howl at any siren that goes by.

“I love this breed and would recommend it to any family, as they bond quickly,” he adds.

The largest of the Arctic breeds, the Inuit tribes of western Alaska used the Alaskan Malamute to hunt and carry freight through the deep snow.

They also have a high activity level, which requires daily exercise, and although they are quite affectionate and devoted to their families, they also have independent natures.

“The breed has a powerful, muscular body,” says DiNardo. “They’re spirited and courageous, but also known for their sensitive, gentle nature. Great Danes are moderately active, needing a few good walks a day.”

Originally used as a hunting, guard and farm dog throughout Italy, the breed was also used as an “auxiliary warrior” in battles, says DiNardo.

“These dogs are athletic, muscular, and large boned,” she says. “They are very strong with a moderate activity level, needing daily exercise.”

While the Cane Corso has strong protective and territorial instincts, it is also known to be quiet, docile and affectionate.

“Elkies” are another very old breed of dog, says Stanfield. A medium-sized dog with a strong jaw and neck, they’re very strong, and their protectiveness of their owners makes them a good watchdog.

“Elkhounds are a very versatile dog, excelling in tracking, obedience, sled pulling and weight pulls,” Stanfield says. “They are extremely loyal to their family and will protect it against all odds. This breed is easily trained to do any task.”

The Doberman originated in Germany as a reliable guard dog and companion. Since then, the breed has been widely used as a war dog and police dog, says DiNardo.

“Dobermans are compact, muscular dogs that possess great endurance and speed,” she says. “They are intelligent, powerful, agile and have a high activity level. They need lots of mental and physical activity.”

The Newfoundland is an all-purpose working dog and master long-distance swimmer with lifesaving instincts in the water.

“Newfs are large, strong dogs that are heavy boned and muscular with powerful hindquarters,” says DiNardo. “The breed is well-known for its temperament—these are sweet, good-natured, gentle dogs that are devoted to their families and notoriously good with kids.”

Newfoundlands have a moderate activity level, and they require daily exercise like swimming and walking.

Impressive to look at, the St. Bernard is known for its heroic, lifesaving duties in the Swiss Alps.

“The breed was used as a rescue dog, draft dog and guard by the monks [and] saved travelers from avalanches and snow drifts,” says DiNardo. “The St. Bernard has broad, powerful shoulders and is strong and muscular.”

This breed is loyal, gentle, affectionate and intelligent. Daily walks and romps in a fenced in yard will keep him happy.

Courageous, well-balanced and muscular are a few of the words used to describe the American Staffordshire Terrier.

“These dogs are athletic and have a strong, powerful head,” DiNardo says. “Despite its historic background as a fighting dog, the American Staffordshire Terrier is known for its affectionate disposition.”

Am Staffs are sociable, very people-oriented and have a lot of energy and endurance which means they require plenty of exercise.

Bred as a hunter and protector of livestock and homes, the Rhodesian Ridgeback is a strong, muscular dog.

“The breed is still used for hunting and guarding, as well as a family companion,” says DiNardo. “Rhodesian Ridgebacks have strong protective instincts. They are athletic and need daily exercise such as running, long walks or vigorous interactive play.”

The Bouvier des Flandres was developed in Belgium as a versatile, all-purpose farm dog.

“The breed has done everything from pulling carts and driving cattle to guarding livestock and homes,” DiNardo says. “The Bouvier is a big, sturdy, powerfully built dog with strong bone. These dogs are quick learners and vigilant watchdogs.”

The breed has a moderate-to-high activity level and needs a good deal of daily exercise.

One of the oldest breeds of dog, Mastiffs have been used as guardians, hunters and war dogs.

“Mastiffs are heavy boned with a powerful neck and firm back,” says DiNardo. “They are gentle, calm and self assured.”

The courageous and loyal breed is devoted to and protective of their families, and their low-to-moderate activity level means a nice long walk will keep them happy.