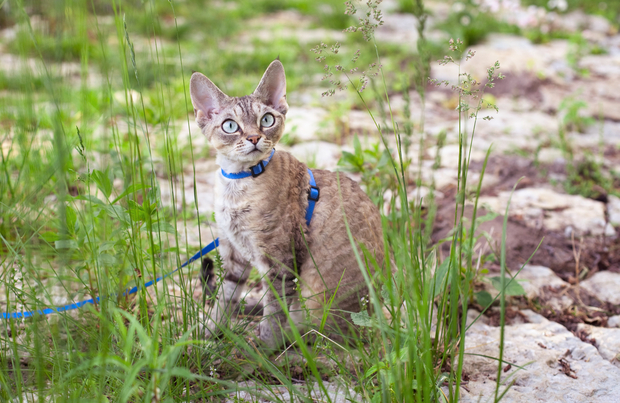 You might be familiar with your own cat’s acrobatic skills, from leaping tall bookcases in a single bound to pouncing on feet in the middle of the night, but which breeds take the cake when it comes to skills and athleticism? We’ve asked CABC Steve Dale to name the top sporty cat breeds, along with some tips on how to keep the busy.

When properly socialized, each of the breeds tends to be friendly, outgoing and almost doglike in their personalities, said Dale, who is also co-editor of “Decoding Your Dog” with Dr. Debra Horwitz and Dr. John Ciribassi (the American College of Veterinary Behaviorists authors the book). However, it is essential for these cats to have owners that have enough time and energy to interact with their cat on a daily basis or for them to have companions, like another cat or dog, to stay out of trouble.

A breed that always seems to have an agenda, Abyssinians move around the home as if they’re headed somewhere important and love having things to do and places to go, Dale said. This isn’t a cat that runs in circles for fun and doesn’t always enjoy simply relaxing in an owners lap. A medium-sized breed with a muscular body, research has shown that cats with naturally lean appearances, short hair and angular faces tend to be more active than their longhaired, larger counterparts, Dale said. This is certainly true with the Abyssinian, a friendly breed that especially does well with another companion in the home to help wear it out.

Similar to the Abyssinian in color and activity level, the Somali has longer hair than its counterpart. Curious and playful, Somalis will often greet their owners at the door and tend to be exceptionally friendly, outgoing cats, Dale said. A breed that loves human interaction and attention, it can be trained to fetch, play games and even walk on a leash. Some owners report their Somalis being able to hold cat food and objects in its paws like a monkey as they explore their homes from top to bottom.

All breeds on this list, like the Somali, love activities like leash training and even agility as a positive and productive outlet for their energy, Dale said. They’re also bred to be with their people and enjoy being involved in household activities.

Easily recognized by its wild appearance, the Bengal cat also retains its energetic and very active personality from its Asian leopard cat ancestors, Dale said. Exceedingly intelligent, Bengals need a job to do (almost like a Border Collie or Australian Shepherd) and like investigating every nook and cranny of a home, Dale added. With a lush, dense coat that has distinctive spots in a marbled, rosette, horizontal or random pattern, Bengals enjoy the company of their people and will do best with a family that has an active lifestyle and is willing to incorporate their Bengal in their activities around the home. From playing games with your Bengal to enlisting another pet in the home (either a cat or dog) to keep them occupied, it’s important to provide a sporty cat with plenty of outlets for their energy.

Called the Greyhound of the cat world because of their sleek look and short, single coat, the Cornish Rex is particularly friendly with people and loves learning, Dale said. A naturally curious breed that can get itself into things around the home and enjoys having fun, the Cornish Rex’s soft, curly coat sheds less than other breeds which may make it suitable for people who have allergies.

Another intelligent, affectionate breed that enjoys nothing more than cuddling up with their people and keeping warm, the Devon Rex is also an active breed but tends to stay out of trouble when its people aren’t at home. With a short, wavy coat that has a washboard-looking appearance, Devon Rexes will shower their people with attention and make tireless playmates.

A breed that excels in agility activities for cats, according to Dale, the Egyptian Mau loves to run, jump and play. A long, graceful breed with a unique set of spots, which can come in a variety of shapes, and markings, Egyptian Maus are also recognizable by their faces, which have an M-shaped mark on the forehead and two black lines across the cheeks. Known for its even temperament and trainability, the breed is particularly good at fetching items for its owners, which may be a trait passed down from its ancestors who were used to retrieve game.

A medium-sized breed with a slender, athletic build, the Japanese Bobtail is a friendly, intelligent cat that loves being with its people and gets along well with other cats it’s been raised with but may be skeptical of new pets or cats in the home, Dale says. If you plan to get your Japanese Bobtail a companion to keep it engaged, be sure you properly introduce the cats and socialize your Bobtail with other animals from an early age on. A breed that craves attention and has been known to play in water, the Japanese Bobtail enjoys interacting with children and loves jumping and prancing around the home.

The Ocicat was bred to have a wild look but, unlike the Bengal, has no wild cat ancestry, Dale said. An incredibly loyal breed that is social with other pets and tends to accept new cats into the home more easily than others, the Ocicat will often use its athletic abilities to jump onto high bookcases or shelves and explore its surroundings. Recognized by its exotic build and distinctive spotted coat, Ocicats are able to learn commands and can be leash trained to provide an outlet for their energy.

Social and outgoing, the Siamese loves human companionship and will happily spend the day chattering away to its owners about what it wants and when. A breed that thrives playing games with other cats, Siamese do well in pairs and are generally happy to spend time in their owner’s lap provided they receive enough regular activity. With large ears, blue eyes and a sleek, slim build, the Siamese has a short coat that’s easy to maintain and comes in four colors: seal, chocolate, blue and lilac point. If left alone too often, the Siamese can get lonely and sad fairly quickly and will be sure to let you know when they’re unhappy.

With a fuller coat than its Siamese relatives, the Balinese is also very active, affectionate and people-oriented. When socialized at a young age, they tend to travel well and excel in agility and leash training, Dale said. Another chatty breed, the Balinese loves jumping and climbing and plays well with other cats.

An active, extroverted breed with a naturally high prey drive, the Oriental Shorthair loves playing, especially with toys that it can pounce on, Dale said. Similar in body type and personality to the Siamese, the Oriental Shorthair differs in that it comes in a wide variety of colors and patterns, including pure white, ebony, chestnut, bi-color and tabby. A breed that loves being the center of attention and may become cranky if ignored, the Oriental is less communicative than the Siamese but will still do best in a home with attentive owners that have multiple pets or are willing to interact with it regularly.

The smallest of all cat breeds, the Singapura retains its kitten-like looks and personality throughout its lifetime and loves performing and spending time with people. A social, highly affectionate breed, the Singapura is trusting and devoted and can befriend nearly anyone.