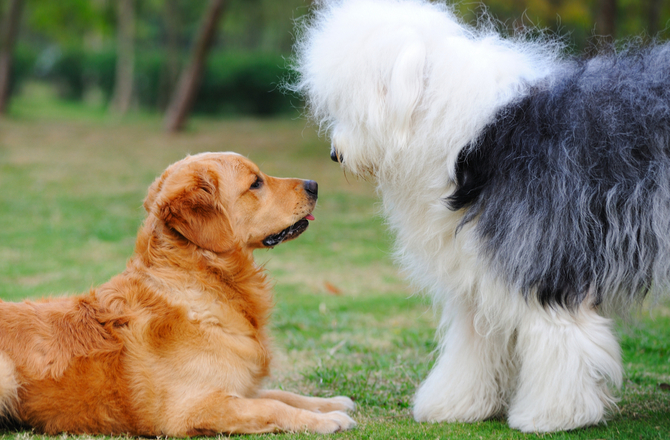 We all know how great Golden Retrievers are for families. We’ve seen the adorableness that is a Corgi’s backside and extolled the virtues of French Bulldog-themed everything. But what about the dog breeds that fly under the radar? Surely there are other dogs who are just as adorable and family-friendly out there, right?

If you’re looking for breed that is often overlooked and highly underrated, these 10 breeds are for you:

The Labrador Retriever has been the No. 1 most popular dog breed in the United States for a record-breaking 26 years, but what if you want a breed that’s just as family-friendly, trainable and easy to care for and also happens to be a little less well known?

“Not everyone wants a cookie-cutter dog,” says Gina DiNardo, vice president of the American Kennel Club. She recommends the Curly-Coated Retriever, which “looks like a lab with a perm.”

With its distinctive coat of tight, water-resistant, curls, this strong, agile breed was developed to be a hunting dog and is one of the oldest breed of retrievers. The Curly-Coated Retriever loves to be around its people and needs daily exercise to keep from getting bored.

More Than a Guard Dog: The Doberman Pinscher

If you love German Shepherds (the second most popular breed on the AKC list in 2017), consider the Doberman Pinscher. The breed originated in Germany in the late 19th century, taking its name from tax collector Louis Dobermann, who wanted a medium-sized guard dog that was also a companion.

Once favored the police and the military, the breed was known for its intelligence, strength and endurance, but Dobermans are much more than their historical job description. According to the AKC, Dobermans are also affectionate, obedient and loyal, and make good family dogs. “Those that know Dobermans love them,” DiNardo says.

A Quiet Yet Playful Protector: The Bull Terrier

Bulldogs are consistently one of the AKC’s top five most popular breeds. Often overlooked is the Bull Terrier, which combines the best of the Bulldog and various terrier breeds. The AKC describes this playful breed as “a three-year-old child in a dog suit.” While the muscular Bull Terrier can seem a bit aloof, the truth is that the breed has a sweet, loving temperament. With a short, glossy coat, Bull Terriers need little grooming.

The breed also rarely barks without a good reason, so be sure to listen when your Bull Terrier does speak up. Bull Terriers make great family pets and can be very protective, says DiNardo. “They have a lot of fire to them,” she adds.

A Low-Maintenance Cuddler: The Japanese Chin

The Japanese Chin is one of the lesser-known lap dogs. Despite its name, the small breed originated in China, not Japan, and was bred to be a companion. The sensitive and intelligent Japanese Chin is cat-like in nature, imperiously running their household. The breed is also fastidious, mischievous and occasionally stubborn.

According to the AKC, the breed’s silky, flowing coat is surprisingly low maintenance, although it does require regular grooming. The Japanese Chin also doesn’t need a lot of exercise,” says DiNardo. “They’re good apartment dogs.”

Calmer Than the Average Terrier: The Cesky Terrier

The Cesky Terrier is basically a cross between the better-known Scottish Terrier and Sealyham Terrier. The muscular, short-legged Cesky has wavy facial hair and a coat that comes in several shades of gray. The breed was developed in the early 20th century in what is now the Czech Republic. An active breed that loves to dig, the Cesky Terrier requires daily exercise.

The AKC notes that, among the many terrier breeds, the Cesky Terrier is one of the calmest and can be reserved around strangers. “Cheskys are less excitable and less feisty than most terriers,” says DiNardo.

Active and In Demand: The Brussels Griffon

A toy breed with a fancy name, the Brussels Griffon is not the typical pampered little dog. The breed has a terrier-like disposition and makes a good watchdog. The Brussels Griffon originated in Belgium in the early 1800s, where it was used to hunt rats.

Intelligent, sensitive and active, the Brussels Griffon loves to be with his people and needs daily exercise. “It’s a great, devoted breed,” says DiNardo. But demand for the low-shedding breed often exceeds the supply, so there tends to be a waiting list for a Brussels Griffon, she adds.

A Compact Body with a Big-Dog Spirit: The Toy Manchester Terrier

Once bred to kill rats and chase rabbits for sport in Manchester, England, the Toy Manchester Terrier is fast and fearless. The smooth-coated breed is mahogany tan and jet black, and is a smaller version of the Manchester Terrier. “It’s a great, unsung breed,” DiNardo says.

A friendly breed, the Toy Manchester Terrier gets along well with children and other dogs. It’s one of the few terrier breeds that developed in an urban environment. The AKC says the breed is a good choice for city dwellers looking for a small dog with “big-dog style.”

A Distinctive-Looking Companion: The Schipperke

Another terrier alternative that gets overlooked, “Schipperke” means “little captain” in Flemish, according to the AKC. The distinctive breed stands no higher than 13 inches and has a thick, black coat. It also has “a beautiful little foxy face,” says DiNardo. “They’re just lovely.”

Developed in Belgium to be low-maintenance vermin catchers and watchdogs, the Schipperke has evolved into an endearing companion. The Schipperke is hardworking, intelligent and independent, but can also be mischievous and playful.

Gentle as a Lamb: The Bedlington Terrier

The Bedlington Terrier is easily recognizable, with a face that looks like a lamb’s, fleecy coat and arched back. But not too many people think of this breed first when selecting a dog.

Named for a mining shire in England, the Bedlington Terrier is a natural hunter of vermin. The breed is mild-tempered, energetic but not rambunctious, intelligent but not mischievous, making it the perfect pet for a family with children.

“They love people and have a nice disposition,” DiNardo says. The Bedlington Terrier’s non-shedding, unique coat is also a plus.

More Than a Hunter: The American Foxhound

“If you like the look of a beagle but you want a bigger dog, try an American Foxhound,” DiNardo says.

Samantha Drake is a freelance writer & editor in the Philadelphia area who writes about pets, business & general interest topics.