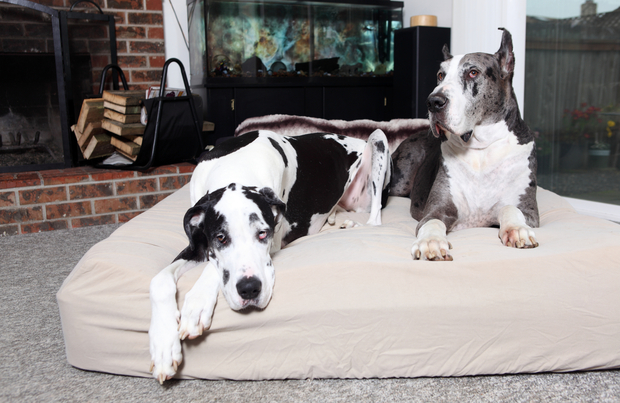 With busy work days and packed weekend schedules, sometimes we all need to take a cue from our pups and do one thing – relax. While it may seem impossible to calm down and chill out for some people (and dogs!), others can hit the “relax” button fairly quickly.

Here’s a list of breeds that, if raised and socialized properly, are generally calm around the home, courtesy of David Frei, the co-host of the Westminster Kennel Club Dog Show and expert analyst for The National Dog Show Presented by Purina.

Originally developed as a hunting dog that was large enough and had the stamina to hunt and retrieve a large number of game birds at once, Golden Retreivers are now among the most popular family pets, service animals and search and rescue dogs. Loving and eager to please, Golden Retreivers enjoy playing games and socializing with people, children and other animals and can be calm at home with appropriate daily exercise and activity.
dog toys
While these breeds can all be relaxed by nature, many dogs can go from “mellow to intense in 6 seconds,” Frei said. If you know your dog is easily stimulated by dog toys, dog treats, phrase (like “go out”) or activity, prepare for it to become much more active the moment you pull out the doggy cookie jar or make a move for the leash.

A loving and loyal family dog that is generally good with children and other animals, Labrador Retrievers love learning new things and playing games. Developed in Newfoundland as a fishing and retrieving dog, Labradors like having a job to do and will be calm at home if they’ve had a good round of fetch or an interactive game to play with.

Dogs that are given a job to do during the day or have activities that they’re involved in, from therapy work to long walks and trips to the dog park, will likely be more calm at home, Frei said. Having the satisfaction of having done something during the day can wear them out and help them relax in the evening.

Though they’re intense on the racetrack, Greyhounds (particularly rescued Greyhounds) can be wonderful family dogs that are calm and relaxed at home, Frei said. An ancient breed that has been used as a sight hound in addition to a racing dog, Greyhounds are very gentle with people and other dogs and can easily live in an apartment setting. Relaxed and low-key at home, the breed does have a tendency to chase after cats or other small animals and may not be the best choice for families with small pets.

Known for its agility and speed, the Afghan Hound can be an intense hunter in the field but is generally calm and relaxed at home. With long, drooping ears and a curved tail, Afghan Hounds have a tall, proud stance and may be aloof in nature. A gentle breed, Afghan Hounds can usually become a part of a multi-dog family. Provided they receive appropriate exercise and are given the opportunity to run, the Afghan Hound will fare well in either the city or the country.

A large, muscular hunting dog bred in Europe for lion hunting, protection and companionship, Rhodesian Ridgebacks can be serious hunters but are calm, relatively easy keepers. Though they may be reserved with strangers, Ridgebacks do well with other dogs and can be friendly towards cats that they have grown up with. They require plenty of daily physical and mental exercise to stave off boredom but prefer to sleep indoors as a part of the family.

A dogs training, socialization and environment will all determine how relaxed or calm it is, Frei said. A dog raised in an apartment setting compared to a dog given wide open spaces to run in every day will be very different from each other and will have different behaviors around the home.

Bred as a war dog and wild boar hunter, Great Danes are more commonly seen now as a loving and loyal companion pet. Though it is an extremely large breed, Great Danes have moderate energy levels and don’t require too much exercise, Frei said. Known for being a lap dog in a giant’s body, the Great Dane is affectionate with its people and does well with children and other animals when raised together.

Another gentle giant, the Saint Bernard is known for its exceptional life-saving during the 1600s in the mountains of Switzerland and Italy and has also worked pulling carts and acting as a watchdog. Now, the Saint Bernard is among the most popular giant dog breeds, easy-going around people and good natured and calm at home. Because of its size and thick coat, Saint Bernards require plenty of daily exercise and regular grooming.

The original lap dog, according to Frei, the Maltese is an ancient breed that became popular among English royalty during the 1800s. A playful, self-confident breed, the Maltese is among the most popular toy breeds for its affectionate and gentle demeanor. A fearless dog that can make a good watchdog for its tendency to bark at strangers, Maltese are relaxed and calm at home provided they receive proper exercise and stimulation from training or play.

A wonderful, happy family dog that loves being with its people, according to Frei, the Bulldog may have originated for the purpose of bull baiting in England but now enjoys its status as a popular companion dog. The definition of a couch potato, the Bulldog loves to eat and sleep and is generally relaxed at home. Although the breed doesn’t require too much activity, it should have daily walks to keep it stimulated and help prevent obesity.

While any one of these breeds may be perfect for you because of their propensity to be relaxed and calm with proper training and socialization, it’s also important to learn as much as you can about a potential pet’s behaviors, temperaments and certain medical conditions before making a commitment to one. Dogs don’t necessarily come with certain personality traits, like calmness or a relaxed nature, says Frei. These behaviors take plenty of training, proper exercise and the exposure to a variety of people, places and things from an early age on.

Jessica loves writing about pets and spends her days trying not to helicopter parent her beloved shelter pup, Darwin.