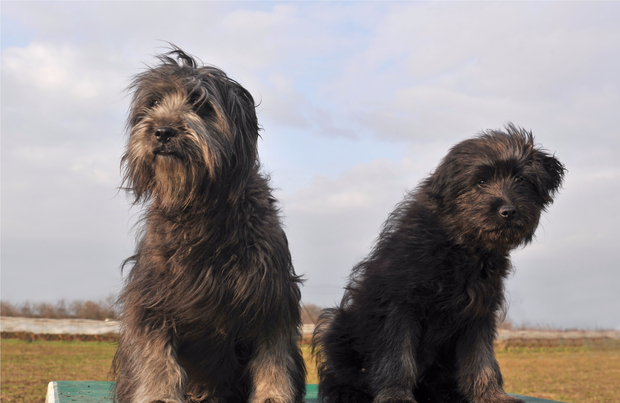 Looking to expand your pet family with a rare breed of dog? We’ve asked an expert at the American Kennel Club to share ten lesser-known breeds with a bit of information on how they originated.

The Norwegian Lundehund has several unique characteristics in combination not found in any other dog, including six toes on each foot, ears that fold closed, forward, and backward at will, and the ability to tip their head backwards until it touches their back bone, said AKC spokesperson Lisa Peterson.

These physical traits all helped the breed perform its original job as a Puffin hunter. When the bird became a protected species in the 1800s, the breed numbers dwindled. They were saved from near-extinction after World War II in Norway, Peterson said, but their numbers today remain limited. Today, Peterson says their even temperament, small size and charming personality makes them a wonderful, easy-to-live-with pet.

Originally bred to hunt otters and badger, the Dandie Dinmont Terrier makes an excellent housedog, Peterson said. In addition to their hunting qualities, they’re intelligent, enjoy children and make excellent guard dogs. They do, however, have a will of their own and will sometimes obey commands reluctantly, requiring a strong hand in training. The Dandie Dinmont Terrier also has an interesting appearance, Peterson said, with a fluffy head of hair, long and low body and tail curved like a sword.

Developed in England to hunt otter that preyed on fish in the country’s rivers and streams, the Otterhound is a large, strong dog with a rough double coat and substantially webbed feet. The breed became less popular in England when otter hunting was banned and never ended up gaining wide popularity in the United States, Peterson said. Recognizable by their striking, shaggy coat, Otterhounds are also amiable, even-tempered and unfailingly devoted to their families.

The Xoloitzcuintli (pronounced show-low-eats-queen-tlee) or Xolo is one of the world’s oldest and most rare breeds, Peterson said.

Having originated in Mexico, the Xolo is known as the first dog of the Americas. The breed was first AKC-registered from 1887 to 1959 as the Mexican Hairless, but efforts to establish the breed was met with little success because no large-scale breeding programs existed to promote good quality in the breed, Peterson said. Today’s Xolo re-entered the AKC in 2011 and comes in three sizes—toy, miniature and standard and can be hairless or coated. The breed also has a unique and unusual history.

“With a reputation as a healer, the breed and its warm skin is often put to use in remote Mexican and Central American villages to ward off and cure ailments like rheumatism, asthma, toothaches and insomnia,” Peterson said.

Originally used as a field dog in the 18th century in Sussex, England, the Sussex Spaniel was a popular hunting companion used for its skill in flushing and retrieving upland game, Peterson said. Due to the difference in terrain between the United States and England combined with the fact that the breed doesn’t hunt as quickly as other breeds, the Sussex Spaniel isn’t very popular in the U.S.

“Despite its somber and serious expression, the Sussex is friendly with a cheerful disposition,” Peterson said. “They enjoy walks with their families and are good with children and other dogs.”

With a similar appearance to the more popular Cavalier King Charles Spaniel, the English Toy Spaniel is similarly-sized with a merry and affectionate personality. A good family companion that plays well with children, Peterson said their small size also makes them ideal for apartment living. “The breed even still has some hunting instinct and can be a fine small hunting spaniel,” she added.)

Used alongside the Great Pyrenees as a sheep herding dog, the Pyrenean Shepherd originated in the French Pyrenees Mountains and could cover up to 25 miles a day doing chores with its owner.

According to Peterson, it’s said that just two Pyrenean Shepherds were enough to manage a flock of 1,000 sheep! The breed has a lively, cheerful disposition and excels at agility training and other dog sports. They’re active and enthusiastic and insist on being involved in the day’s activities, whatever they may be, Peterson said. The breed has two types of coat—rough or smooth-faced—and requires minimal grooming.

One of America’s native and most rare breeds, the American Foxhound was originally used for foxhunting. With the declining popularity of the sport, the breed has become more and more rare, Peterson said. Because of their energy, they make great pets for families that live in rural areas or on farms and are mild tempered and easy going. With a coat that comes in a variety of colors, the American Foxhound requires minimal grooming and maintenance.

A group of breeders began reviving the breed in the 1920s and since then they’ve started to appear more frequently in Ireland. Because of their kind nature and friendly attitude, Irish Red & White Setters make great family dogs. Best of all? Their coats require less grooming and trimming compared to the Irish Setter since they don’t have as much hair as their cousins.

A native of Switzerland and the smallest of the four tri-colored Swiss Mountain Dogs, the Entlebucher Mountain Dog has been used as a herding and general all-purpose dog in Switzerland. The breed also excels at competitive sports and participates enthusiastically in any athletic canine activity chosen by their master, Peterson said. Though the Bernese and Greater Swiss Mountain Dogs are much more popular breeds in the U.S., Entlebuchers are active, high-energy breeds with smooth, short coats that require minimal grooming.